The cost of the political and economic crisis that erupted between Russia and Turkey after the shooting down of a Russian plane in November is multiplying by the day. First, the effects of the economic sanctions Russia has been applying on Turkey as of Jan. 1 were reflected by Turkish export figures in January. According to figures released by the Exporters Assembly of Turkey, January exports were 14.4% lower this year than in the same month in 2014. 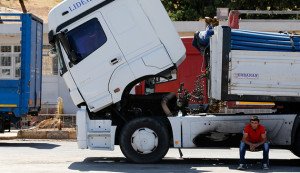 Russia stopped imports of Turkish fresh fruits and vegetables and terminated the work of Turkish tour operators by canceling all tours to Turkey. Prime Minister Ahmet Davutoglu, when announcing the Emergency Support Action for Tourism to prevent even worse losses in that sector, invited Russian tourists to come to Turkey.

The Union of Chambers of Agriculture of Turkey said there has been a sharp decline in exports of fresh produce as a result of the Russian sanctions and asked the Turkish government to support producers and exporters. It warned, “There has been a 38.4% decrease in our fresh produce exports following the crisis with Russia. Exports that had totaled $215.2 million in January 2015 are down to $132.7 million in January 2016.” 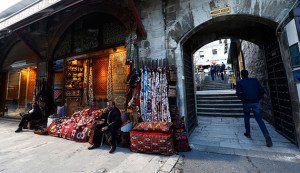 Trade is down sharply at the Arasta Bazaar in central Istanbul, photo on Jan 12, 2016 (Murad Sezer, Reuters)

But another development not listed among Russian sanctions has inflicted even heavier damage on the Turkish economy. When Russia did not renew the Turkey-Russia Road Transport Accord that expired Feb. 1, all commercial road transport between the two countries and via Russia to Central Asia and other regions halted entirely. Thousands of Turkish 18-wheeler semis are now idle.

According to the International Road Transport Union, Turkey retaliated by halting the movement of Russian trucks to Turkey. But the losses accruing to Turkey, which has the largest 18-wheeler fleet in Europe, will be far higher than those of Russia.

Russia had already made issuance of temporary passage documents to Turkish roads more difficult after relations with Turkey began to sour flowing Russia’s entry to the Syrian war. The crisis that erupted after the plane incident made life much more difficult for Turkey’s producers and transporters. The option of using roll-on, roll-off ferries via Azerbaijan has not been enough to solve the problem.

Until Feb. 1, the road accord between Turkey and Russia was being automatically extended every year; the two countries long cooperated on finding ways to avoid bottlenecks in exports and transport.

Turkey and Russia had been annually issuing 8,000 documents for temporary passage, 1,500 for transit passage and 5,000 for transport to third countries. When Russia wanted to reduce this year’s numbers to 2,000 temporary, 2,000 transit and 500 third-country passage documents, the accord could not be renewed. Moreover, as of Jan. 1, when Russia reimposed visa requirements for Turkish nationals, the problem has become worse as it has been difficult to find drivers who have Russia visas.

Cetin Nuhoglu, the chairman of the board of the International Transporters Association, which covers all road transport companies in Turkey, said there was  a 4.5% reduction in the hauling of exports last year. “In 2015, of 1.5 million truck trips to foreign markets from our country, one-fifth were done with trucks from other countries. The worst losses in our export trips were seen in trips to the Commonwealth of Independent States and the Central Asian market, while our trips to Russia and Iraq have come to a standstill,” he said.

Nuhoglu’s comments dealt with a period before the accord with Russia expired. As such, worse outcomes are expected in 2016.

Turkey, which has been feeling the effects of political, military and diplomatic tensions on its economy, experienced a similar situation with Egypt. Turkey has lost access for its exports to the Gulf, other parts of the Middle East and North Africa because of the clashes in Iraq and Syria. In 2012, Turkey signed an accord with the Egyptian Muslim Brotherhood-affiliated Mohammed Morsi regime that granted Turkey a privileged status. With that accord, Turkish exports carried by Turkish trucks were being carried on roll-on, roll-off ferries between the Turkish port of Iskenderun to Egyptian ports and onward to North Africa and the Middle East, including the Gulf countries. Attractive discounts, facilities and privileges were granted to Turkish vehicles in Egyptian ports and when crossing the Suez Canal.

When a military coup deposed the Morsi regime, Turkish President Recep Tayyip Erdogan declared that he did not recognize the coup leader, Gen. Abdel Fattah al-Sisi. In response, the Sisi regime unilaterally refused to extend the accord that ended in April of last year. Turkey was the loser.

Turkey now has to decide whether it will use trucks from Belarus, Moldova and Georgia or will have Turkish companies haul its exports and then reload them onto trucks from third countries that have no problems with Russia. In that case, the winners, of course, would be the trucks and companies from other countries.

Turkey saw its monthly exports fall below the $10 billion mark for the first time since 2011 in January while regional political crises dealt a major blow to Turkish sales to such traditional markets as Russia and the EU, government data showed on Monday.

Turkish exports amounted to $9.6 billion in the first month of 2016, a 22 percent decline from a year ago, the Turkish Statistics Institute (TurkStat) said on Monday. The TurkStat data revealed that imports hit $13.4 billion in the same month, a 19.7 percent decline year-on-year. In January, Turkish exports to Russia fell drastically by 65 percent year-on-year, Monday’s data found. This shows how a lingering diplomatic crisis between Ankara and Moscow over a downed Russian jet by Turkey and its Syria policy take a toll on Turkish trade with Russia.

The shooting down of a Russian jet by Turkey in late November bore instant repercussions for the Ankara-Moscow relationship, and Moscow responded harshly with a number of economic measures against Turkey that are expected to result in major losses. The Russian crisis is feared to lose Turkey as much as $2.2 billion in exports in 2016, analysts have warned. Russia did not even make it to the list of top 20 buyers of Turkish goods in January.

Early indicators suggest that Turkey may even fail to realize a 2016 yearend exports target of $155 billion, market experts said on Monday. In the same period, the Turkish foreign trade deficit narrowed more than expected, helped by a huge slump in global oil prices. The deficit fell to $3.76 billion in January from $4.3 billion in the same month of last year, TurkStat said on Monday. Compared with the preceding month, the seasonally and calendar-adjusted exports declined 1.5 percent in January and imports dropped by 1.5 percent. The Turkish energy bill stood at $37.8 billion in 2015, down from $54.9 billion in 2014.

Germany was the top buyer of Turkish goods in January with $1.09 billion, followed by the UK with $650 million, Italy with $570 million and Iraq with $469 million. Turkey paid the highest amount for Chinese goods with $1.92 billion in January while Russia sent the second highest imports to Turkey with $1.34 billion, Germany with $1.16 billion and Italy with $606 million. Meanwhile, Turkey’s index of economic confidence tumbled 14.8 percent in February, TurkStat said separately on Monday, hitting its lowest level since the data were first compiled in January 2012. The index was at 71.46 in February compared with 83.88 in January. It indicates an optimistic outlook about the economy when above 100 and a pessimistic one when below 100. In November it had risen sharply following the ruling Justice and Development Party’s (AK Party) election victory.

The lira traded at 2.9617 versus the US dollar on Monday, slightly above the figure last seen on Friday, while the benchmark index Borsa Istanbul (BIST) was 0.56 percent higher at 75,346 points.