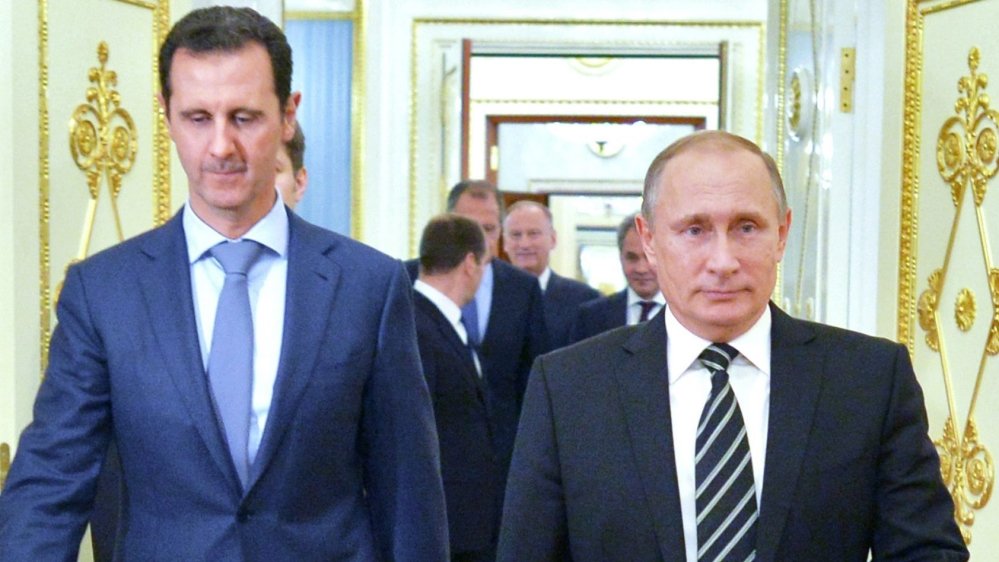 Russian President Vladimir Putin shakes hands with Syrian President Bashar al-Assad during a meeting at the Kremlin in Moscow on October 20, 2015 [Reuters/Alexei Druzhinin]

What exactly are Russia’s aims in Syria? To achieve a lasting political solution, says Andrew Korybko

The Putin-Netanyahu Summit on Victory Day really did change everything, and Russia is no longer shy about showing the world its desire to “balance” “Israel” and Iran in Syria.

It couldn’t get any clearer – Russia is without a doubt “urging” Syria to “compromise” on a so-called “political solution” to its long-running crisis, and to do so as soon as possible in order to avoid a larger Mideast war. The groundbreaking Putin-Netanyahu Summit that took place a couple of days ago in Moscow on Victory Day was bookended by two back-to-back “Israeli” bombings of Syria within a 24 hour period, all of which was followed by Russia reportedly declining to sell S-300s to Syria. There’s no other way to analyze this than to see it for what it truly is, which is Russia utilizing various means to “urge” Syria to “compromise” on its hitherto recalcitrant position in refusing to make tangible progress in adapting the 2017 Russian-written “draft constitution” for “decentralization” (and possibly even “federalization”) and “complying” with Moscow and others’ “request” that it initiate the “phased withdrawal” of Iran’s elite Islamic Revolutionary Guard Corps (IRGC) and their Hezbollah allies from the Arab Republic.

The suddenness with which Russia moved may have caught many Alt-Media observers by surprise, but that’s only because many of them were brainwashed by the community’s dogma that Russia is “against” “Israel” and supposedly on some kind of “anti-Zionist crusade”, which it definitely isn’t. Instead, Russia and “Israel” are veritably allies and the events of the past couple of days prove it. That said, just because Russian foreign policy seems (key word) to be “pro-‘Israeli’” doesn’t in and of itself make it “anti-Iranian”, at least not how Moscow conceives of it. Rather, Moscow believes that it’s fulfilling its grand geostrategic ambition to become the supreme “balancing” force in 21st-century Eurasia, to which end it’s playing the globally irreplaceable role of preventing the current “Israeli”-Iranian proxy war in Syria from evolving into a full-fledged conventional one all throughout the Mideast. This concept is a lot for some people to digest, so it’s requested that they reference the following background texts in order to catch up to the present state of affairs:

* “Does Anyone Still Seriously Think That Russia And Israel Aren’t Allies?”

* “President Putin On Israel: Quotes From The Kremlin Website”

* “The Syrian Show Must Go On”

The gist of all of this is that Russia’s excellent relations with “Israel” are part of its envisioned hemispheric “balancing” act in deterring its many diverse and in some cases rivalling partners (such as “Israel” and Iran) from resorting to military means to settle their disputes and to instead rely on Russian-mediated diplomatic efforts to broker a “political solution”, whether openly or clandestinely through “gentlemen’s agreements”. In the Syrian context – whether one thinks it’s “morally/ethically” right, wrong, or feels indifferent towards it – Russia has determined that the “Israeli”-Iranian proxy war will continue to escalate so long as Damascus allows the IRGC and Hezbollah to retain their military presence in the Arab Republic after the defeat of Daesh, the latter event of which should have served as the trigger for allowing those two a “dignified” and “phased” withdrawal from the country but ultimately didn’t because of Damascus’ desire to play off Tehran and Moscow in a bid to reap strategic benefits from both.

Walking The Tightrope Between Tel Aviv And Tehran

In addition, there are also very serious matters of national pride when it comes to Syria’s relationship with its Iranian and Hezbollah Resistance allies, both of whom proved themselves as the country’s most loyal partners in the military and ideological senses. It’s all but politically impossible for President Assad to “comply” with what is quickly becoming the “international community’s” informal “request” for him to ‘compromise” on his country’s ties with these two because his domestic base might be tempted to perceive this (whether rightly or wrongly) as “selling out” and having fought this war “for nothing” since these terms were present from the very beginning of the conflict. The Syrian government refused to remove both of them from the country over seven years ago as a “compromise” for preempting what has since turned out to be one of the worst wars of this century so far, so it’s unlikely that it will do so now no matter how much “pressure” is put upon it, including from its Russian partners.

The contradiction between Syria’s “maximalist” approach in wanting to liberate “every inch” of its territory (which is its sovereign and legal right) and Russia’s “pragmatic” one in recognizing the impossibility of this reality and declining to get militarily involved in advancing these plans (which would correspondingly include forcibly removing NATO members Turkey and the US from the Arab Republic) have led to a “strategic dilemma” between the two partners whereby Damascus is intent on dragging its feet and procrastinating in order to avoid the political (“new constitution”)and military (“phased withdrawal” of the IRGC and Hezbollah) “compromises” that Moscow’s “solution” entails. Russia respects that Syria has informally made the choice to avoid committing to either of these two interlinked prospective means for resolving the crisis, but it nevertheless won’t stop trying to “convince” Damascus that the options presented before it are what Moscow believes to be the “best” ones that will ever be offered from this point forward.

In pursuit of its peacemaking objective to get Syria to “compromise” on the terms that Russia has presumably presented it with in order to avoid escalating the “Israeli”-Iranian proxy war inside the country to the point where it becomes a conventional one all throughout the region, Moscow has apparently decided to send very strong symbolic messages to Damascus to let it know just how serious it is about this. The most powerful signals that sent shockwaves through the Alt-Media and likely also the global diplomatic communities came from the Putin-Netanyahu Summit and Russia’s passive “acceptance” of “Israel’s” latest bombing run against what Tel Aviv claimed were Iranian units in southern Syria. Furthermore, Russia’s reported reconsideration of possible S-300 sales to Syria also stands out in the starkest terms as an informal statement declaring Moscow’s unwillingness to contribute to anything that would “compromise” “Israel’s” ability to bomb suspected Iranian and Hezbollah targets at will.

Referring back to the title of this analysis, it couldn’t be any clearer that Russia is “urging” Syria to “compromise” as soon as possible, though it’s uncertain whether Moscow’s latest messages will get Damascus to “comply” or if it will continue digging in its heels to resist all international “pressure” to do so. Time is running out, however, because “Israel” has signaled that it’s run out of patience with this “game” and will utilize all means at its disposal to remove Iran and Hezbollah from Syria once and for all, counting as it will on open US and Gulf backing alongside Russia’s implicit support. Moscow’s passive involvement in these “containment” measures is a real game-changer and dramatically alters the strategic dynamics of the “Israeli”-Iranian proxy war in Syria, making it more likely than not that the odds will decisively shift in Tel Aviv’s favor with time unless Damascus “cuts a deal” and freezes the state of affairs before it gets any worse than it already is.

DISCLAIMER: The author writes for this publication in a private capacity which is unrepresentative of anyone or any organization except for his own personal views. Nothing written by the author should ever be conflated with the editorial views or official positions of any other media outlet or institution.