Russia has demanded consultations with the World Trade Organization and Kyiv over Ukrainian sanctions, which it believes have violated the organization’s rules. If the consultations are not fruitful, Russia may seek legal action against Ukraine. 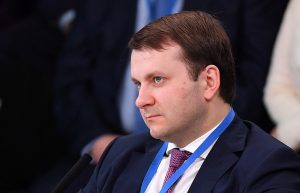 Russian Economic Development Minister Maxim Oreshkin announced the decision on the sidelines of Asia-Pacific Economic Cooperation (APEC) ministerial meeting, where he met with WTO Director-General Roberto Azevedo. “Russia has sent to the WTO’s Dispute Settlement Body and Ukrainian government a request for consultations on restrictions being repeatedly imposed since 2014,” the minister told reporters.

Kyiv calls the restrictions on Russian goods, services, transit and other industries a response to Russia’s alleged role in the ongoing crisis in Eastern Ukraine.

“There are serious grounds to believe,” according to Oreshkin, that measures, undertaken by the Ukranian government, violate its obligations toward the WTO.

“Moreover, the number of anti-Russian measures, their nature and the scope of sectors affected, show that Ukraine systematically and consciously violates its international obligations, ignoring the rules of international trade and other international law standards,” the minister added. “Some of these measures are not protecting Ukrainian economy but instead creating additional problems.”

A request for consultations is the first step of filing a complaint to the WTO. According to WTO rules, the consultations must take place within two months to find a solution to the outstanding issues. If the negotiations are not fruitful, Russia might undertake legal action and file a case to an arbitration group, the minister warned.

The decision came the same week as Ukrainian President Petro Poroshenko imposed one of the most sweeping bans on Russian companies, including popular social networks VKontakte (VK) and Odnoklassniki, used by millions of Ukrainians, as well as cyber security company Kaspersky Lab, search engine Yandex Ukraine, 1C Company, which provides popular business tools, and several other Russian online firms. The main reason for the controversial decision was proclaimed to be “bolstering the country’s national security.” 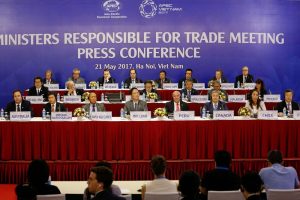 “The Russian delegation at the WTO in Geneva sent a request to the WTO Dispute Settlement Body and the Government of Ukraine to hold consultations in regard to Ukraine’s constantly imposed sanctions, prohibitions, special requirements and procedures against Russian goods, services and people starting from 2014, as well as transit through Ukraine,” Oreshkin said at a meeting of trade ministers of the Asia-Pacific Economic Cooperation (APEC) being held in Vietnam.

Oreshkin noted that some of these measures do not protect the Ukrainian economy but, on the contrary, create additional problems for it.

According to the Minister, there are serious grounds for assuming that Ukraine is taking restrictive measures against Russia in violation of its obligations to the WTO, including additional commitments made during the accession process.

“The number of anti-Russian measures, their nature, those falling under the restrictions show that Ukraine systematically and consciously violates its international obligations, ignoring the rules of international trade, other norms of international law,” the Minister said.

The comprehensive lawsuit that Russia has filed to the WTO regarding the sanctions imposed by Ukraine against Russia concerns not only restrictions on supplies of food and non-food products but also the ban on accreditation of Russian media, Oreshkin said.

“We are talking about bans on importing meat and dairy products, fish, wine and vodka products, equipment for railways, fertilizers, and many other goods from Russia… But also restrictions on operations with the Ukrainian currency, prohibition for accreditation of journalists from Russian news agencies and other media,” Oreshkin said in a meeting of trade ministers of APEC.

According to the Minister, Ukraine’s measures also violate its numerous obligations in regard to the transparency of the procedures for development and introduction of bans and other restrictions in trade. Despite the requirements of the WTO agreements, the organization was not consistently notified of these measures. “Thus, the Russian request covers a total of hundreds of elements of Ukrainian regulations and concerns violations of a number of WTO basic agreements, including the Agreement Establishing the WTO, the General Agreement on Trade in Services, the Agreement on Import Licensing Procedures, the Agreement on Technical Barriers to Trade, and the Agreement on Sanitary and Phytosanitary Measures,” Oreshkin said.

The request for consultations in the WTO is the first procedure in the filing of a claim before the organization. In accordance with WTO procedures, consultations with the Government of Ukraine should be held within two months to find a mutually acceptable solution to the current situation. “If the consultations do not bring the expected result, we have the right to begin the second stage of the dispute – to refer the case to the arbitration panel,” the Minister said.