As Russia-gate gives cover for an Establishment attack on Internet freedom and independent news, traditional defenders of a free press and civil liberties are joining the assault or staying on the sidelines. 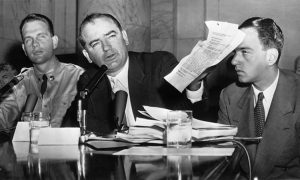 In the past, America has witnessed ‘McCarthyism’ from the Right and even complaints from the Right about ‘McCarthyism of the Left’. But what we are witnessing now amid the Russia-gate frenzy is what might be called ‘Establishment McCarthyism‘ traditional media/political powers demonizing and silencing dissent that questions mainstream narratives.

This extraordinary assault on civil liberties is cloaked in fright-filled stories about “Russian propaganda” and wildly exaggerated tales of the Kremlin’s “hordes of Twitter bots,” but its underlying goal is to enforce Washington’s “groupthinks” by creating a permanent system that shuts down or marginalizes dissident opinions and labels contrary information – no matter how reasonable and well-researched – as “disputed” or “rated false” by mainstream “fact-checking” organizations like PolitiFact.

It doesn’t seem to matter that the paragons of this new structure – such as The New York Times, The Washington Post, CNN and, indeed, PolitiFact – have a checkered record of getting facts straight.

For instance, PolitiFact still rates as “true” Hillary Clinton’s false claim that “all 17 U.S. intelligence agencies” agreed that Russia was behind the release of Democratic emails last year. Even the Times and The Associated Press belatedly ran corrections after President Obama’s intelligence chiefs admitted that the assessment came from what Director of National Intelligence James Clapper called “hand-picked” analysts from only three agencies: CIA, FBI and NSA.

And, the larger truth was that these “hand-picked” analysts were sequestered away from other analysts even from their own agencies and produced “stove-piped intelligence,” i.e., analysis that escapes the back-and-forth that should occur inside the intelligence community.

Even then, what these analysts published last Jan. 6 was an “assessment,” which they specifically warned was “not intended to imply that we have proof that shows something to be a fact.” In other words, they didn’t have any conclusive proof of Russian “hacking.”

Yet, the Times and other leading newspaper routinely treat these findings as flat fact or the unassailable “consensus” of the “intelligence community.” Contrary information, including WikiLeaks’ denials of a Russian role in supplying the emails, and contrary judgments from former senior U.S. intelligence officials are ignored.

The Jan. 6 report also tacked on a seven-page addendum smearing the Russian television network, RT, for such offenses as sponsoring a 2012 debate among U.S. third-party presidential candidates who had been excluded from the Republican-Democratic debates. RT also was slammed for reporting on the Occupy Wall Street protests and the environmental dangers from “fracking.”

How the idea of giving Americans access to divergent political opinions and information about valid issues such as income inequality and environmental dangers constitutes threats to American “democracy” is hard to comprehend.

However, rather than address the Jan. 6 report’s admitted uncertainties about Russian “hacking” and the troubling implications of its attacks on RT, the Times and other U.S. mainstream publications treat the report as some kind of holy scripture that can’t be questioned or challenged.

For instance, on Tuesday, the Times published a front-page story entitled ‘YouTube Gave Russians Outlet Portal Into U.S.’ that essentially cried out for the purging of RT from YouTube. The article began by holding YouTube’s vice president Robert Kynci up to ridicule and opprobrium for his praising “RT for bonding with viewers by providing ‘authentic’ content instead of ‘agendas or propaganda.’”

The article by Daisuke Wakabayashi and Nicholas Confessore swallowed whole the Jan. 6, 2017 report’s conclusion that RT is “the Kremlin’s ‘principal international propaganda outlet’ and a key player in Russia’s information warfare operations around the world.” In other words, the Times portrayed Kynci as essentially a “useful idiot.”

Yet, the article doesn’t actually dissect any RT article that could be labeled false or propagandistic. It simply alludes generally to news items that contained information critical of Hillary Clinton as if any negative reporting on the Democratic presidential contender – no matter how accurate or how similar to stories appearing in the U.S. press – was somehow proof of “information warfare.”

As Daniel Lazare wrote at Consortium News on October 25, “The web version [of the Times article] links to an RT interview with WikiLeaks founder Julian Assange that ran shortly before the 2016 election. The topic is a September 2014 email obtained by Wikileaks in which Clinton acknowledges that ‘the governments of Qatar and Saudi Arabia … are providing clandestine financial and logistic support to ISIL and other radical Sunni groups in the region.’”

In other words, the Times cited a documented and newsworthy RT story as its evidence that RT was a propaganda shop threatening American democracy and deserving ostracism if not removal from YouTube.

Not to say that I share every news judgment of RT – or for that matter The New York Times – but there is a grave issue of press freedom when the Times essentially calls for the shutting down of access to a news organization that may highlight or report on stories that the Times and other mainstream outlets downplay or ignore.

And this was not a stand-alone story. Previously, the Times has run favorable articles about plans to deploy aggressive algorithms to hunt down and then remove or marginalize information that the Times and other mainstream outlets deem false.

Nor is it just the Times. Last Thanksgiving, The Washington Post ran a fawning front-page article about an anonymous group PropOrNot that had created a blacklist of 200 Internet sites, including Consortiumnews.com and other independent news sources, that were deemed guilty of dispensing “Russian propaganda,” which basically amounted to our showing any skepticism toward the State Department’s narratives on the crises in Syria or Ukraine.

So, if any media outlet dares to question the U.S. government’s version of events – once that storyline has been embraced by the big media – the dissidents risk being awarded the media equivalent of a yellow star and having their readership dramatically reduced by getting downgraded on search engines and punished on social media.

Meanwhile, Congress has authorized $160 million to combat alleged Russian “propaganda and disinformation,” a gilded invitation for “scholars” and “experts” to gear up “studies” that will continue to prove what is supposed to be proved – “Russia bad” – with credulous mainstream reporters eagerly gobbling up the latest “evidence” of Russian perfidy.

There is also a more coercive element to what’s going on. RT is facing demands from the Justice Department that it register as a “foreign agent” or face prosecution. Clearly, the point is to chill the journalism done by RT’s American reporters, hosts and staff who now fear being stigmatized as something akin to traitors.

You might wonder: where are the defenders of press freedom and civil liberties? Doesn’t anyone in the mainstream media or national politics recognize the danger to a democracy coming from enforced groupthinks? Is American democracy so fragile that letting Americans hear “another side of the story” must be prevented?

I agree that there is a limited problem with jerks who knowingly make up fake stories or who disseminate crazy conspiracy theories – and no one finds such behavior more offensive than I do. But does no one recall the lies about Iraq’s WMD and other U.S. government falsehoods and deceptions over the years?

Often, it is the few dissenters who alert the American people to the truth, even as the Times, Post, CNN and other big outlets are serving as the real propaganda agents, accepting what the “important people” say and showing little or no professional skepticism.

And, given the risk of thermo-nuclear war with Russia, why aren’t liberals and progressives demanding at least a critical examination of what’s coming from the U.S. intelligence agencies and the mainstream press? The answer seems to be that many liberals and progressives are so blinded by their fury over Donald Trump’s election that they don’t care what lines are crossed to destroy or neutralize him. Plus, for some liberal entities, there’s lots of money to be made.

For instance, the American Civil Liberties Union has made its “resistance” to the Trump administration an important part of its fundraising. So, the ACLU is doing nothing to defend the rights of news organizations and journalists under attack.

When I asked ACLU about the Justice Department’s move against RT and other encroachments on press freedom, I was told by ACLU spokesman Thomas Dresslar: “Thanks for reaching out to us. Unfortunately, I’ve been informed that we do not have anyone able to speak to you about this.”

Meanwhile, the Times and other traditional “defenders of a free press” are now part of the attack machine against a free press. While much of this attitude comes from the big media’s high-profile leadership of the anti-Trump Resistance and anger at any resistors to the Resistance, mainstream news outlets have chafed for years over the Internet undermining their privileged role as the gatekeepers of what Americans get to see and hear.

For a long time, the big media has wanted an excuse to rein in the Internet and break the small news outlets that have challenged the power – and the profitability – of the Times, Post, CNN, etc. Russia-gate and Trump have become the cover for that restoration of mainstream authority.

So, as we have moved into this dangerous New Cold War, we are living in what could be called “Establishment McCarthyism,” a hysterical but methodical strategy for silencing dissent and making sure that future mainstream groupthinks don’t get challenged.