Russia ends visa-free travel with Turkey as of Jan 1, 2016

From Associated Press and Bloomberg, published on Friday, Nov 27 2015

ANKARA, TURKEY — Russian Foreign Minister Sergey Lavrov says Moscow has decided to suspend visa-free travel with Turkey. He said visa-free travel will be suspended starting from January 1, explaining that Turkey has been reluctant to share information with Moscow about it citizens accused of involvement in terrorist activities. 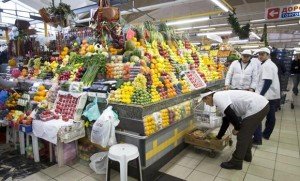 Food market in Moscow. Food products from Turkey among those being restricted by Russia following Nov 24 shootdown of Russian warplane (Alexander Zemlianichenko, AP)

The move comes amid a bitter spat between Moscow and Ankara over a Russian warplane downed by Turkish F-16s on Tuesday. Moscow has lashed out at Ankara, accusing it of buying oil from ISIS and supporting terrorist groups there.

Lavrov also said he supports France’s proposal to shut down the Turkish-Syrian border as a way to fight Islamic State fighters in Syria.

Turkish President Recep Tayyip Erdogan says he warned Russian President Vladimir Putin during their meeting earlier this month at a G-20 summit in Turkey of the risks of Russian planes intruding into Turkey’s airspace.

He said Friday that Putin urged Turkey to accept the Russian planes “as guests.” Erdogan said he responded: “There cannot be uninvited guests. The region is sensitive.” He was addressing thousands of supporters on Friday.

Erdogan also accuses Russia of backing Syrian President Bashar Assad’s “terrorist state” which he says is responsible for the deaths of 380,000 people.

He again challenged Russia to prove allegations that Turkey was buying oil from the Islamic State group, and claimed that ISIS sells oil to Assad and that Russian companies were involved.

Russia’s effective ban on tourist travel to Turkey will reverberate far beyond a Kremlin-themed hotel on the Antalya coast. Turkey is the most popular foreign destination for Russians, with 3.3 million making the trip in the first nine months of this year. They make up more than 10 per cent of the tourists in Turkey, the second-highest number after Germany.

The impact goes beyond the official tourism numbers. The amount of Turkey’s foreign-exchange revenue associated with Russian tourists and the unregistered trade they facilitate is higher than $6 billion U.S. per year, or just over 0.8 per cent of the nation’s gross domestic product.

Add Turkish exports through official channels to those figures and Russia-related income rises to 1.4 per cent of Turkish GDP, said Erkin Isik, a strategist at Turk Ekonomi Bankasi AS in Istanbul, by email on Thursday.