Russia’s Defense Ministry has denied claims it carried out attacks on a civilian area in Aleppo’s Qaterji district. The claims were made by Western media after video and pictures of a wounded five-year-old boy from the area emerged online. 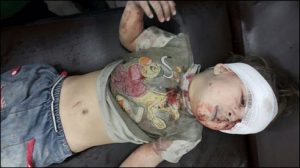 “The critical plight that the children from eastern Aleppo districts are in – unwillingly taken hostage by terrorists – is surely a tragedy,” said the official representative of the Russian Defense Ministry, Igor Konashenkov.

He criticized certain Western media for the “cynical use of this tragedy in anti-Russian propaganda material,” calling it a “moral crime.”

“We have repeatedly stressed that the Russian Air Force planes operating in Syria never work on targets within residential areas,” Konashenkov said.

“It is all the more relevant regarding al-Qaterji, mentioned by the Western media, as it is adjacent to the exit corridors for locals which were opened in the framework of the Russian humanitarian mission,” he added, as quoted in a Defense Ministry press release. 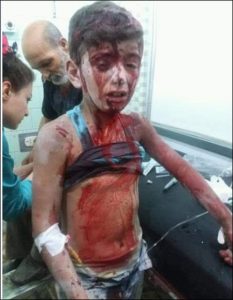 “It is done to disrupt any attempts to receive medical and other kinds of aid for eastern Aleppo residents, who are basically terrorist hostages now.

“The nature of the debris shown by Western broadcasters during the operation to save [the wounded boy, Omran Daqneesh] demonstrates that there are intact windows in a building nearby, and this in turn shows that the strike, if it happened, was carried out not using aircraft ammunition but a mine or a gas cylinder, which are commonly used by terrorists,” Konashenkov also said.

The Russian statement comes a day after images of an ash-covered boy who survived an airstrike in Syria spread online. The video showed the boy, named as Omran Daqneesh, being rescued from a ruined building in Aleppo.

Around two weeks ago, Russia and Syria began a large-scale operation to open special exit corridors in Aleppo for civilians and those ready to lay down their arms. On August 18, the Russian Defense Ministry backed a proposal from the UN Syria envoy to carry out 48-hour weekly ceasefires to deliver humanitarian relief to Aleppo residents. The first truce could be held next week. [Report below.]

*  Here’s what Russia proposed to solve the humanitarian crisis in Aleppo, by  Alexander Mercouris, The Duran, Aug 19, 2016

As rebel hopes in Aleppo fade, Western media highlights stories of humanitarian disaster in the city and UN presses for a 48 hour ceasefire. The Russians respond by making practical suggestions to relieve the suffering in both government and rebel controlled areas of Aleppo.

The Russian Ministry of Defense has backed a proposal from the UN Syria envoy to organize 48-hour weekly ceasefires to supply humanitarian relief to Aleppo citizens. The first truce could be organized as early as next week.

The proposal – which was originally voiced last week by the UN Syria envoy Staffan de Mistura, who called for 48-hour ceasefires instead of the three hours proposed by the Russian side – has been welcomed in Moscow.

As a means to broaden the scale of the humanitarian mission in Aleppo, the Russian Defense Ministry is ready to back the UN proposal to introduce the 48-hour pauses, which would allow the city’s population to be supplied with food and medication, and for vital infrastructure damaged by terrorist shelling to be restored, the ministry’s spokesman, Major General Igor Konashenkov, said.

A test-run of the 48-hour truces could be organized next week to see if relief can reach civilians safely.

“A more precise date and time will be determined after receiving information about the readiness of the convoys from the UN representatives and receiving confirmation of the security guarantees of their safe travel from our American partners,” Konashenkov said.

The Ministry of Defense added that Moscow is ready to discuss the issues concerning the safety of UN humanitarian convoys with Damascus and expects the same security guarantees from Washington regarding the so-called “moderate opposition” and other units.

The UN has welcomed Russia’s support of the decision to put hostilities in Aleppo on 48-hour pauses weekly to make sure humanitarian convoys reach their destinations, Farhan Haq, deputy spokesman for the secretary-general, said on Thursday.

The special envoy for Syria has been informed by the Russian Ministry of Defense, Haq said, adding that the UN is ready to begin the delivery of aid and is looking forward to receiving further details on introducing humanitarian pauses in Aleppo.

“The special envoy welcomes the Russian Federation statement, and the United Nations humanitarian team is now set to mobilize itself to respond to this challenge,” de Mistura said in a statement, as cited by Reuters.

“Our plan is to collectively work out the operational details, and be ready for delivery as soon as possible,” he also noted.

Russia’s intention to start a trial 48-hour humanitarian pause as early as next week has been welcomed by German Foreign Minister Frank-Walter Steinmeier as well.

On July 28, Russia and Syria launched a large-scale humanitarian operation for Aleppo residents, opening three corridors for civilians and those ready to lay down arms to exit the city. Four more corridors were opened several days later.

On Tuesday August 16, Russian long-range Tu-22M3 bombers and Su-34 tactical bombers delivered airstrikes in Syria in Aleppo, Deir-ez-Zor and Idlib provinces against installations of Islamic State terrorists (IS, formerly ISIS/ISIL), taking off from Hamadan Airbase in western Iran. The operation was covered by Su-30SM and Su-35S jet fighters which took off from Russia’s Khmeimim Airbase in Syria.

In the period from August 7–10 “nearly 1,000 militants were killed and over 2,000 injured,” the Russian General Staff told journalists.

Some “50 tons of food, basic necessities, medicine as well as 93 tons of water” were delivered to Aleppo following the establishment of “safe routes” since the end of July, according to Lieutenant General Sergey Rudskoy, chief of the main operations department of the Russian General Staff.