MOSCOW– Russia is awaiting explanations from Poland in connection with the pulling-down of a Monument of Gratitude to the Red Army in the southeastern Polish town of Mielec, the Russian Foreign Ministry said in a commentary on Monday. 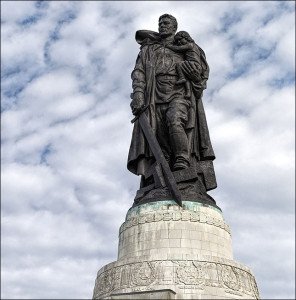 Liberator Soldier Monument in Berlin, copy of which stood in Mielec, Poland until Nov 2015 dismantlement

“Such actions are taking on a mass character in Poland,” the ministry said. “They insult in a most cynical way the memory of Soviet soldiers who lost their lives while liberating Europe from fascism.”

“It is saddening that the Polish authorities do not make any steps to stop the vandals,” the ministry said.

“We demand that Poland’s new leadership stop the rampage, which runs counter to all the imaginable notions about modern civilization, put an end to the destruction of Soviet monuments, guarantee their safety, restore the damage already inflicted, and punish the guilty individuals. Also, we await explanations from Warsaw.”

“By disassembling the monument [in Mielec], the Polish side has once again violated the main provisions of bilateral documents of the May 22, 1992 Russian-Polish agreement on good-neighborly cooperation; the August 25, 1993 agreement on cooperation in culture, science and education; and the February 22, 1994 intergovernmental agreement on sites commemorating the victims of wars and repressions,” the commentary said.

Monument to Soviet soldiers to be relocated to museum

The monument in Mielec will be relocated to the Museum of Polish People’s Republic in the town of Ruda Slaska, said Zbigniew Tymula, the chairman of the Mielec powiat (district)on Monday.

“We worked on this and took a decision at the level of the district council and everything has been coordinated from the point of view of law,” Tymula said adding the monument was dismantled at the request of local residents who had been gathering signatures for this over a period of several years.

The figure of a soldier was taken off the pedestal “in the absence of reporters, without cameras, in a dignified manner and in full compliance with law,” he said.

The Monument of Gratitude to the Red Army in Mielec, south-eastern Poland, close to the border with Ukraine, was a complete copy of the Liberator Soldier monument in Berlin’s Treptower Park. The soldier is shown standing with a child seated on one arm and with a sword in the hand. The monument was disassembled last week.