Russia foils infiltration of saboteurs into Crimea, says Ukraine is turning to terrorism

Kiev has turned to the “practice of terrorism” instead of trying to peacefully resolve Ukraine’s crisis, Russian President Vladimir Putin said in commenting on an FSB report that it had foiled terrorist attacks in Crimea plotted by Ukrainian intelligence. 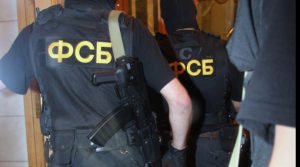 Ukraine is “playing a dangerous game,” the Russian leader said when talking to reporters on Wednesday, while calling Kiev’s actions “stupid and criminal.”

Moscow cannot turn a blind eye to the deaths of its servicemen who were killed during special operations to prevent terrorist attacks in Crimea, Putin said.

Given that the Main Directorate of Intelligence of the Ministry of Defense of Ukraine (HUR MOU) was allegedly behind the thwarted terrorist attacks in Crimea, it is “pointless” to meet with Ukraine’s current authorities to seek a solution to the country’s crisis, Putin said.

The leaders of Russia, Ukraine, France, and Germany were to meet in the so-called “Normandy format” to discuss the peace process in Ukraine on the sidelines of the upcoming G20 in China. However, Kiev has demonstrated that it’s not interested in peaceful negotiations, the Russian president told reporters, adding that he would like to address the matter with Moscow’s American and European partners as well.

“I think it’s obvious that Kiev’s current authorities are not seeking for ways to solve problems through negotiations, but have turned to terrorism,” Putin said, adding that this new development is rather alarming.

Russia’s Federal Security Service (FSB) announced on Wednesday it had discovered a group of infiltrators in Crimea close to the Ukrainian border. Explosive devices and ammunition used by the Ukrainian Army’s special forces were discovered at the scene, while more attempts by Ukrainian raiding and terrorist groups to break through had been prevented by Russian forces this week, the FSB said.

Kiev refuted the FSB report of a foiled terrorist plot, and instead accused Moscow of provocation. Blaming the “escalation” on Russia, Ukraine’s permanent representative to the Council of Europe, Dmytro Kuleba, said on Twitter that Moscow “is testing the West’s reaction.”

Putin draws West’s attention to Ukraine switching to terror, says a new round of talks on ceasefire in Ukraine is ‘pointless’ under such conditions

MOSCOW – Russian President Vladimir Putin said on Wednesday he had drawn the attention of the United States and Europe to Ukraine, which was switching to terror. “I would also like to turn to our American and European partners,” he said at a press conference in Moscow following talks with Armenian President Serzh Sargsyan.

“I believe it is already obvious for all that today’s Kiev authorities are not seeking the methods of solving problems through negotiations but are switching to terror. This is a very alarming thing,” Putin said.

The Russian president Putin has described as alarming reports of prevented operations by Ukrainian saboteurs in Crimea. “This news is very alarming, indeed. Our special services have prevented a reconnaissance and sabotage group of the Ukrainian Defense Ministry from getting into Crimea,” Putin said.

The Russian President described as silly and criminal the Ukrainian special services’ attempt at an act of sabotage in Crimea. The real purpose was to distract attention from Ukraine’s internal problems, he added.

“This action, the one we’ve just seen in Crimea, was silly and criminal. It was silly because it is impossible to influence the people of Crimea in this way, and it was criminal because it caused loss of human life,” Putin said.

Putin hopes the U.S. will exert influence on the Ukrainian government if it is really interested in the solution of the Ukrainian problem. “The main thing is that everyone supporting the incumbent authorities in Kiev should decide for themselves in the final run what they actually want: continued provocations on the part of their clients or somehow a real peace settlement,” Putin said.

“If they really want this, and I strongly hope they do, they should take some practical steps at last so as to put appropriate pressure on the Kiev government,” he said.

Russia to take additional steps to ensure security in Crimea

“I want to say that those will be serious additional measures and more than that,” Putin said.

The Russian president said he considers a meeting in the ‘Normandy’ format pointless against the backdrop of Ukrainian saboteurs’ attempt to organize a terrorist atttack in Crimea. “Of course, in these circumstances, holding a meeting in the Normandy format, the more so in China, is pointless.

Kiev earlier suggested holding a meeting in the Normandy format (which brings together Russian, Ukrainian, French and German leaders) on the sidelines of the G20 meeting to be held in China on September 4-5. Moscow agreed with this proposal.

Putin also noted that Russia considers the recent assassination attempt of the head of the Lugansk People’s Republic an act of terrorism in the wake of the latest developments in Crimea.

Russia’s Federal Security Service (FSB) has prevented terrorist attacks in Crimea that were planned by the Ukrainian Defense Ministry’s intelligence agency, the FSB has announced.

The Main Directorate of Intelligence of the Ministry of Defense of Ukraine (HUR MOU) was preparing to target the Russian peninsula’s critical infrastructure, the FSB explained on Wednesday.

A group of infiltrators was discovered near the town of Armyansk in northern Crimea near the Ukrainian border in a special FSB operation over the weekend, the agency said, adding that fire was exchanged as the terrorists were being apprehended. One FSB officer was killed.

Twenty home-made explosive devices equivalent to more than 40 kilos of TNT as well as ammunition, shells, and other weapons used by the Ukrainian Army’s special forces were discovered at the scene.

Two more attempts by Ukrainian raiding and terrorist groups to breakthrough were prevented by Russian forces on Monday. Kiev’s armored vehicles provided covering fire for the groups from the Ukrainian side, the FSB said, adding that one Russian serviceman had been killed in that operation.

A network of agents from Ukraine’s chief intelligence directorate has been uncovered in Crimea, according to the FSB, which said it included both Ukrainian and Russian citizens that provided assistance in preparing terrorist acts. Those suspects employed by Ukrainian intelligence are now giving their confessions, the FSB reported, adding that the captured group includes one of the organizers. A criminal case has been opened and additional covert and investigative activities are being conducted in the region.

The thwarted acts of sabotage and terrorism were aimed at destabilizing the social and political situation on the peninsula ahead of both local and federal elections, the FSB said in its statement. Ukraine’s General Staff has said the reports of groups raiding Crimea are provocations.

A Ukrainian defense intelligence spokesman refuted the FSB report, telling Reuters that the information was “fake.”

Meanwhile, security in the region has been tightened due to the discovery, the FSB announced, saying that additional security arrangements have been made near major infrastructure objects, in crowded places, and on the Russian-Ukrainian border.

About two million Crimean residents were left partially or completely without power, prompting the Crimean Republic’s authorities to pass an address on to the United Nations, asking it to recognize Ukraine’s “energy blockade” of the peninsula as violation of basic Human Rights and genocide.

Russia accuses Ukraine of trying to get saboteurs into Crimea

MOSCOW – Russia says it has thwarted two armed Ukrainian attempts to get saboteurs into Crimea and has dismantled a spy network inside the annexed peninsula, accusations Ukraine dismissed on Wednesday as “fake information”.

If true, the events – which the FSB said involved at least two armed clashes on the border between Crimea and Ukraine – would be the most serious escalation on the contested peninsula since Moscow annexed it [sic] from Ukraine in 2014.

U.S. and European Union sanctions to punish Russia for the land grab [sic] remain in place. Moscow has made clear it has no intention of handing the peninsula back to Ukraine and has started to reinforce Crimea militarily.

The FSB said it believed Ukrainian special forces had been planning attacks, targeting critical infrastructure. An FSB employee and a Russian soldier were killed in the clashes on the weekend, it said.

“The aim of this subversive activity and terrorist acts was to destabilize the socio-political situation in the region ahead of preparations and the holding of elections,” the FSB said, referring to Russia-wide parliamentary elections next month.

A spokesman for Ukrainian military intelligence denied the accusations. “This is fake information,” the spokesman said.

The Ukrainian Defence Ministry said in a statement the FSB’s assertions looked like an attempt to justify “acts of aggression” and the redeployment of military units to Crimea. “Representatives of the Russian special services are trying to divert the attention of the local population and the international community from criminal acts to transform the peninsula into an isolated military base,” it said.

The FSB said it had tackled one group of Ukrainian saboteurs in an operation that spanned late Saturday and early Sunday, smashing what it called a Ukrainian spy network. Ukraine and Russian nationals were arrested and an arms cache, including 20 homemade explosive devices, ammunition, mines, grenades and specialized weapons commonly used by Ukrainian special forces, had been recovered, it said.

The FSB said the situation escalated further late on Sunday and in the early hours of Monday. “Ukrainian special forces units tried to break through two more times with groups of saboteur-terrorists but were thwarted by FSB units and other forces,” it said.

“The attempts to break through were accompanied by massive covering fire from the neighboring state and from Ukrainian armored vehicles.”

Security has been beefed up in areas popular with tourists, at key infrastructure and along the Crimea border, the FSB said.

(Additional reporting by Maria Tsvetkova in Moscow and Pavel Polityuk in Kiev; Editing by Janet Lawrence)