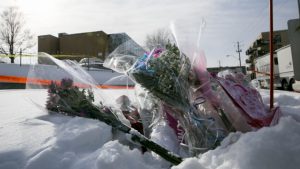 The killer then drove away from the scene and phoned police to come and arrest him. He is in detention facing facing six charges of first degree murder and five charges of attempted murder. [Report on CBC News here.]

Police and government officials, including Prime Minister Justin Trudeau, are provocatively labeling the killer a “terrorist”. But police say he operated on his own and extensive media reports detail the killer’s anti-Muslim, anti-woman and racist views.

From CBC News, Jan 30, 2017: ‘The suspect was “unfortunately known to several activists in Quebec City for his pro-Le Pen and anti-feminist positions at Laval University and on social networks,” wrote the Bienvenue aux réfugiés/es – Ville de Québec Facebook group…’

In other words, the killer was a right-wing racist, not a terrorist. Media and government choose to inaccurately describe him because that fits with their national security and foreign policy  agendas. It is a pattern in Canada to describe as “terrorists” violent, right-wing gun criminals, including those who may be suffering serious mental disorders.

The Centre Culturel Islamique de Québec located in Quebec City, where six people were killed by an armed racist on Jan 29, 2017

Anti-Muslim acts have been on the rise in Canada. Those with racist and anti-Muslim views are further emboldened by the travel bans and hate speech directed at Muslim people by U.S. President Donald Trump and his administration.

The province of Quebec and all of Canada remains haunted by the École Polytechnique massacre of December 1989. Twenty-five year old Marc Lépine, entered the École Polytechnique (engineering school) at the Université de Montreal carrying heavy weapons. He separated men from women and then proceeded to kill 14 women students and injure 10 other women and ten men. He then killed himself.

Present-day Canada is in crisis over a host of social illnesses, including suicides of Afghanistan military veterans (at least 70, according to the Globe and Mail), youth suicides and other social calamities among the First Nations population, and an injection drug overdose epidemic that reported 914 deaths in 2016 in the province of British Columbia alone. The province counts 13 per cent of Canada’s population.