Right Sector vs. the Junta: The events in Mukachevo 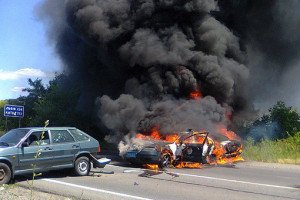 In Mukachevo, there is a skirmish between police of the Junta and the Pravy Sektor. Right away there were comments ranging from the view that this is the beginning of the end, on one the one hand, to, on the other hand, that nothing bad will happen. Poroshenko will crush the whole thing or make a compromise.

Many of us had hoped that the explosion will happen earlier, but the United States managed to temporarily stabilize the situation. Relatively stable, because the Nazi militias were not disbanded and the government did not comply fully, but internal war has not begun.

However, the explosion was and remains inevitable. Its inevitability dictated by limited resources and the unwillingness of the junta, and the inability of the US to pump enough resources to Ukraine to ensure that there is enough for all groups, while also maintaining the functions of the state.

This, however, does not mean that the conflict will necessarily result in an all-Ukrainian confrontation. It can be a match set to a barrel of gunpowder, or may not be. Then we have to wait for what comes.

What we can deduce: The conflict in Mukachevo is for us, of course, positive. It can be resolved in three main ways:

Either option weakens Kiev authorities and destabilization increases. In different ways, the police and the Pravy Sektor both represent armed support for the junta. The police are used to crush the resistance using the formalities of law. The Pravy Sektor resorted to extrajudicial killings.

When two armed structures of one system start shooting at each other, it can mean only one thing – the system is in deep crisis and its different factions can no longer negotiate peacefully. That is, one way or another, but the war within the system is imminent. Though perhaps the final explosion, as I wrote above, will be able to be postponed temporarily.

If Poroshenko suppress the Pravy Sektor – he will be deprived of the support of the power from the most motivated of the Nazis, including the part of the volunteer movement, which feeds the army. Many volunteers are sympathetic to the Pravy Sektor. Similarly, there are sympathizers among the officers, including the senior command level. That is, the move will weaken government support.

If the Pravy Sektor sweeps away Poroshenko, that’s even better. In Ukraine, there will be established a radical nationalist dictatorship, to which the Americans, nor especially Europe, cannot turn a blind eye. The international legitimacy of the regime will fall to zero, and internal resistance to it within the country will increase. In addition, to take control of all of Ukraine, the Nazis (without the support of political status) cannot.

Can they somehow compromise? This is bad, of course, but it does not remove the contradictions. That is, the causes of the conflict remain and the next conflict will only be a matter of ‘when’ and not ‘if’.  In addition, Poroshenko will communicate that in his country one can engage in a shootout with the police and there will be no consequences. With its hands laden with weapons and hatred, the Pravy Sektor swept the Maidan circles into power. Finally, the Pravy Sektor will still consider themselves humiliated and insulted, and the experience of the use of weapons with impunity against the authorities will embolden them for a push for similar “exploits”.

The bottom line is we have: