A member of the “Vikings” neo-Nazi group in the Right Sector during the “Euromaidan” recently repeated on a Ukrainska pravda forum his earlier public admission that he killed two policemen on February 18, 2014 and that his associate, who was deputy leader of the “Vikings,” also killed two policemen on the same day from his Nagant revolver. They both served in the Ukrainian Voluntary Corps of the Right Sector during the war in Donbas.

These confessions and other evidence of the involvement of the Right Sector in the violent overthrow of the Ukrainian government and in the Maidan massacre continue to be ignored by the government in Ukraine and the Ukrainian and Western media. 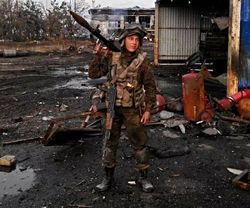 In contrast, numerous reports in the Ukrainian media hailed the ex deputy leader of the “Vikings” as a heroic “cyborg” before and after he was killed during fighting in the Donetsk airport.

In 2015, the city council of Sumy awarded him posthumously a honorary title.

A reader of Ivan Katchanovski’s Facebook page suggests that the researcher should  publish the findings above as well as other findings in a publication such as Open Democracy. Katchanovski replies:

I think it is unlikely that Open Democracy or other such Western media outlet would now publish such an article because of its content. Open Democracy accepted my article on the involvement of the far right in the Maidan massacre but then did not publish it. Other Western media outlets also refused to publish it. Several correspondents for leading Western media are familiar with my Facebook posts and related research findings on the far right in Ukraine, but they also would not report now about these confessions for similar reasons.

Another reader writes: “Which Western media outlets refused to publish your article? Just try it again. There is no pro-Ukrainian media conspiracy in the West.” Katchanovski replies:

They include Guardian, Atlantic, Foreign Policy, Washington Post, Salon, and Open Democracy, which published numerous articles concerning Ukraine, often by non-experts and based on factually incorrect information. I study the politics of the Western media coverage of Ukraine and other post-communist countries. The current coverage of Ukraine fits the pattern of media misrepresentation of these countries. Specifically, before the “Euromaidan”, Ukraine was misrepresented by the Western media as Nazi-ridden and Ukrainians as Nazi collaborators. Now, the media ignores or minimizes the role of neo-Nazis and other far right organizations in the violent overthrow of the government and the war in Donbas for the same political reasons. My website contains this and other such studies: The politics of television coverage of post-communist countries (February 2012).