Who is in the right in the Canada-Venezuela diplomatic dispute? 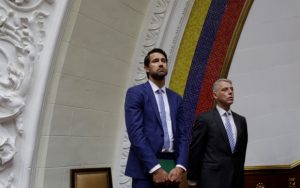 Lying is so common in diplomacy that it can be hard to tell heads from tails in international disputes. In the recent tussle between Caracas and Ottawa, for instance, Venezuela says it is trying to protect itself from foreign ‘interference’ while Canada claims it is promoting ‘democracy and human rights’. Given the ever-present possibility of a complete disregard for truth on both sides, which government might be more credible in this instance?

Let us consider the background.

In one project, the Canadian embassy distributed $125,212 through the Canadian Funding to Local Initiatives program, which “provided flexible, modest support for projects with high visibility and impact on human rights and the rule of law, including: enabling Venezuelan citizens to anonymously register and denounce corruption abuses by government officials and police through a mobile phone application in 2014-15.”

In August outgoing Canadian ambassador Ben Rowswell, a specialist in social media and political transition, told the Ottawa Citizen: “We established quite a significant internet presence inside Venezuela, so that we could then engage tens of thousands of Venezuelan citizens in a conversation on human rights. We became one of the most vocal embassies in speaking out on human rights issues and encouraging Venezuelans to speak out.”

(Can you imagine the hue and cry if a Venezuelan ambassador said something similar about Canada?)

Rowswell added that Canada would continue to support the domestic opposition after his departure from Caracas since “Freeland has Venezuela way at the top of her priority list.”

So, obviously it’s hard to argue with Rodriguez’ claim that Canada has been “interfering in the internal affairs of Venezuela.”

But, what to make of Freeland’s statement when Ottawa declared Venezuela’s top diplomat persona non grata in response, stating that “Canadians will not stand by as the government of Venezuela robs its people of their fundamental democratic and human rights”?

A series of decisions Freeland’s government has pursued over the past two weeks make it hard to take seriously Canada’s commitment to democracy and human rights:

Canada signed a defence cooperation arrangement with the United Arab Emirates. According to Radio Canada International, the accord with the monarchy “will make it easier for the Canadian defence industry to access one of the world’s most lucrative arms markets and bolster military ties between the two countries.”

Canada sided with the US, Israel and some tiny Pacific island states in opposing a UN resolution supporting Palestinian statehood backed by 176 nations.

Immigration Minister Ahmed Hussen promoted Canadian energy and mining interests during a meeting with Kenyan President Uhuru Kenyatta, who is seeking international legitimacy after winning a controversial election (re-run) boycotted by the opposition.

The Liberals added Ukraine to Canada’s Automatic Firearms Country Control List, which allows Canadian companies to export weapons to that country with little restriction. President Petro Poroshenko, who has a 2% popular approval rating, needs to make gains in the Ukraine’s civil war to shore up his legitimacy.

Just before expelling Venezuela’s chargé d’affaires Ottawa officially endorsed an electoral farce in Honduras. Following Washington, Global Affairs tweeted that Canada “acknowledges confirmation of Juan Orlando Hernandez as President of #Honduras.” But, Hernandez defied the country’s constitution in seeking a second term and since the election fraud on November 26 his forces have killed more than 30 pro-democracy demonstrators.

Author of Ottawa and Empire: Canada and the Military Coup in Honduras, Tyler Shipley responded:

Wow, Canada sinks to new lows with this. The entire world knows that the Honduran dictatorship has stolen an election, even the Organization of American States (an organization which skews right) has demanded that new elections be held because of the level of sketchiness here. And — as it has for over eight years — Canada is at the forefront of protecting and legitimizing this regime built on fraud and violence. Even after all my years of research on this, I’m stunned that Freeland would go this far; I expected Canada to stay quiet until Juan Orlando Hernandez had fully consolidated his power. Instead Canada is doing the heavy lifting of that consolidation.

During the past two weeks Canadian decision makers have repeatedly undermined or ignored democracy and human rights.

While Caracas’ rationale for expelling Canadian diplomats appears credible, the same cannot be said for Ottawa’s move. In the tit-for-tat between Canada and Venezuela Canadians would do better to trust Caracas.

*  Petition to the Canadian government against its sanctions against Venezuela

*  The Canadian government’s official review of its sanctions practices