Responding to Bernie’s promotion of the New Cold War 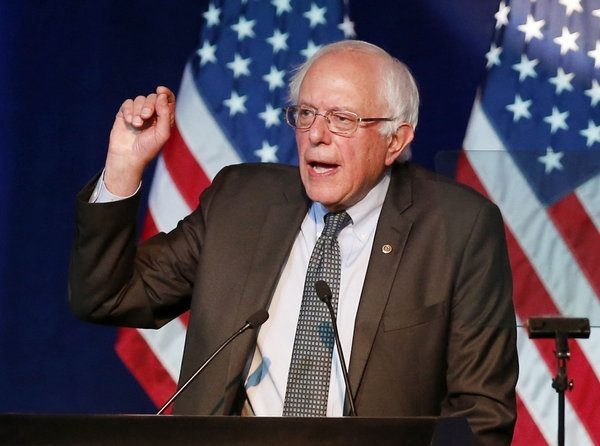 Responding to Bernie’s Promotion of the New Cold War

In this op-ed, Originally published in Consortium News, Caitlin Johnstone responds to Bernie Sanders’ promotion of unproven allegations of Russian meddling in the 2016 election.

In an otherwise fine video response to Tuesday night’s vapid, flag-waving State of the Union address, Bernie Sanders once again promoted the neocon think tank-generated and unproven claim that Russia interfered in America’s 2016 elections via ‘cyberwarfare,’ and repeated the completely baseless insinuation that they colluded with Trump to do so.

“How can he not talk about the reality that Russia, through cyberwarfare, interfered in our election in 2016, is interfering in democratic elections all over the world, and according to his own CIA director will likely interfere in the 2018 midterm elections that we will be holding?” asked the Vermont Senator. “How do you not talk about that unless you have a very special relationship with Mr. Putin?”

This is not an exception to the rule for Sanders, but one more addition to an already consistent and deliberate pattern. In February of last year Sanders delivered a widely viewed video message to his massive online audience solely geared at promoting the Russiagate narrative. At the end of March, he did it again.

This is a big deal. This is not some petty quibble with Sanders’ policies like disagreeing with the specifics of his stance on free trade or fracking. This is not some minor detail which can be dismissed with accusations of purism and impracticality and “Hey, no politician is perfect.” This is the single most pressing issue of our time, and Bernie Sanders is currently, actively marching our world in the exact opposite direction of where it needs to be heading. There is no threat to our species more imminent and dangerous than the threat of annihilation in a nuclear holocaust, and Sanders is helping to manufacture consent for escalations which make that possibility more and more likely. This is a huge problem, and we need to talk about it right now.

I keep getting shushed and dismissed by American progressives whenever I try to bring this up, and that pushback is getting a lot more heated now that Sanders is preparing for the possibility of a 2020 presidential run. As an aggressive promoter of Bernie-or-Bust in the Democratic primary contests, I must say that some of the “DO YOU WANT TRUMP TO WIN??” responses I’ve been getting have been giving me flashbacks, and they aren’t coming from the direction I’m used to.

I sit in a weird space on the political left with regard to Senator Sanders because I have never been one of the nasty, vituperative lefties who constantly shit on Bernie and call him a ‘sheepdog’ or anything like that, but I also haven’t been able to look past his dangerous capitulations to the establishment, so I tend to catch flak from both sides of the debate. I recognize how pervasively toxic the US political climate is and how sane Sanders is in comparison, but at the same time his relentless promotion of a blatant psyop designed to manipulate the public into consenting to geopolitical agendas which have been in place since long before Russiagate is a very big problem that needs to be addressed.

It’s like if you found the perfect boyfriend with a great personality, a rockin’ bod, and an amazing lifestyle… who also happens to murder a prostitute once in a while. All the other truthful and undeniable things Sanders said in his State of the Union response were eclipsed by his promotion of an extremely dangerous agenda like a tiny piece of cat poo on an expensive French cuisine. It’s absolutely unforgivable, and it should be loudly and aggressively resisted by every clear-eyed rebel on earth.

I’m not even saying I’ll oppose Bernie’s presidential run if it comes down to that in 2020. If that’s the direction the American people want to take this thing as part of the awkward two-steps-forward, one-step-back shuffling movement that any shove toward freedom will necessarily look like, I don’t imagine that I will try and stop them. As horrible as Sanders’ foreign policy is I understand that Americans are in an abusive relationship with oligarchy, and if they genuinely feel he’s their best shot at sane domestic policy and a real healthcare system I don’t at this time think it’s my place as an Australian to tell them not to go that route to escape the abuse.

I can however promise that I will never, ever stop aggressively fighting the Russiagate establishment propaganda that Sanders has been consistently promoting. The further into cold war escalations we get, the more likely it is that a nuclear weapon could be discharged in the chaos and confusion. There are too many small moving parts to be able to predict and control how these escalations will unfold, which is why we came within a hair’s breadth of total annihilation on more than one occasion in the last Cold War.

Caitlin Johnstone is a rogue journalist, poet, and utopia prepper who publishes regularly at Medium. Follow her work on Facebook, Twitter, or her website. She has a podcast and a new book Woke: A Field Guide for Utopia Preppers.