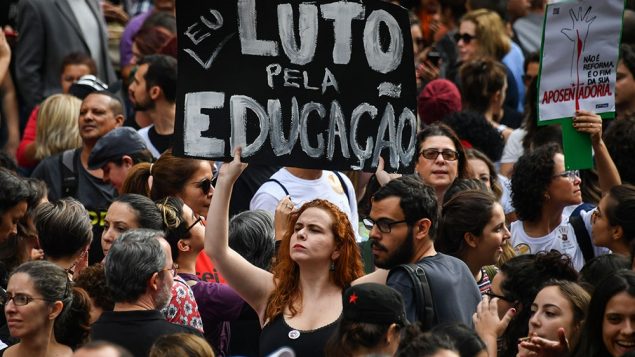 After less than five months in office, Brazil’s far-right president, Jair Bolsonaro, is already facing large resistance to his ultra neo-liberal agenda – and it is teachers and students that are leading the way.

More than one million people took to the streets of Brazil on 15 May 2019 in nationwide strikes opposing the government’s massive attacks on education. Brazil’s far right President Jair Bolsonaro has been in office for less than five months and is already facing large resistance to his ultra neo-liberal agenda – and it is teachers and students that are leading the way.

According to the organisers, a quarter of a million people protested in Sao Paulo and over 200,000 in Rio de Janeiro. Other large demonstrations took place across the country with more than 50,000 educators and students protesting in Brasilia, at the same time as 20,000 people in Curitiba, and 50,000 in Salvador. The protests in defence of education took place in over 100 cities across Brazil.

The National Confederation of Workers in Education described the day of education strikes as a ‘warm up’ for further mobilisations against this and other aspects of Bolsonaro’s austerity offensive that threatens to impoverish the Brazilian people and undermine Brazil’s national, economic and social development.

The next big anti-austerity mobilisation is planned for 14 June 2019, with workers preparing for a general strike against Bolsonaro’s proposed attack on pensions, which is currently being debated in Congress.

Bolsonaro’s project is to dismantle public higher education by starving universities of state funding as a first step before opening the door for the full privatisation of the education sector.

Last week the Ministry of Education announced that it is cutting the funding for all public universities and federal institutes by 30%. There are plans to stop funding the fields of sociology and philosophy altogether – Bolsonaro considers these fields to be “communist.”  The scholarships for 3,000 masters’ degrees and PhDs have already been cancelled.

Following the announcement that Bolsonaro’s government will cut public education, there was a rise in the stock market shares of Kroton-Anhaguera, the world’s largest private company in the field of education. Brasil de Fato has drawn attention to the fact that the sister of Brazil’s Minister of the Economy, Elizabeth Guedes, is the Vice-President of the National Association of Private Universities which represents a number of private educational companies that stand to benefit from the privatisation of Brazil’s public education sector. The website also reports that the Minister of the Economy himself, Paulo Guedes, has investments in the private and distance educational sector.

The privatisation of education threatens to diminish Brazil’s capacity to produce scientific knowledge – which is essential for Brazil’s development. According to the ‘Research in Brazil’ report published in January 2018 the production of scientific knowledge in Brazil is exclusively dependent on public universities.

Bolsonaro’s attack on education corresponds with the Brazilian government’s overall approach of diminishing the role of the state in the economy and undermining the skills, knowledge and technological development of the country. Bolsonaro’s government is aggressively pursuing a privatisation agenda, starting with a programme of selling-off or liquidating about 100 state-owned companies during 2019 alone.

Bolsonaro’s attack on learning and education is an attack on Brazil’s future. Other decisions of the Bolsonaro government also have the character of undermining Brazil’s capacity for development. For example, Brazil’s only large, high-tech, profitable company, Embraer, is being sold off to US corporation Boeing. At the same time Bolsonaro’s government has frozen 42% of the budget for the country’s Science and Communications Ministry.

The fight to defend education in Brazil and stop Bolsonaro’s brutal attack is underway. It’s a fight to defend educational opportunities for future generations of Brazilians to learn and reach their full potential. It’s also a fight to defend Brazil’s capacity to contribute valuable ideas, knowledge and scientific discoveries to the world as well as to develop its economy. In the words of the President of the National Confederation of Education Workers, Heleno Araujo: “without investment in education there in no development.”