Reporting from Donetsk: Children of war 2.0

By Yulia Malkina, reporting from Donetsk for Liva.com, published on Liva.com, Dec 27, 2014

DONETSK, Dec. 23, 2014–They say that shells never strike in the same place twice. However, it is not true.

Petrovsky district is a suburb of Donetsk of coal miners and their families. It is one of the districts of the city most damaged by the artillery bombardments of the Ukrainian army during the past months. I’m looking around, trying to find a house not struck by shells, but I cannot find one. I see destroyed shops, broken fences, roofs with holes where shells struck, windows boarded up with plywood, and deserted streets. The local people are living in bomb shelters. 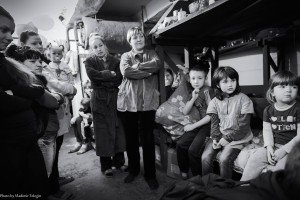 In the bomb shelter, the air is humid and it the smells of mold. Mold penetrates everywhere in these ragged walls and slowly destroys them from within. Beds are in close lines, the plaster on the walls is cracked, and a faint light bulb blinks overhead. Fifty two people, including children, have lived her for half a year.

One notices the presence of children at once. There are little green flip-flops and toys laying around, and inscriptions on the wall, like “Julia+Sabina=friends”. In the pre-war life, such an inscription might appear on a pavement, wall or fence, or it might be scratched on a notice board at school. But these children do not attend school. Only recently, after the ceasefire was announced on September 5, they were sometimes allowed to go out to breathe fresh air. Before that only the bravest adults went outside, to cook food.

In the adjacent apartment block, there are 40 apartments. It was not safe for residents to move around, so more than 100 people huddled together in the basement of the building. There is no electricity for long hours, and, hence, no communication with the outside world. The residents say they hide when they hear gunshots or explosions. People are upset there is no system of warning signals. Stoves have been built in the yard. The people prepare tea and hot dishes together there. Today, the first humanitarian aid was delivered to them. Flour, pasta, sunflower oil, and cabbage – people rejoice over it as children over Christmas gifts because they have run out of own food and there is no work for them anymore. Their building has been struck several times by shells.

A humanitarian battalion in Donetsk is providing targeted assistance to those in need. In their call centre, the phones constantly ring. Women and girl volunteers tell horror stories of how young mothers with children were stranded without their husbands and other means of life support. For weeks, they didn’t even see bread. Helpless, disabled people are dying of hunger.

The battalion tries to help the most vulnerable people – those who have nowhere to go and who cannot go on their own to stand in queues to receive aid from humanitarian convoys. The volunteers also described the fraudsters who try to cheat and catch the free food, even though they have the means to obtain it from commercial sources. “Apparently, the war didn’t teach lessons to everyone,” says the blonde girl Eugene. She adds, “Still, people have changed for the better. They’ve become kinder and there is now more solidarity…”.

P. S. Today, despite the so-called ceasefire, we heard once again thundering explosions in the Petrovsky district of Donetsk. “We’re so tired of war, so tired of hiding that we do not even run to the bomb shelters. Let come what may”, an old man said to me. He was nearly crying. At the same moment, a girl, about ten years old, in a pink jacket, was holding his arm and playfully hopping on one leg.