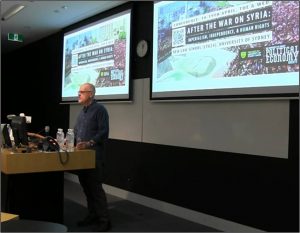 Over 150 people attended the ‘After the war on Syria’ conference, over 18-19 April at the University of Sydney. Seventeen papers were presented and each of five sessions saw enthusiastic and extended participation by the audience. This was the first Australian academic conference on the Syrian conflict in its six long years.

The range of presentations dealt with geopolitics, imperialism, the human rights industry, political Islam, minorities, the big powers’ balkanisation plans, media manipulation and war propaganda. Question and discussion sessions of more than one hour followed each set of presentations. A powerful response from the audience led to resolutions (see below) and the creation of a new social media group, the Syrian Sovereignty Action Network (SSAN) https://www.facebook.com/groups/294273510996434/.

Those involved in planning the conference were attacked by tabloid journalists such as Andrew Bolt at the Herald Sun, who claimed critical discussion of the war on Syria meant that Australian universities were in “decline”. Brilliant! Junk food vendors complaining about nutrition classes. Pretending concern for university standards, and trying to disqualify critical discussion of the war on Syria, the corporate media called me a “gasbag” and a “boffin”, our group “uni loonies” and the conference a “pro-Assad push”. Everything except reasonable discussion.

The corporate media attention incited some hate mail, but many curious people were attracted to the conference. The media attacks certainly increased our attendance figures. Around 100 people attended each of the five sessions.

On the first day, researcher Jay Tharappel spoke of ‘Syria & the Confusion of the Western Left’. His presentation and the others are being posted online at the Centre for Counter Hegemonic Studies’ website and YouTube channel.

Scientist and Syrian blogger Maram Susli spoke to ‘Balkanisation and ethnic cleansing in Syria and Iraq’, followed by postgraduate student Thomas Costigan on ‘The War on Syria: the origins of regime change’, and then Dr Hatem el Zein over ‘The Conflict over the Future of Syria from Hezbollah’s Perspective: The Axis of Resistance at Stake’.

In the second session on April 18, Karim Pourhamzavi presented his paper titled ‘Trump’s administration and the future of jihad: the role and future of ‘Political Islam’ in the region’, followed by Paul Antonopoulos on ‘Turkey’s Neo-Ottoman Imperial Ambitions on Syria’ and Marisa Della Gatta on ‘The Politics of fearfulness on Syrians: fears of sectarianism, Islamism and Islamophobia’. The last presentation, with a poem ‘Mr War’, was from young student Pola Fanous.

In the third (evening) session, Dr Nicholas al Jeloo’s paper was ‘After the War: Effects on Syria’s Cultural Diversity’, alongside Maram Susli on ‘How the wars in Syria and Iraq are linked’ and Marwa Osman from Lebanon on ‘Transformation of the Axis of Resistance at the Syrian Crossroad’. Video of all these presentations, plus the subsequent discussion sections, is being posted online.

On the second day, the morning session comprised Dr Drew Cottle’s presentation ‘The Syrian war and the Strategic Logic of US Imperialism’ and Dr Tim Anderson’s paper ‘The human rights industry during humanitarian war’. The final afternoon session had four papers. Suzan Hanna spoke on ‘The mirage of sovereignty and the ‘white man’s burden’: The role of media in the modern imperialism of Syria’; while Dr Therese Taylor provided literary and political analysis of the ‘Gay Girl Blogger – the politics of a cyber-hoax’. Young student Tianna Sukkarieh spoke to her paper ‘How have the western and corporate media presented this war? Western Media and the Syrian MacGuffin’. She was followed by our last presenter, lawyer Sam Saadat, who examined principles of justice during the Syrian conflict.

Resolutions urged by the audience and passed in the final session stated that this conference:

Research papers based on the presentations, after a refereeing process, will be published online at the Centre for Counter Hegemonic Studies, here.