Rejoinder to George Monbiot on Syria

By Professor Tim Hayward (University of Ediburgh), published on his website, May 2, 2017

In my previous post [April 28], I urged George Monbiot to check the basis of his assumptions about the narrative he accepts regarding Syria. In a tweeted response, he repeated his opinion that people like me, who question it, are denying a mountain of evidence. 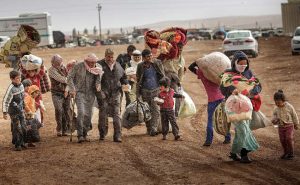 Refugees in Syria on the move

So to state a point that should not need stating: to question is not to deny – although nor is it to affirm. It is to seek knowledge and understanding. Being less impressed than George by the quantity of data presented as evidence, I have only ever commented on its quality. As can be seen from my earlier blogs on Syria, I was shocked to discover – and only very belatedly – how we have been systematically misled by organisations that many of us assume can be trusted implicitly.

George still trusts the Syria testimony of organisations like Amnesty International and Human Rights Watch. Far be it for me to tell him who to trust, but I did urge him to look more closely at what they present for evidence.

Instead of doing that, he has entrenched more deeply his defence of the NATO narrative. He also appears to believe he has satisfactorily responded to my concerns (via twitter).

I don’t think he has, so I shall just record how the exchange went, from the perspective of my twitter feed. My aim is to ensure that this important question for serious public debate is not just shut down. Our exchange centred on a set of six questions George tweeted:

Read the full article, including social media exchanges, at the original weblink above.

Related:
A response to George Monbiot’s ‘Disavowal’, pby the editors of Media Lens (UK), May 4, 2017

Guardian columnist George Monbiot has responded to our recent media alert on the alleged gas attack in Khan Sheikhoun, Idlib, Syria, on April 4:

This is a very serious misrepresentation of what we have argued in two media alerts. We made our position crystal-clear in the latest alert:

‘We have no idea who was responsible for the mass killings in Idlib on April 4; we are not weapons experts. But it seems obvious to us that arguments and evidence offered by credible sources like Postol should at least be aired by the mass media.’

To interpret this as an attempt to ‘dismiss the mounting evidence on the authorship of the #KhanSheikhoun attack’ is to exactly reverse the truth, which is frankly outrageous from a high-profile Guardian journalist…