RT.com, Monday, Nov 14, 2016   (with reports further below of chemical attacks and terrorist bombings by Daesh in Iraq) 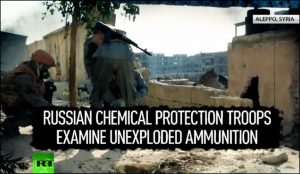 In a statement Monday, the General Command of the Syrian Army and Armed Forces confirmed that terrorist groups located in the eastern neighborhoods of Aleppo targeted the al-Nairab area and its surroundings with mortar shells containing chlorine on Sunday evening, SANA news agency reported. Scores of civilians and military personnel were injured, the military said.

Citing sources on the ground, RT Arabic reported that at least 28 government troops were injured. Local media gave the same figures for those injured.

RT’s Murad Gazdiev, reporting from Aleppo, said that after contacting hospitals, the number of soldiers injured in the attack may be as high as 44. “We don’t know exactly how many of them had died or how many are merely sick,” he added.

In a statement the Russian Ministry of Defense said that “around 30” troops had been affected by the attack, which originated from an improvised Hellfire launcher.

The attack is the third instance of terrorists using chemical weapons in Aleppo in the space of just two weeks. Previously, gas was used on October 30, when one person was killed and 40 injured. A second incident took place on November 3.

Following the discovery, Russia’s Defense Ministry addressed the UN’s Organization for the Prohibition of Chemical Weapons, asking it to send a mission to Aleppo. Both Russian and Syrian authorities repeatedly warned that militants from some hardline groups might use chemical weapons against civilians and government forces in the city.

The West has pointed the finger at Damascus and Islamic State (IS, formerly ISIS/ISIL) for using chemical weapons, but not militants in Aleppo, who are labeled the ‘moderate opposition’ by the U.S. and its allies.

Russian and Syrian aviation have halted air strikes since October 18 in Aleppo. The city remains split between the Syrian government forces and the terrorists. Russia and Syria have have been regularly organizing 10-hour “humanitarian pauses” in the city.

At least three Iraqis have lost their lives after Daesh terrorists fired mortars containing chemical agents against civilian areas south of Mosul as Iraqi forces press ahead with the large battle to liberate the northern city.

On Saturday night, the Takfiri militants fired 15 mortar shells, some of which filled with chlorine gas, at a village in Sharqat district, located on Tigris River banks 100 kilometers south of Mosul.

An unnamed Iraqi security source told Iraq’s War Media Cell that the victims of the incident were all members of a family. Two others were also wounded in the attack.

The attack comes days after New York-based Human Rights Watch warned against the use of toxic chemicals by Daesh militants in areas near Mosul as the terror outfit is making desperate attempts to keep its last stronghold in Iraq in the face of a large-scale liberation operation there.

“The use of toxic chemicals as a means of warfare is a serious threat to civilians and combatants in and around the embattled city of Mosul, and is a war crime,” HRW said.

Lama Fakih, Deputy Middle East Director at Human Rights Watch said the use of such banned arms show “a brutal disregard for human life,” adding that as the terrorists keep fleeing the areas under their control, “they have been repeatedly attacking and endangering the civilians they left behind.”

In another development, two fighters from the Popular Mobilization Units were killed at a bombing in a district situated north of the central city of Ramadi, Iraq’s al-Sumaria news website reported.

The victims were trying to defuse improvised explosive devices (IEDs) and mines planted in a house, according to the report.

On the Mosul battlefield, Iraqi forces managed to fully retake the Nimrud area, home to an ancient Assyrian city which had fallen to Daesh two years ago.

“Troops from the Ninth Armored Division liberated Nimrud … completely and raised the Iraqi flag above its buildings,” read an Iraqi military statement released on Sunday.

During the operation, the Iraqi troops inflicted heavy damage on Daesh.

Nimrud lies some 30 kilometers south of Mosul. The recapture of Nimrud came a few hours after the liberation of the nearby village of Nu’maniyah from Daesh.

Ravi was said to be among Daesh heads in the western Anbar Province and a direct supervisor of bombings and attacks against Iraqi security forces.

Since October 17, the Iraqi army, volunteer Shia and Sunni fighters as well as Kurdish Peshmerga forces have been engaged in an offensive to liberate Mosul, the last Daesh bastion in the Middle Eastern country.

In a relevant development on Sunday, Human Rights Watch accused Iraq’s Kurdish security forces of having illegally destroyed Arab homes in northern Iraq over the past two years in what may amount to a war crime.

The rights group cited in a report the obliteration of homes across 21 towns and villages in Kirkuk and Nineveh provinces between September 2014 and May 2016.

The report was based on a number of field visits and interviews with over 120 witnesses and officials.

At least 11 civilians have lost their lives and nearly three dozen others sustained injuries in a spate of bomb attacks that ripped through residential and commercial neighborhoods in and around the Iraqi capital, Baghdad, besides other areas in the country.

A security source, speaking on condition of anonymity, said three people were killed and eight others injured when a car bomb went off in the Kamaliya neighborhood of southeastern Baghdad on Sunday, Arabic-language al-Mawazin news agency reported.

Security forces immediately cordoned off the site of the attack, and ambulance workers ferried the wounded to a nearby hospital.

Two civilians also died and eight others were injured when an improvised explosive device went off near a commercial district in the town of Abu Ghraib, some 25 kilometers west of Baghdad.

Additionally, one civilian lost his life and five others suffered injuries when a car bomb struck Baghdad’s northeastern district of Sadr City.

Also on Sunday, a bomb exploded as a car was travelling along Muhammad Qasim road in eastern Baghdad, leaving one person dead and three others injured. The explosive device had apparently been placed under the vehicle.

Earlier, a civilian was killed and three others injured when a car rigged with explosives was detonated in the al-Obaidi neighborhood of eastern Baghdad.

Separately, four people were injured when a bomb attack struck the capital’s northern neighborhood of Sha’ab.

Elsewhere in the town of Hawijah, located about 282 kilometers north of the capital, two civilians were killed and seven others injured in a bomb explosion that targeted displaced families.

An improvised explosive device also went off in farming lands southwest of the city of Baqubah, located some 50 kilometers northeast of Baghdad, leaving one civilian dead and another injured.

The United Nations Assistance Mission for Iraq (UNAMI) says a total of 1,792 Iraqis were killed and 1,358 others injured in acts of terrorism, violence and armed conflict in October.

According to the UN mission, the number of civilian fatalities stood at 1,120. Violence also claimed the lives of 672 members of the Iraqi security forces. A great portion of the fatalities was recorded in the capital province of Baghdad, where 268 civilians were killed.

Gruesome violence has plagued the northern and western parts of Iraq ever since Daesh terrorists mounted an offensive there more than two years ago, and took control of portions of Iraqi territory.