There is a parallel but lesser-publicized narrative running alongside the dominant media-favored Trump-Russia collusion story. It centers not on Trump and his alleged collusion with Moscow, but on Fusion GPS, the shady firm behind the infamous Steele dossier.

Stories about the 35-page ‘intelligence report’ written by former MI6 spy Christopher Steele very often do not make so much as a passing mention of Fusion GPS or its co-founder, former journalist Glenn Simpson, but both are crucial players in what could potentially be a scandal of massive proportions. 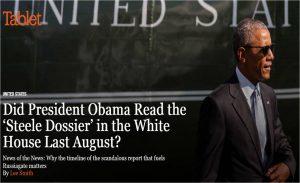 A recent investigation by online magazine Tablet using public sources to “trace the evolution” of the dossier has pieced together information which suggests central elements of the Russiagate story emerged “not from the British ex-spy Christopher Steele’s top-secret “sources” in the Russian government” but from a series of stories co-written by Glenn Simpson and his wife Mary Jacoby, which were published in the Wall Street Journal before Fusion GPS ever existed

Simpson and Jacoby had written about former Trump campaign chairman Paul Manafort and his dodgy dealings in Ukraine as far back as 2007. It stands to reason, Tablet writer Lee Smith explains, that when the Trump campaign hired Manafort in 2016, Simpson and Jacoby’s ears perked up again. Could Manafort be the key to bringing down Trump? Manafort was a corrupt guy with some dubious connections, and Trump had just hired him, so the stage was set. Manafort’s involvement with the campaign meant that Trump’s ties to Russia would be the target of the firm’s opposition research — which they would soon be hired to conduct.

Russiagate fans who claim to be part of the ‘resistance’ to Trump are also strikingly ‘resistant’ to any piece of information which doesn’t back up their preferred version of events. To them, the roots of and motivations behind the Steele dossier are all but irrelevant. All that matters in ‘Russiagate-land’ is that it is chock-full of salacious accusations about Trump. But the origins of the Steele dossier, as Smith explains, are hugely significant. Why?

If former President Barack Obama used instruments of the state to legitimize an unverified intelligence document to obtain warrants to spy on a candidate’s campaign — and then attempt to delegitimize the election results when the disfavored candidate won, Smith writes, that would be a scandal that “dwarfs Watergate.”

It’s important to note that Tablet’s investigation into Fusion GPS and the Steele dossier is not supposed to be a hit job on Hillary Clinton. Nor is its aim to exonerate Trump of any and all wrongdoing. It simply is what it is: a deep dive into how the Steele dossier came about and the timeline of events leading to its publication. But let’s get back to how it all happened.

For those only coming to know of Fusion GPS’s role in Russiagate now, here’s a brief history: Fusion GPS was hired in 2015 by conservative website the Washington Free Beacon to dig up dirt on Trump. One of the website’s backers was a supporter of Marco Rubio at the time, which explains the website’s efforts to fund opposition research against Trump.

Later, the Clinton campaign and Democratic National Committee, through the Perkins Coie law firm, paid Fusion GPS to compile the now-infamous dossier. To help produce that document, Fusion hired ex-British spy Christopher Steele — and paid him $168,000 with the money it had received from Perkins Coie (which was $1.02 million in total).

In a Facebook post published by Jacoby (Simpson’s wife) in June of this year, she openly complains not enough credit has gone to her husband for blowing open Russiagate: “It’s come to my attention that some people still don’t realize what Glenn’s role was in exposing Putin’s control of Donald Trump,” she wrote. “Let’s be clear. Glenn conducted the investigation. Glenn hired Chris Steele. Chris Steele worked for Glenn.”

But, confirming suspicions that Steele’s role in composing the dossier was much smaller than Fusion and the media led people to believe, was the revelation that the firm also hired Nellie Ohr, the wife of Justice Department official Bruce Ohr, to work on the document. Smith contends that perhaps Ohr, who is fluent in Russian and whose expertise is Russian history, may have conducted interviews and written much of the ‘Steele’ dossier herself. He suggests that Steele’s position as a former spy may have been used by Fusion GPS to lend more credibility to the document and allow them to market it as an ‘intelligence product’ — despite the fact that Steele has not lived or worked in Russia for 25 years.

But Ohr hasn’t lived in Russia for decades either — and she isn’t a spy or a journalist, as Smith notes. This presumably is why much of the ‘reporting’ in the dossier is based on rumor and hearsay; the kind of information that gets bandied around in Moscow’s expat circles where everyone is trying to one-up each other by claiming to have ‘insider’ knowledge.

This phenomenon is actually key to understanding not just Russiagate but Western reporting on Russia in general. It’s almost a kind of Cold War nostalgia. Journalists are lured by the prospect of appearing to be ‘in on’ the latest Kremlin intrigue or, even better, the appearance that they are so important that the Kremlin is out to get them; that they are truly living on the edge.

It’s why journalists like Luke Harding and Anne Applebaum want their readers to believe they are part of James Bond-style events in Moscow, where KGB agents are breaking in their windows and stealing their purses. More than anything else, those dubious tales are about confirming their own relevance and making sure their readers know how ‘important’ they are: ‘Look at me, I was brave enough to venture into the Russian abyss, please acknowledge my efforts with endless praise and adulation.’

What’s really, truly mysterious and intriguing about the Steele dossier is that its alleged author has admitted that it may only be 70 per cent true, but he hasn’t divulged which 30 per cent is untrue. As Smith writes in a separate piece for Tablet, imagine a prosecutor telling a jury that 70-90 per cent of what he is going to say is true, but up to 30 per cent of it will be false — and the jury just has to guess which parts they should believe. “That case would be thrown out of court,” he writes.

Journalists who are willing to look beyond the partisan nature of American politics and get to the crux of a story as controversial as this are sadly few and far between — and Smith’s investigation for Tablet deserves to be read in its entirety to understand the scale of the potential deception that has underpinned Russiagate.

Danielle Ryan is an Irish freelance journalist, currently based in Budapest, Hungary. Her work has been featured by Salon, The Nation, Rethinking Russia, Russia Direct, teleSUR, The BRICS Post and others. Follow her on Twitter @DanielleRyanJ, check out her Facebook page, or visit her website: danielle-ryan.com.