Readers of iPolitics.ca have harsh words for editor selection of extremist, anti-Russia commentary

Readers of the online, mainstream news publication in Canada iPolitics.ca are complaining bitterly about a right-wing, anti-Russia screed selected and published by the editors on September 3. 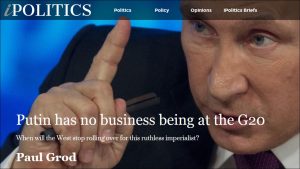 The screed is titled ‘Putin has no business being at the G20’. It is authored by Paul Grod, president of the extreme-right Ukrainian Canadian Congress, and published as a ‘featured opinion’. Below is a selection of reader comments responding to the screed.

The opinion piece on iPolitics.ca is part of an agitational campaign by the Ukrainian Canadian Congress to convince the Canadian government to increase its economic sanctions against Russia and to donate or sell advanced weaponry to the Ukrainian government.

The UCC is a strong backer of the corrupt governing regime of Petro Poroshenko in Ukraine. For more than two years, the regime has waged a cruel war against the people of eastern Ukraine.

The people of eastern Ukraine who are under attack live in an historic industrial region known as Donbass. The majority speak Russian and have a strong multinational, multi-ethnic identity. They rebelled against an ultra-Ukrainian nationalist coup d’etat that overthrew Ukraine’s elected president in February 2014. Their rebellion demanded autonomy; specifically, they wanted a devolution of power in Ukraine’s highly centralized governing system, to create a federal system (similar to those of Canada, the United States and Russia). But today, as a result of the war waged against them for more than two years, most Donbass people would probably vote for secession from Ukraine if Russia were to recognize such a referendum.

The governing regime in Kyiv basks in support from the imperialist governments of the NATO military alliance. It receives billions of dollars in financial aid from the IMF and other international institutions as well as money, military training and weapons directly from the U.S., Canada and Britain. Western media has acted as cheerleaders for Kyiv’s civil war.

Mainstream media outlets in Canada come under harsh condemnation from their readers every time they push their pro-Kyiv line. A recent, substantive example of such condemnation was voiced by readers of the Globe and Mail national daily.

Selection of comments by readers of iPolitics.ca responding to published anti-Russia commentary

* I just googled our author of this article and what I found may (just may) explain the fact there was not a preface outlining positions or posts this author has taken. Journalist not so much–more the head of a corporate energy company and involved in Ukrainian politics… so being President of Rodan Energy and the executive of the Ukrainian Congress just somehow got missed or ignored?? For my point of view, I want balance not bias (or should I say propaganda) and given the country that has started 100% of all the wars now going on–with less than decent reasons–more [like] excuses. I want to hear views even from Putin.

Obama and the Pentagon are the sole aggressors–they the ones with a lot of lives to account for….civilians, in Iraq, Afghanistan, Syria, back to Iraq, then Libya…..meant to never end. Not once has any Western leader mentioned ‘peace’. Instead, half-baked hatred comments and accusations kinda like Israelis….forgetting who stole what….and how they would react if the situation was totally reversed.

* And the U.S. is supporting the Saudis in every way bombing Yemen into oblivion so maybe they should [not] be invited either.

* Canada sold the Saudis millions of dollars worth or armoured vehicles which have been used in the war against Yemen – over 10,000 innocent civilians killed so far while Trudeau blabbers to China about human rights. Would assume right to life is a basic human right. Maybe hypocrite Canada should not be invited [to the G20] either.

* Only the simplest reader would fall for Grod’s spin on the world. Russia may be a big concern for the current government of the Ukraine, but to suggest that it is a threat to the world is the equivalent of wearing political blinders. The Ukraine was a cesspool of corruption since it’s independence from the Soviet bloc and it continues to be a cesspool of corruption with it’s new, disturbingly ethno-nationalist government.

Russia is currently aiding the Assad government in it’s civil war. Western media usually leaves out the fact that apart from the current Syrian government and the Kurds, all the fighting factions (including the Western backed entities) are religious zealots.

When I look at the record of Putin verses the record of H. Clinton, it’s pretty obvious to me who we should be most concerned about…

* The extreme racist, bigoted right wing has existed in the Ukraine since Tsarist times. There was a lot of support in eastern Europe for the Nazis.

* Too bad the Ukraine is an American puppet state with a government infested with neo-Nazis. Its economy is a shambles and it is a country divided thanks to the American backed coup of 2014. If you want to read an excellent and authoritative account of what really happened there, read Diana Johnstone’s, book Queen of Chaos [November 2015]. It is a bloody disgrace our media sees fit to publish this sort of twaddle.

* Talk about ‘making stuff up’. Putin is a breath of fresh air. Doesn’t matter though. The U.S., NATO, the EU, G20 have all run out of gas. Bankrupt and corrupt, they have lost the respect of their own peoples. The U.S. can’t fight Russia and China and their own people. And people are really sick of any regime that pushes this line. We can fight it out along this line if it takes all summer.

* In 2013, the Worldwide Independent Network and Gallup International did a survey asking 66,000 people from various countries around the world which country is the biggest threat to world peace. The results that WIN/Gallup came across were quite shocking. According to people interviewed in 36 nations, the biggest threat to world peace today is the United States of America.