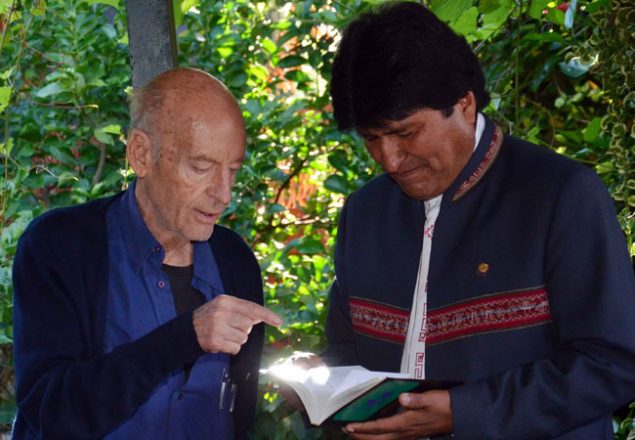 The Party Québecsolidaire was established in Montreal in 2006, as a result of the  coming together of left wing and antiglobalization forces. Among its characteristics, such as feminism and environmentalism, this party defines itself as being on the left and backing the sovereignist perspective of Quebec.

“Urgent resolution on Bolivia: It is imperative to say this: what happened last week in Bolivia was a coup d’etat that reminds us of the darkest hours in the history of Latin America.

Published in Spanish on Trabajadores, Nov 23, 2019

Evo and Eduardo Galeano in… ¡Quebec!

As reported in Trabajadores, “No force, anywhere in the world, can make the people turn the anti-imperialist movement into an appendage to the foreign policy of the Trudeau Government for Latin America and the Caribbean.” 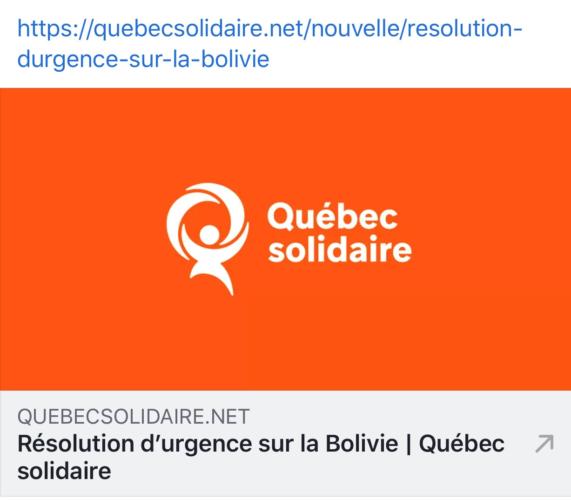 ¡More true than ever!

The National Assembly of Quebec  (Assembléenationale du Québec) is the legislative arm of the province of Quebec in Canda.

Of all the Canadian provinces, Quebec is the only one that has a legislature denominated as a National Assembly that is recognized by the Canadian Federal government.

The Party Québecsolidaire was established on 4 February 2006 in Montreal, as a result of the  coming together of left wing and antiglobalization  forces.  Among its characteristics, such as feminism and environmentalism, this party defines itself as being on the left and backing the sovereignist perspective of Quebec.

On 8 December 2008, the main candiate of Québecsolidaire was elected the provincial elections when Amir Khadir was elected as Member for the riding of Mercier in Montreal.

After two elections, in 2018, the party obtained an important win as it got seven members elected making it a total of 10 escaños in the National Assembly that had a majority of members from the PartiQuébecois ( neo-liberal/sovereignist), party that had in three separate occasions formed  the government.

Therefore, the Party Québecsolidaire is recognized officially as the second party in opposition to the Liberal Party and ahead of the PartiQuébecois.

“Urgent resolution on Bolivia: It is imperative to say this: what happened last week in Bolivia was a coup d’etat that reminds us of the darkest hours in the history of Latin America.

The great Uruguayan author, Eduardo Galeano, wrote at the beginning of the 70’s:

‘(Latin America ) continues working as a maid. Constinues existing to service the needs of others, as a source of petroleum, iron, copper, meat, fruits and coffee, the raw materials and foodstuffs that are sent to the rich countries that benefit by consuming them, much more than what Latin America gains by prodding them. The jet-set technocrats are the heirs of the conquerors in their sailing war ships.”

“In 2019, unfortunately, these statements are still relevant to date. The coup d’etat in Bolivia was planned by the Bolivian economic elite with the Organization of the American States (OAS) as an accomplice.  Let us remember that the headquarters of the OAS  is in wqshington  and that 44% of its financing comes from the United States. The OAS is, no more nor less, than the diplomatic arm of USA imperialism.

When it cast doubt on the electoral resultas that inidicated a clear win for President Evo Morales, the OAS helped the take over of power of an illegitimate and profoundly regressive government. From the moment of the forced resignation of  Evo Morales, the Whipala, the seven coloured flag of the indigenous peoples and the second official flag of Bolivia, was removed from the presidential palace and has been burnt. This was an openly racist act.

With the aim of denuncing this tragic stike against democracy and human rights, the Deputy for Laurier-Dorion, Andrés Fontecilla, and the delegate of the  Verdun Association , Zachary Williams, presented the following urgent motion before the congress of the Party Québecsolidaire:

–The Bolivian president , Evo Morales, obtained the majority of votes in the past presidential elections in Bolivia;

– President Morales agreed to have a second round of votes, despite the fact that according to the Electoral Law of Bolivia, having obtained a clear majority it was not necessary;
– The coup d’etat allowed an illegitimate government to take over in Bolivia that has promoted violence against progressive activists and the indigenous people;

– That Québecsolidaire formally denounce the coup d’etat in Bolivia and the foreign interference of the OAS;

– That Québecsolidaire denounce the violence of the extreme right against President Evo Morales, the progressive and popular movements and against the indigenous communities of Bolivia.”

There is more. the leader of the most important union in Canada, Unifor, visited Evo in México.