Trump’s speech to the assembled Gulf leaders in Saudi Arabia on Sunday, May 21 is worth reading in full. It is deeply disturbing. 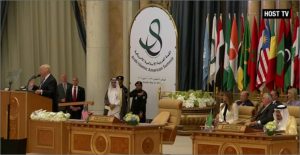 Having praised himself for his $110 billion arms deal with the Saudis, he goes on to talk about the threat posed by terrorism, and what a wonderful job the U.S. and the Gulfis – that is, the leading state sponsor of the region’s supremacist death squads, and its assembled proxies – are doing in combating it. He then goes on to claim that at the root of the region’s terrorism lurks – guess who? The power leading the regional pushback against ISIS and Al Qaeda – Iran.

“Starving terrorists of their territory, their funding, and the false allure of their craven ideology, will be the basis for defeating them,” he says. “But no discussion of stamping out this threat would be complete without mentioning the government that gives terrorists all three—safe harbor, financial backing, and the social standing needed for recruitment”.

This is pretty much exactly how Joe Biden – in his own attempt to whitewash U.S. involvement – described Trump’s Saudi hosts three years earlier. But Trump is not talking about IS’s Saudi backers; he is talking about Iran – the same Iran that is responsible, with its Syrian and Russian allies, for that fact that the IS flag is NOT today flying over Damascus.

It gets worse. Look at the following passage, just after he calls on “all nations of conscience to work together to isolate Iran”:

Will we be indifferent in the presence of evil? Will we protect our citizens from its violent ideology? Will we let its venom spread through our societies? Will we let it destroy the most holy sites on earth? If we do not confront this deadly terror, we know what the future will bring—more suffering and despair. But if we act—if we leave this magnificent room unified and determined to do what it takes to destroy the terror that threatens the world—then there is no limit to the great future our citizens will have.

The birthplace of civilization is waiting to begin a new renaissance. Just imagine what tomorrow could bring. Glorious wonders of science, art, medicine and commerce to inspire humankind. Great cities built on the ruins of shattered towns. New jobs and industries that will lift up millions of people.

This is the language of genocide. Heroism and genocide have always gone hand-in-hand in the settler-colonial ideology internalised by the likes of Trump, for which ‘building great cities on the ruins of shattered towns’, be they native American, Palestinian, or, it seems, Iranian, has always been the highest accolade.

Some have accused Trump of making novice blunders during his first lumbering foray into the Middle Eastern maelstrom. But I think he knows exactly what he’s doing. He knows very well that the loosely-defined ‘ideology’ he speaks of as ‘spreading venom’ will be much more readily interpreted by his hosts as Shi’ism – the creed to which Iran actually subscribes – than as Wahhabi’ism, the sectarian ideology behind ISIS, Al Qaeda and the Saudi state.

And just to make clear what he is demanding be done to this ill-defined – but, nudge-wink, understood – enemy, he spells it out:

A better future is only possible if your nations drive out the terrorists and extremists. Drive. Them. Out.

DRIVE THEM OUT of your places of worship.

DRIVE THEM OUT of your communities.

DRIVE THEM OUT of your holy land, and

DRIVE THEM OUT OF THIS EARTH.

Doesn’t this sound horribly like Trump giving the green light to an all-out war of eradication against the region’s Shia – that is, a war very similar to the one actually being waged, in Syria, Yemen and elsewhere, by Trump’s government, his hosts, and their proxies?

At the same time, having found it harder than expected to rip up the Iran deal, Trump is instead hoping to render it null and void by simply blackmailing individual nations into not dealing with Iran, ensuring the formal lifting of sanctions is replaced by an informal blockade.

This is where Qatar comes in. Qatar  has clearly not been playing ball with the U.S.-approved, Saudi-led ‘isolate Iran’ programme. This is partly because, ever since the current Emir toppled his pro-Saudi father in 1995, the country has made independence from Saudi Arabia a hallmark of its foreign policy. But it is mostly because Qatar and Iran share the world’s largest natural gas field – known in Qatar as North Field and in Iran as South Pars.

In fact, the two countries have had decent relations for some time. In May 2010, for example, in stark contrast to the hardline attitude of his Gulf neighbours, the Qatari Emir Al-Thani joined forces with President Assad of Syria, no less, to support Turkey’s diplomatic proposals over Iran’s nuclear programme.

Then, in 2014, in a ‘dry run’ of today’s crisis, the Saudis, UAE and Bahrain withdrew their ambassadors from Doha following a Qatari proposal to help Iran develop its side of the North Field/ South Pars gas field.

But what’s taking place now is much more serious. And that is largely because of the likely earth-shattering impact of the decisions surely now being considered by the two powers over where their gas will go, how it will get there – and in what currency it will be sold.

In April of this year, a self-imposed 12-year moratorium on the development of Qatar’s share of North Field came to an end, potentially opening up a flood of Liquified Natural Gas (LNG) onto the market in the years to come. But where will it go? Qatar had originally been hoping to build an LNG pipeline to the Mediterranean via Saudi Arabia, Syria and Turkey; indeed, many have speculated that Assad’s blocking of this proposal in favour of an Iran-Iraq-Syria route was a major reason for Qatar’s support of the anti-government insurgency in Syria.

The failure of this insurgency, however, has spelled the death of this proposal, leaving Qatar bound to look east to Asia – already its biggest customers – for their LNG markets. But most of the existing eastbound LNG pipeline infrastructure is controlled by Iran. For Qatar, then, cutting its Iran links would be cutting off its nose to spite its face. This is why the Saudis aim to demonstrate that the alternative is having their entire face cut off.

For the U.S., the stakes couldn’t be higher. In 2012, Iran began to accept yuan for its oil and gas payments, followed by Russia in 2015. If this takes off, this could literally spell the beginning of the end of U.S. global power.

The dollar is the world’s leading reserve currency, in the main, only because oil is currently traded in dollars. Countries seeking foreign exchange reserves as insurance against crises within their own currencies tend to look to the dollar precisely because it is effectively ‘convertible’ into oil, the world’s number one commodity.

This global thirst for dollars is what allows the U.S. to print endless amounts of them, virtually for free, which it can then exchange for real goods and services with other countries. This is what is known as ‘seignorage privileges’; that is, the ability to absorb ever-increasing amounts of goods and services from other countries without having to provide anything of equivalent value in return. In turn, it is this privilege which helps to finance the staggering costs of the U.S. military machine, now running at over $600 billion per year.

Yet, this whole system falls apart once other countries stop using the dollar as their prime reserve currency. And they stop doing this once oil stops being traded in dollars. This is one reason why the U.S. was so keen for Saddam Hussein to go after he began trading Iraqi oil in Euros.

And, slowly but surely, this change is already occurring. In 2012, the People’s Bank of China announced it would no longer be increasing its holdings of U.S. dollars, and two years later, Nigeria increased its holdings of yuan from two per cent to seven per cent of its total foreign exchange reserves. Many other countries are moving in the same direction.

At the same time, China has been on a gold-buying spree, setting up its own twice-daily  pricing of gold in yuan in 2012 as part of what the chair of the Shanghai Gold Exchange called the “internationalisation of renminbi”[1], ultimately aiming towards making yuan fully convertible to gold. Once this happens, the choice for oil-producing countries between trading oil for ever-more-worthless paper dollars, or trading it for convertible-to-gold renminbi will be a no-brainer. For Qatar, the pull may already be irresistible.

Hence the urgency to pre-emptively punish Qatar for its likely move towards a joint venture with Iran to supply Asia with LNG priced in yuan. The aim is to demonstrate that, however economically suicidal it may be in the long term to snub Iran and continue trading in the dollar, it will be politically suicidal in the immediate term to do anything else.

Just how far Trump and his Arab friends are prepared to take this remains to be seen. But Trump has repeatedly suggested that the whole point of having a military is to use it.

This article also appears on Dan Glazebrook’s website. He is a UK-based journalist.

Note:
[1] ‘Renminbi’ is the name of the Chinese currency, translated as ‘the people’s currency’. The ‘yuan’ is the unit of measure of the renminbi.