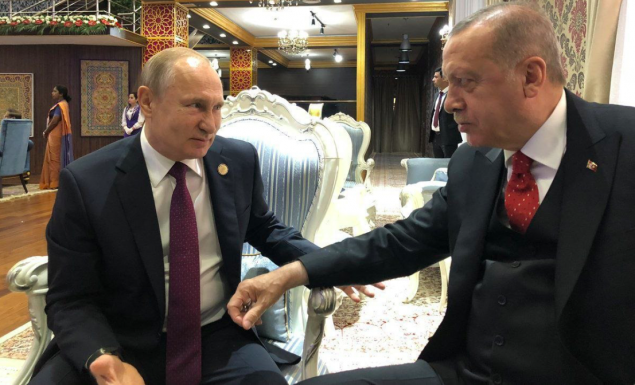 🇷🇺🇹🇷 President #Putin received President @RTErdogan at the Kremlin. The two leaders are discussing possible solutions to the #SyrianCrisis taking into consideration the aggravation of the situation in the #Idlib de-escalation zone 🔗https://t.co/WmgA7u59sF pic.twitter.com/Q6IMLZUqOR

Prior to the meeting, the two leaders made the following statements:

Thank you for coming to Russia. As usual, we have things to discuss. The situation in the Idlib zone in Syria has deteriorated so much that we need to have a direct and personal discussion.

First of all, I would like to express our sincere condolences over the death of your military personnel in Syria. Loss of life is always a big tragedy.

Regrettably, as I have told you by telephone, nobody, including the Syrian military, was aware of your troops’ location. At the same time, there were casualties among Syrian servicemen as well. The Syrian army reported major losses.

Therefore, we need to discuss everything and analyse the current developments so that, first, this does not happen again and, second, that this does not damage Russian-Turkish relations, which I know that you value as well.

As you requested, we are ready to begin our talks one-on-one, and then our colleagues, who are with us in this room, will join us, if necessary.

Once again, welcome to Moscow.”

“Yes, Mr President, I would like to also thank you for your welcome.

As you know, we were going to hold this meeting in Turkey but due to your ongoing work on constitutional amendments, we decided to accept your invitation and come here. Certainly, this meeting on Idlib talks is very important.

The situation in Idlib is indeed very tense. I know that the entire world is watching us today and I think that the action and decisions we take today will definitely have a mitigating effect.

This is a time when the relations between our countries have indeed reached a peak. Of course, this concerns the defence industry, trade and other areas; they continue developing.

We believe and say that we need to make progress in this area. In fact, this is our biggest task, to move forward and develop our relations. I believe we will succeed.

Once again, I would like to thank you for your welcome.”

Erdogan previously said he had asked Putin to “step aside” in Syria and allow him to deal with Damascus “face to face”, while Syrian President Bashar Assad stated in an interview just one day before the Putin-Erdogan meeting that the conflict between the Turkish people and the Syrian people is “illogical”.

Around the same time that the meeting was taking place, US Secretary of State Mike Pompeo reiterated Turkey’s right to self-defense in connection with the situation in Idlib, during a press briefing.

We are firmly convinced that our NATO partner, Turkey, has every right to defend itself against the risks created in Syria by Assad, Russians and Iranians,” said Pompeo, answering a question about how he assesses “the partnership between Russia and Turkey.”

He recalled that a few days ago, US President Donald Trump held talks with Turkish President Tayyip Erdogan. The US Secretary of State did not comment on the ongoing negotiations between the leaders of Turkey and Russia in Moscow.

“The Turkish government has requested a number of things, we are evaluating all these requests. Our team (the US State Department) together with the Department of Defense team are deciding how best to reduce violence and a larger world there and stop the ongoing large-scale humanitarian crisis,” said Pompeo.

Catherine the Great, served as empress of #Russia for more than three decades in the late 18th century. She captured lots of Ottoman territories.
LMAO, Russians never stop trolling.🤣 pic.twitter.com/lKn2D0pQ3D

The two leaders spoke tete-a-tete for approximately 3 hours, and then they were joined by their respective delegations. The entire negotiation ended after 5 hours 40 minutes.

The briefing, following the negotiations can be seen here:

Erdogan Invited Putin to Visit Turkey to Celebrate Anniversary of Bilateral Relations. Putin, on his part said that Russia, Turkey agreed on common document on settlement in Syria.

Russian President Vladimir Putin announced that he has negotiated an agreement to resolve the ongoing tensions in Idlib province with his Turkish counterpart Recep Tayyip Erdogan. The two countries have agreed following “uneasy, but productive” talks that they should not reduce their efforts in the fight against terrorism.

Turkish President Recep Tayyip Erdogan stated that his country will be sending additional forces to Idlib province under a new agreement with Russia, but that the status of Turkey’s Operation Spring Shield will be “changed”.Erdogan added that starting at midnight between 5 and 6 March a ceasefire regime will be established in Idlib for both Turkish and Syrian forces. At the same time, the Turkish president said that the army reserves the right to respond to any actions of the Syrian forces.

It includes the following items:

“It is inevitable to establish a new status in Idlib after the sad events of the regime’s aggression targeting our soldiers,” President Erdogan said.

“The spirit of cooperation between us and Russia has made an unprecedented contribution to international efforts to end the conflict in Syria,” President Erdogan explained.

The entire document is to be published in English, Russian and Turkish “soon,” when more details will follow. It is showing, however, that a direct military intervention by Turkey is unlikely to work, and Erdogan went to the negotiating table.

The following map shows the gains and setbacks of Turkish forces and the “moderate opposition” have made since Turkish operation Spring Shield began. 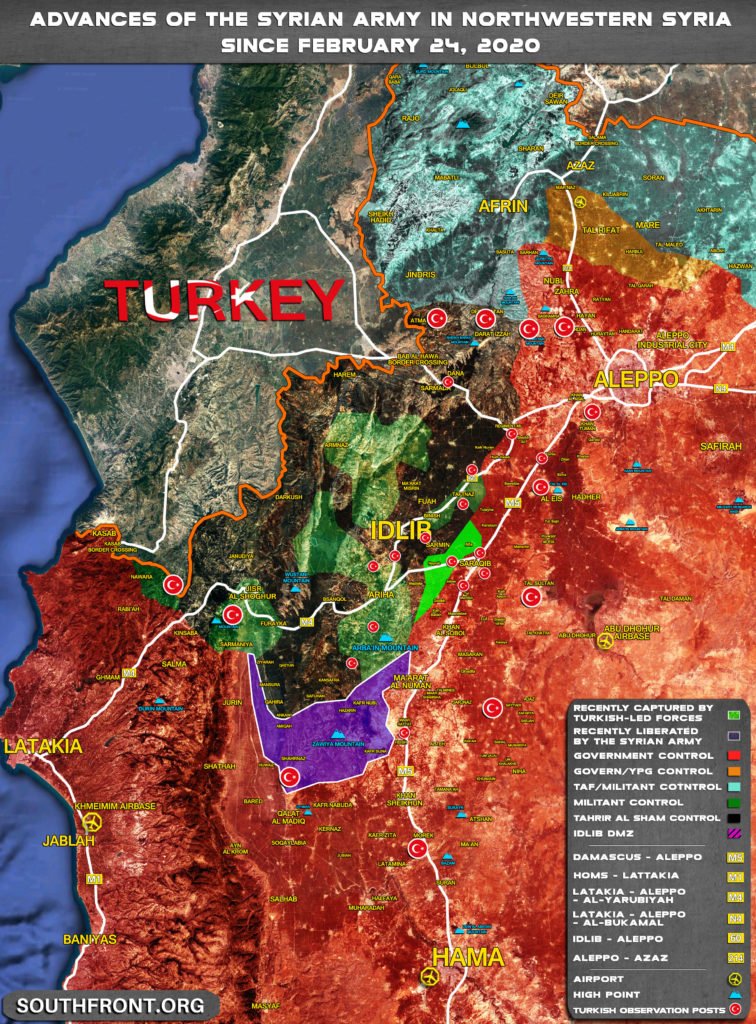 The new Turkish-Russian agreements have several important implications for the situation in Greater Idlib:

On January 14, 2020, SF released the following video analysis on the Idlib ‘ceasefire efforts’ and their results for the anti-terrorism fight in Greater Idlib. It still remains useful to explain the situation in general: