Protests and road blockages by farmers across Ukraine against tax hikes 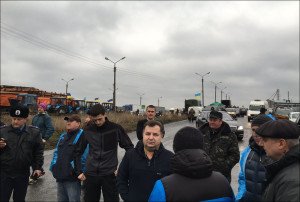 Ukrainian farmers are dissatisfied with the cancellation of a special Value Added Tax (VAT) regime for agriculture. They have protested by blocking roads in the five regions of the country – Mykolaiv, Ternopil, Kyiv, Khmelnytsky and Chernivtsi, including the highway connecting Kyiv to Odessa.

According to the Agrarian Agency of Ukraine, the initiator of the protests  was the Ukrainian Agrarian Council, which appealed to President Petro Poroshenko for a veto of measures adopted by the Verkhovna Rada on December 24 concerning amendments to the Tax Code.

“Speaking for the cancellation of the special VAT regime, the government had promised to resume compensation of VAT on exports of grain and industrial crops. However, as it became clear during the discussion of the bill in parliament, it was a hoax. The budget simply does not provide adequate relief. The cost item was reduced by 6.6 billion hryvnia ($264 million),” said a statement by protesters. 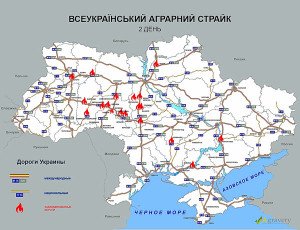 In addition, the law introduces a norm for the transfer of 75% of the VAT to the budget [reducing the portion of the tax previously transferred to farmers] and it almost doubles the tax on arable land, pastures, hayfields, perennials and water used in irrigation.

This is not the first protest of Ukrainian farmers. Since December 24, farmers have gathered and rallied near the Rada [Parliament]. There were scuffles with law enforcement officials after protesters tried to carry to the Rada a pig in a coffin, symbolizing the death of livestock. The building was cordoned off. Rally participants held placards reading “Keep, don’t stifle, our villages”, “Don’t destroy Ukraine!”, “Without the village – there is no state!”. 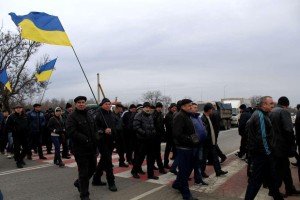 The protesters have called on Ukrainians to join their rallies and expect 25,000 more farmers from all regions of the country to join them.

Ukrainian farmers are staging dozens of rallies nationwide and blocking roads to protest against change in taxation enacted into law by deputies before their holiday recess.

The angry farmers and their supporters are demanding simplified tax system and special VAT rules for the agricultural sector in 2016, something the budget for 2016 lacks.

Hundreds of agrarian workers protested to no avail outside parliament before the new budget was passed [on Dec 24]. They carried a coffin containing a dead pig with a sign reading, “These tax reforms are death to business.”


Today, December 28, 2015, the entrepreneurs working in agriculture will continue protests against the law approved by the Supreme Council [Rada] “On Amendments to the Tax Code of Ukraine and some other legislative acts of Ukraine on revenues to balance the budget in 2016” (Reg. №3688 ).

The law proposed abolition of the current system of handling the Value Added Tax. Instead of creating a transparent system of refunds, a new regime now has two VAT registries. According to protesters, this deprives small and medium farmers and their associations and cooperatives the possibility of prompt and full receipt of VAT refunds on exports of products other than grain and industrial crops. It also preserves opportunities for extortion and corruption in the registry.

Farmers believe that the legislation discriminates against taxpayers and creates grounds for corruption. They do not believe the government is ready to provide full and prompt VAT reimbursements. They want the abolition of the new VAT regime.


“Today, Ukrainian farmers are almost devoid of any mechanisms of state support, ” says a spokesman for the Ukrainian Agrarian Board. “This law will bankrupt many farms. The aricultural industry employs millions of people and exports of agricultural products provide 30 per cent of foreign exchange earnings to the country. Destruction of farmers means not only the loss of jobs and export earnings but also it will destroy the Ukrainian village. This is what we are trying to prevent.

“Because of all this, the agricultural community urges President of Ukraine Petro Poroshenko to veto the tex ammendment bill.”

Traffic on roads will be limited in many regions of Ukraine. The exact coordinates of road blockages will be announced for the convenience of drivers during the day. The VAR is apologizing to all Ukrainian drivers for the inconvenience that will arise during protests. It says blocking the trffic on roads in Ukraine is a desperate step because all other attempts at dialogue with the government ended in nothing…

The Verkhovna Rada, Ukraine’s parliament, has passed amendments to the Tax Code representing a compromise between the proposals put forth by the Ukrainian government and the parliament’s tax committee for changes to the Ukrainian taxation system that are needed for the adoption of the 2016 national budget and the fulfillment of its revenue part.

The bill was presented by member of Parliament and head of the parliamentary committee on taxation and customs policy, Nina Yuzhanina. In her words, the adopted document is a compromise solution, featuring amendments introduced both by the government and her committee. In particular, the point at issue are excise taxes, the taxation of agricultural producers and the administration of value-added tax (VAT).

Yuzhanina says that the bill changes approaches to the taxation of farmers in part of VAT payments. The payment of this tax will be split in the following way: producers of grain and industrial crops shall transfer 15% of the tax to special accounts (for further use when they need) and 85% shall be funneled to the national budget. Cattle, meat and dairy producers shall send 80% to the special accounts and 20% to the budget. The model for other producers will be 50-50. The previously suggested model was similar to all agrarian producers: 75% was proposed to be paid to the budget and 25% to the special accounts.

Yuzhanina also highlighted changes in excise taxes on tobacco, alcohol and fuel. In particular, the bill proposes a 100% increase in excise tax on beer and wine except for natural grape wine. Excise tax on ethyl alcohol and alcoholic beverages is planned to grow by 50% and low-alcohol beverages by 300%. The lawmakers also decided to let the Cabinet of Ministers fix minimum prices of tobacco products.

The abnormally warm weather conditions in the first half of the winter season may affect a gross yield of winter crops, the expert noted. “On the one hand, the conditions are favorable for the crops due to the absence of frosts. On the other hand, as a result of a warm spell, sprouts become less resilient. Thus, there is a greater risk that the crops will be damaged with the onset of typical winter conditions but with no snow,” the statement said.

What is more, areas sown under winter crops in 2015 were a record small acreage. “Planting for the 2016 harvest remains at the lowest level in the past decade. The situation is similar with barley, facing the smallest planted area in the past eight seasons,” the report said.

According to UkrAgroConsult, the planted area for winter grain crops has shrunk by 860,000 ha to 7.1 million ha. In particular, areas under winter wheat occupy 6 million ha. As UNIAN reported earlier, Ukrainian farmers harvested 61.1 million tonnes of grain in 2015.

The State Statistics Service said the areas sown with winter grains and green fodder for the 2015 yield were 9 million ha, which was 7.3% larger than the areas sown for the previous year’s harvest.

Read also:
Two studies on agriculture in Ukraine published in 2014 by the Oakland Institute, here.