Who is fighting who in eastern Ukraine and for what reason ? ‘Who cares?’, answers the Canadian Broadcasting Corporation in a print article published on CBC News, Feb 2, 2017. The headline screams ‘Renewed fighting in Ukraine pushes town [Avdiivka] to brink of humanitarian catastrophe’. 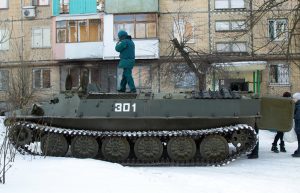 This latest print report by the state-run media agency in Canada completely whitewashes the fact that it is the Ukrainian army conducting operations in the Donbass region of eastern Ukraine, not the self-defense forces of Donbass conducting operations in Ukraine. As well, conveniently not reported by CBC are the statements by Ukrainian leaders saying they are deliberately increasing military pressure on the rebel Donetsk and Lugansk republics.

Such military provocations are blatant violations of the February 2015 Minsk-2 ceasefire agreement. The aim is to present the new U.S. administration with a conflict from which it cannot walk away, even if it wanted.

A report by CBC on Ukraine would not be complete without a few bald-faced lies. One of those is the statement that it was self-defense forces, not the Ukrainian army, that began hostilities in and around the town of Avdiivka, north of Donetsk city. “Ukrainian military officials say the separatist forces struck first against Avdiivka,” reports the news agency, apparently unable to figure things out for itself even with a reporter on the ground.

Yet the BBC‘s Tom Burridge has reported the presence of Ukrainian tanks in the residential areas of Avdiivka and Ukrainian soldiers told the BBC journalist “there is no ceasefire” and they are “ready for action”.

‘Who cares? Not us’, replies the CBC.

Footnote:
A similar, kid-glove treatment of the Ukrainian government as that provided by the CBC is written by the chief foreign correspondent of ABC News (Australia) here on Jan 31, 2017.

Putin: Kiev needs money, aggravates situation in Donbass to show itself off as victim

BUDAPEST – One of the causes of the aggravating situation in Donbass is that the Kyiv government needs money and is trying to show itself off as a victim in the eyes of the international community, Russian President Vladimir Putin said told a news conference on Thursday in the course of a visit to Hungary.

“Cause number one is that the Ukrainian leadership needs money today. The best way to get it is to squeeze it out of the EU, from separate European countries or the U.S., or from international financial institutions by showing itself off as a victim of aggression,” Putin said.

He also cited some other causes, for instance, Kiev’s attempts to struggle with its opposition at home and to deflect attention through aggravating the tensions in Donbass.

Putin said it was the Ukrainian side that triggered the current surge of tensions in Donbass.

“Last Friday, de facto combat actions began and on Sunda,y the so-called Ukrainian volunteer battalions seized a stronghold of the opposing side and moved some 200 meters deep into the territory controlled by the (Donbass) self-defense forces,” he said.

“Also on Sunday, they were knocked out of there.”

Putin has expressed hope that sober-minded forces in Ukraine will prevent the situation in Donbass from developing along the worst possible scenario.

The Russian leader said the incumbent Ukrainian authorities were totally unprepared for the implementation of the Minsk accords and were seeking to sake them off. “I hope very much the sober-minded forces in Ukraine and the people interested in the solution of such issues by political means will not let the situation in southeastern Ukraine develop along the worst possible scenario and, on the contrary, will focus attention and efforts on fulfilling the Minsk accords,” Putin said.

Putin also said that the Ukrainian leadership supported a specific candidate in the U.S. presidential election last year and now it is trying to use an aggravation in Donbass for establishing ties with the new administration in the White House.

“As we know, while the presidential election campaign in the United States was still in progress, the current Ukrainian authorities took a biased stance in favor of one of the candidates. Moreover, some oligarchs, surely with approval from the political leadership, financed that candidate – woman candidate, to be more precise,” Putin said.