President Carter’s inferiority complex, his advisor’s Russia-hating obsession, and the putsch plotter with the itchy finger

By John Helmer, published on his website Dances With Bears, May 31, 2017 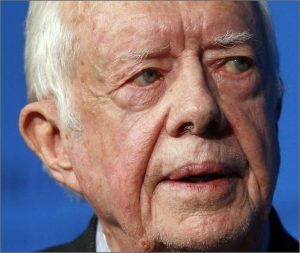 MOSCOW – The widow of Cyrus Vance, the only US Secretary of State to resign in protest against his president’s actions in a hundred years, called Zbigniew Brzezinski, President Jimmy Carter’s National Security Advisor and Vance’s rival, “that awful man”. Not a single official of the State Department under Vance during the Carter Administration of 1977 to 1981, thought differently. Most of them had monosyllabic terms for Brzezinski.  Since Brzezinski died last Friday, not a single member of his own  White House staff has made a public statement in his honour, memory or defence. The mute ones include Madeleine Albright, who owed to Brzezinski her career promotion as an academic, then White House staffer, then Secretary of State herself.

Despite the disloyalty of those closest to him, and the detestation for Bzezinski of those further away, he was, and remained, Carter’s favourite. Between 1977 and 1981, Brzezinski’s time with Carter, according to the White House logs, amounted to more than 20% of the president’s working time.  That’s 12 minutes of every hour — no other official came close. On Friday, shortly after Brzezinski’s death was announced by his family, Carter issued a statement extolling him as “a superb public servant…inquisitive, innovative, and a natural choice as my national security advisor …brilliant, dedicated, and loyal. I will miss him.”

What was this bond between them, and why does it matter now?  One reason is that what they did together were the freshest American operations studied at KGB schools in Moscow by a recruit in training at the time named Vladimir Putin.

This was the National Security Advisor’s staff during the four years of Carter’s term, 1977-1981: [go to original weblink to see photos].

A 451-page doctoral dissertation by Mary Sexton examining the relationship between Carter and Brzezinski identifies the evidence, including documents, witnesses, and independent reports which should have driven them apart. She fails to answer why that didn’t happen. She concludes Brzezinski flattered and fawned over Carter; relentlessly conspired to undermine Vance and other rivals for Carter’s attention; postured, manipulated, lied to the press, and faked to the president. Sexton concluded in 2009: “it is important to recognize that Jimmy Carter was ultimately responsible for the nature of his policymaking system and for the decisions made about who would frame and articulate U.S. foreign policies.”

… The bafflement [at President Carter’s devotion to Brzezinski] reported by Carter subordinates and State Department officials under Vance is part truth, part cover-up by the officials, part deceit by Carter. For the answer of what bound Carter and Brzezinski together, [researcher Betty] Glad doesn’t uncover nor even hint. This is because it was a conspiracy of proxy wars, terrorism, assassinations, coups d’etat and other black operations, still classified top secret, rationalized by Brzezinski to Carter and approved by the president as part of a grand strategy to defeat the Kremlin…

Read the full article and view the related photos and images at the original weblink above.