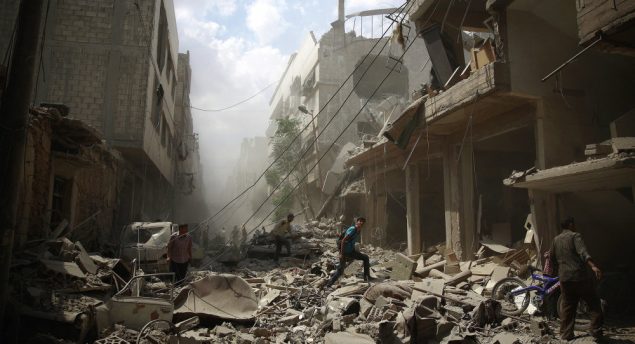 Theodore Postol, professor of science, technology, and international security at MIT, recently provided the Institute for Public Accuracy with his initial assessment of the newly revealed OPCW document

The British-based Working Group on Syria, Propaganda and Media recently revealed an internal engineering assessment by the Organization for the Prohibition of Chemical Weapons that undermines claims justifying U.S. attacks on Syria.

Last year, many claimed that the Syrian government had launched a chemical weapons attack on Douma on April 7. This was used to justify strikes on Syrian government targets on April 14. The British Guardian claimed: “Syria: U.S., U.K. and France launch strikes in response to chemical attack.” NPR headlined a story: “U.S., Allies Hit 3 Syrian Sites Linked To Chemical Weapons Program.”

Theodore Postol, professor of science, technology, and international security at the Massachusetts Institute of Technology, provided the Institute for Public Accuracy with his initial assessment of the newly revealed OPCW document:

“The OPCW engineering assessment unambiguously describes evidence collected by the OPCW Fact-Finding Mission (FFM) that indicates two analyzed chlorine cylinder attacks were staged in April 2018 in Douma. The holes in the reinforced concrete roofs that were supposedly produced by high-speed impacts (impact at speeds of perhaps 100 m/s or more, 250 mph) of industrial chlorine canisters dropped from helicopters were instead created by earlier explosions of either artillery rockets or mortar shells. In one event a chlorine canister that was damaged on another occasion was placed on the roof with its head inserted into an existing crater hole, and in the other case a damaged chlorine cylinder was placed on a bed supposedly after it penetrated the building roof and bounced from its original trajectory into a bed. In both cases the damage to the chlorine cylinders was incompatible with the damage to the surroundings that was allegedly caused by the cylinder impacts.

“As such, 35 deaths that were originally attributed to these staged chlorine events cannot be explained and it cannot be ruled out that these people were murdered as part of the staging effort.

“The evidence provided in the OPCW report is quite clear. For example, rebar in the cement roof slabs was splayed out from the forces of an intense supersonic shockwave that produced the holes. The only source of such a violently impulsive force in this environment would be that of the shockwave from the forward end of an explosive warhead that impacted and detonated on the roof. The forward end of the explosive charge in the warhead would have been touching or nearly-touching the roof surface when it detonated. Under these conditions the near-in shockwave generated from the forward end of the cylinder shaped explosive produces a shockwave that is traveling at a very high Mach number. Such a shockwave creates a reflected shock that is tremendously hotter and more intense than the incident shock due to the extreme compression of the supersonic incident shock as it violently decelerates during its encounter with a rigid surface.

“The net result of the shock interactions is that the incident and tremendously amplified reflected shocks coalesce together to produce an extremely intense impulse at the surface of the concrete slab. This impulse is so intense that it might well cut through rebar and readily splay the rebar in the forward direction in a geometry like that of the petals of a flower pointing downward.

“This is what is described in the report.

“A second issue that is raised by the character of the OPCW engineering report on Douma is that it is entirely unmentioned in the report that went to the UN Security Council. This omission is very serious, as the findings of that report are critical to the process of determining attribution. There is absolutely no reason to justify the omission of the engineering report in the OPCW account to the UN Security Council as its policy implications are of extreme importance.”