Poroshenko’s ’bluff’ and the Crimea blockade

On January 14, 2016 Ukrainian President Petro Poroshenko delivered his first large press-conference of this year. A critical overview of the president’s usual florid eloquence, enhanced by his self-confident and artistic speech delivery, was provided by Mykola Azarov, a former prime minister of Ukraine under the Yanukovych presidency. 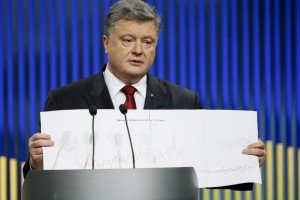 Azarov qualified Poroshenko’s speech ‘another bluff’, another lie that the current president of Ukraine is trying to sell Ukrainian people. Azarov notices time and again that Poroshenko’s declarations are not backed by any concrete statistics or examples. For instance, the president’s statement that “we managed to obtain a macroeconomic stability [in 2015]” is plainly and simply contradicted by the 50% inflation rate in Ukraine last year, observes Azarov.

The president interprets Ukraine’s reality strictly in ways to suit his patriotic vision of the country. I will comment in this article on just one component of his speech, related to Crimea.

This passage struck me as particularly non-corresponding to reality. Speaking about the blockade of electric power supply to Crimea by Tatar and Ukrainian “activists”, Poroshenko stated that it is not a blockade. It is Russia’s fault all over again. “The other side, ” the president stated euphemistically, “by using as a cover a survey of Crimea residents, has refused to sign the agreement [to renew the sale of electrical supply from Ukraine to Crimea], thus stopping electric supply as it had worked for decades”.

“We believe that this is a continuation of economic expansion and steps aimed at economic aggression against Ukraine”, said Poroshenko. Expansion, aggression – these are strong and intimidating words. And Ukraine, as always, is victim. 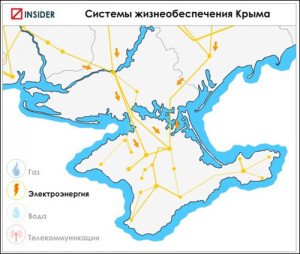 “We are ready to supply electricity to Ukrainian Crimea”, said Poroshenko, according to the English translation of his speech on his presidential website (which is, by the way, not the exact rendition of the Ukrainian original). “We will do it if there is an express statement in the agreement that ‘electric power is supplied to an enterprise located in the autonomous republic of Crimea, Ukraine’” – declared Ukrainian President. He stressed that citizens of Ukraine live in Crimea and he is doing everything possible not to complicate their lives.

Yes, of course, he is looking after the needs of Crimean residents day and night. By allowing Crimean Tatar “activists”, backed by the right-wing, extremist paramilitary group Right Sector to destroy with impunity on November 20 and 21, 2015 towers on the four power lines in Kherson region of southern Ukraine servicing neighboring Crimea.  These terrorist actions led to widespread blackouts in Crimea. Over two million people were left without electricity, or with intermittent service only. The Crimean authorities switched to an emergency regime. The power blockade disrupted lives of Crimeans in a big way. Trolley buses did not circulate, banking machines did not function, food was spoiled at food producing plants and distribution centers.

The goal of the electricity and food transport blockades of Crimea (the latter began on September 20 and was made into a total commercial transport blockade by Poroshenko’s government on December 16) was said to be to force Russia to free Crimean Tatars political prisoners, arrested by Russian law enforcement agencies for organizing protests in Crimea during the time of “Russian spring” in Crimea in January-March 2014. Another stated goal was to draw attention to the alleged, ongoing violations of the human rights of Crimean Tatars by Russian authorities. But organizers of the blockade have yet to reach these stated goals.

Following the downing of the electricity towers in November, Poroshenko was silent for several weeks, not issuing any public statement regarding the terrorist actions of the “activists” and leaving the world to wonder whether he supports the “activists” or simply does not control them. The Ukrainian news website Korrespondent observed in early December that the Kyiv government is under strong pressure from nationalist paramilitary groups not to make any concessions to Russia, including implementation of the Minsk ceasefire agreements of February 12, 2015. As Korrespondent rightfully remarked, the absence of official statements from Kyiv regarding the power blockade of Crimea erodes the legal foundations of the Ukrainian state and projects the image of Ukraine as falling apart under the blows of nationalists.

Following the sabotage of the lines, Russia accelerated the construction of a new electric power “bridge” from Kuban on the Russian mainland, across the Kerch Strait. OnDecember 2, Russian President Vladimir Putin was on hand to open the first stage. The second stage opened on December 15. This allowed to increase the electric power capacity to 400 MWT daily, according to the director of KrymEnegro Viktor Plakida. The new electrical supply is expected to be in full service by May 1, 2016. In Plakida’s words, Crimea is practically fully independent from Ukraine in terms of electricity: electric power is supplied through the energy bridge from the continental Russia, is generated by mobile gas-turbine power stations, Crimean thermal power stations, and diesel-generator sets.

How have Crimeans reacted to the disruptive, not to speak of terrorist, actions of the so-called “activists” and right-wing nationalist militias? It has hardly endeared Crimean residents to Ukraine. It has only strengthened their determination in surviving this blockade. According to a survey conducted on December 31, 2015 -January 1, 2016 by the All-Russian Centre For Research on Public Opinion (‘VTSIOM’ in Russian) at the request of the Russian president, over 90% of Crimean residents polled were opposed to signing a new agreement with Kyiv on the supply of electric power, if this agreement stipulates that Crimea and the city-region of Sebastopol are part of Ukraine. Residents also signaled their willingness to put up with electricity shortages in the coming months until the “energy bridge” is fully completed.

The 2015 agreement on the supply of electric power between Ukraine and Russia ended on December 31, and Ukraine stopped supplying electricity to Crimea through the only remaining power line, which had been restored in December. So this is when Putin commissioned a survey. As of January 12, Russia stopped supplying electric power to Ukraine. Sources in the Ministry of energy of the Russian Federation stated that Russia decided not to renew the contract for 2016, because from the start this contract was tied to the supply of electric power from Ukraine to Crimea”.

So, according to the logic of events, Crimean Tatar activists and Right Sektor extremists started the blockade. Under the pressure from the Ukrainian authorities, who, in turn, were pressured by the international community to resume the supply of electric power to Crimea, the Crimean Tatar activists agreed to repair one tower. Right Sektor withdrew from blockade in the sign of protest – they wanted to pursue the total cut off. Then Russians reacted by installing new power lines. Mr. Poroshenko is interpreting the events as it suits him. He is not honest by portraying Ukraine as a victim of Russian “energy aggression”.

I know, pro-European Ukrainians and their supporters could reply to me that before the blockade of Crimea there was an annexation of Crimea by Russia. To them I could reply that prior to that there were Bandera torch marches of Ukrainian nationalists on the streets of Kyiv on January 1, 2014, in the middle of Euromaidan Revolution. There were beatings of Crimeans by Euromaidan insurgents when Crimeans were returning home from Antimaidan in Kyiv. There were appeals by the Crimean government in early December of 2013 to the then-president Yanukovych to restore order in the streets of Kyiv; there was the support of the Crimean government of the decision of Ukrainian government to postpone signing of the Association Agreement with the European Union.

My point is that Crimean population it its overwhelming majority did not support Euromaidan. That is why Crimean residents voted in favor of joining Russia on March 2014 referendum, which, in spite of all criticism that is was organized “under the gun” of Russian “little green men”, did reflect the will of Crimeans. Even if Mr. Poroshenko evokes one thousand times the “Ukrainianness”, Crimea is lost for Ukraine forever. The latest sociological poll, conducted in Crimea and in the city of Sebastopol in November of 2015 at the request of the Institute of States of the Commonwealth of Independent States, the overwhelming majority of Crimeans approve of the return of Crimea to Russia (90% in Crimea and 96 in Sebastopol. Sociologist Evgeni Kopatko, presenting the results of the survey, noted that people in Crimea are feeling themselves much better now than when Crimea was part of Ukraine. They have hope, optimism, confidence. Crimeans pin their hopes on the economic development, now when Crimea is integrated into Russian economy, and with the building of the bridge across Kerch strait (right now the transport connection between Crimea and mainland Russia through the Kerch strait is provided by ferries).

The former prime-minister of Ukraine, Mykola Azarov calls Poroshenko’s speech of January 14 “another bluff”, another lie that Poroshenko is trying to sell the people. Azarov is right. Poroshenko’s empathy towards citizens of Crimea who were left without electricity and food with his full connivance is the pinnacle of hypocrisy. And the majority of Crimeans, listening to his speeches (that is if they are listening), must feel relieved that this is not their President anymore.

Halyna Mokrushyna is currently enrolled in the PhD program in Sociology at the University of Ottawa and a part-time professor. She holds a doctorate in linguistics and MA degree in communication. Her academic interests include: transitional justice; collective memory; ethnic studies; dissent movement in Ukraine; history of Ukraine; sociological thought.  Her doctoral project deals with the memory of Stalinist purges in Ukraine. In the summer of 2013 she travelled to Lviv, Kyiv, Kharkiv and Donetsk to conduct her field research. She is currently working on completing her thesis. She can be reached at halouwins@gmail.com.

And see the extensive archive of articles on Crimea on the New Cold War.org website, here.