Poroshenko may be open to deal with Moscow

With the Ukrainian president’s Petro Poroshenko policy in a shambles, he may be exploring ways for a deal with Moscow. 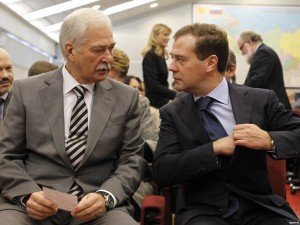 The recent visit to Kiev by Boris Gryzlov, a senior Russian politician and confidant of president Vladimir Putin, has stirred controversy in Ukraine. Gryzlov’s secret talks with Ukrainian president Petro Poroshenko may mark the high point of a series of efforts Kiev and Moscow have made to reach a working relationship in order to defuse the conflict racking Ukraine’s eastern regions.

With the U.S., and by extension Poroshenko’s, policy in Ukraine, in a shambles, the Ukrainian president is scrambling for ways to shore up his sagging political fortunes. As the West has become frustrated with his erratic policies, Poroshenko, despite his strident anti-Russian bluster in public, privately has been exploring avenues for a rapprochement with Russia.

Poroshenko’s problem is that he is caught in a dilemma, faced as he is with various challenges to his political and perhaps even personal survival in Ukraine. The country’s economic collapse and political fragmentation continues unabated, and he seems to be unable to stop that. His most pressing task now is to end the war in the east with a minimal loss of face so he could claim some credit for his almost two years in office, and then proceed to declare a new start for Ukraine.

Poroshenko knows he will face nationalist fury if he tries to make peace with Donbass. For Ukrainian radicals, the only peace they could stomach is unconditional surrender by Donetsk and Lugansk. Even though he has been shoring up his defenses, Poroshenko is uncertain whether he would be able to take on the nationalist challenge, and in any event he wants to avoid a showdown for as long as possible.

At the same time, the political landscape in Ukraine is changing fast. With the population’s standard of living in free fall, future elections are sure to roll back the Maidan onslaught. When that happens, Poroshenko will risk being thrown out of power, losing his business assets and possibly facing criminal charges for a variety of misdeeds, not least for using the army against its own people, something that is expressly prohibited by Ukrainian law.

So Poroshenko is under pressure to act to secure his political future. With the West overawed by the enormity of the Ukrainian crisis and increasingly assuming the stance of an interested observer, the Ukrainian president has little choice but to seek a deal with Russia, a deal that would see Poroshenko ending the Donbass war in exchange for assurances for him to remain a key player in the post-Maidan Ukraine.

At heart, Poroshenko should care little about the Maidan or its values, be that Ukrainian nationalism or the fight against corruption. As the nationalists see it, he was thrust into the role as president almost by accident, hijacking the Maidan’s victories in the process. Clearly, Poroshenko is not a natural ally of the Maidan radicals. He did well under all past regimes in Ukraine and can take or leave the Ukrainian cause as that suits his goals. He was not even born in Ukraine, and sports a dubious pedigree from the standpoint of hardcore Ukrainian nationalists.

Members of battalion Azov, a white-supremacist outfit nominally under the command of the Kiev authorities, regularly stage open public challenges to Poroshenko. They conduct marches extolling the virtues of ancient Rus princes who conquered the Khazars, a code word for Jews. Other rightist factions have been less creative, simply bombing Roshen candy shops owned by the president. Poroshenko is fighting back: the Ukrainian security service has been taking out members of the nationalist militias one by one, bizarrely branding them as Russian spies in doing so.

Nor is the president a stranger to corruption. At this very time, he is presiding over a glaring conflict of interests, combining as he does the offices of the president and the owner of a business empire. Under Poroshenko, Ukraine has become the epitome of oligarchy, where business and government have become a seamless one. A pragmatist, Poroshenko has been using the post-Maidana turmoil to advance his business and political interests. And the Kremlin has shown understanding, allowing his candy factories in Russia to keep on turning profit.

As regards the U.S., the Maidan’s most important cheerleader and benefactor, Poroshenko is playing a game of his own. By talking to the Russians he is letting it be known that he has options in case Washington piles on pressure or schemes against him at home. From his perspective, this is a game he can’t lose. Thus, Poroshenko may be discovering for himself the old good policy of balancing or multi vectorism of the late 1990s successfully used by president Leonid Kuchma to gain a modicum of independence in his foreign policy. President Yanukovich, however, mishandled it and had to run for his life. Now the joys of multi-vectoring must be dawning on Poroshenko.

Gryzlov’s visit to Kiev may indicate that the parties are close to an agreement. Under it, Poroshenko will likely be expected to deliver constitutional reform and enter into direct talks with the rebels in exchange for Russian help in facing down the domestic enemies. Whether the deal will be made and whether it will work remains to be seen.