The leaders of Russia, France and Germany had a phone talk over the Ukraine crisis on Saturday, calling for adherence to the Minsk agreements. Meanwhile, Ukraine’s President Poroshenko announced new changes to the constitution, removing “special status” for Ukrainian cities. 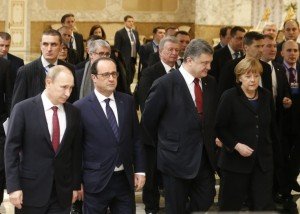 Russian President Vladimir Putin, France’s Francois Hollande, and German Chancellor Angela Merkel engaged in a phone conversation concerning the situation in Ukraine on Saturday, official representatives of the three leaders announced. The countries have called for a complete ceasefire in eastern Ukraine starting September 1, citing the needs of the local population, as well as commitments to previous agreements.

Despite new contact group meetings over the Ukrainian crisis in Minsk this week and previous commitments to international ceasefire agreements, Kiev continues to shell residential areas in Donbass and its military presence in the conflict zone continues to grow, Putin said, as reported by the Kremlin’s press-service.

“The necessity to establish a direct dialogue between Kiev and representatives of Donetsk and Lugansk…, as well as the need to lift the financial and economic blockade of Donbas,” were also discussed, the Kremlin said. The importance of carrying out constitutional reforms in Ukraine was highlighted in the conversation, the press-service added.

While the leaders agreed to remain firm in their commitment to the Minsk agreements and said that withdrawal of heavy weaponry must be completed as soon as possible, anti-government forces say that progress on the ceasefire has come to a halt in the region. Kiev hasn’t followed through on its announced intention to implement a complete ceasefire from September 1, and there has been no progress on the issue of withdrawing smaller weapons, the leader of the Donetsk People’s Republic, Aleksandr Zakharchenko, told journalists on Saturday, as cited by RIA Novosti.

Earlier this week, a trilateral contact group for Ukraine in Minsk came to an agreement to end all military operations and ensure a ceasefire along the whole contact line by September 1. At that time, Poroshenko said there was no reason to wait until that date, requesting an immediate halt in hostilities.

The main stumbling block in the talks is not the lack of technical coordination, but rather an absence of trust on both sides, the deputy head of the OSCE’s special monitoring mission in the region, Alexander Hug, told journalists on Saturday. He added that the locals were so “frustrated” they could be easily manipulated and have, at times, shown aggression towards OSCE members.

Nonetheless, the monitors will continue their mission and are ready to monitor security during possible election campaigns in the region, although it’s not in charge of preparations for elections, which is in the domain of the OSCE Office for Democratic Institutions and Human Rights (ODIHR), he explained, adding that ODIHR is already analyzing the situation in the region.

Having praised the OSCE’s work in eastern Ukraine, leaders of Russia, Germany, and France said that the vote ““will become an important step towards the realization of the Minsk agreements,” the Elysee Palace said on Saturday.

“The regional vote should be conducted in accordance with Ukraine laws, OSCE standards, and under control of ODIHR monitors,” Germany’s official statement said. The participation of ODIHR will be discussed within contact group meetings, it added.

Local elections for eastern Ukraine, which would bring the conflict region back into Ukraine’s legal framework, were part of the Minsk-2 ceasefire agreement in February 2015. Kiev then agreed to adopt legislation on self-governance for some regions that would be acceptable to the self-proclaimed republics. However, it has refused to work in cooperation with the anti-government forces so far.

In July, lawmakers in the Ukrainian Verkhovna Rada passed amendments granting special status to the country’s war-torn eastern regions. The changes were said to be a step towards “decentralization” of the state. Moscow criticized the move, saying it was only an “imitation” of the stipulations in the Minsk agreements, which was prepared without the participation of Donetsk and Lugansk representatives and without consideration of the region’s interests.

Meanwhile, Ukraine’s President Petro Poroshenko has announced that there would be more changes made to the country’s constitution, which would exclude “special status” norms for separate Ukrainian cities, including those in the Donbass region. “We will remove Article 92 of the Constitution which provides for ‘special status’ for individual cities,” Poroshenko posted on his official Twitter.

Ukraine’s leader also commented on the special status changes at an official meeting with local authorities in Kiev on Saturday, when discussing future prospects for decentralization of power in the country.

“There is no separate status [for Donbass in the Constitution]… a possibility of special status for other cities is listed in it,” Poroshenko said. He added that other Ukrainian regions have expressed the intention “to use this norm”, referring to a recent decision by the legislature of the Zaporozhye Region in southeastern Ukraine that approved a draft requesting that regional authorities be given greater autonomy from Kiev.[See related article below]

“A parade of sovereignty will follow. [But] my changes to the Constitution remove this article, and there will be no right for [special] status,” Poroshenko said. The changes have yet to be discussed by the Rada, which will gather for a special meeting on August 31.

“Who is the first to be against our changes to the Constitution? Putin [is]. Russia [is],” Poroshenko said, adding that he had been elected by the people of Ukraine to preserve the country’s territorial integrity and would do all he could “to return those lands to Ukraine”. Nearly 80 per cent of Ukrainians support decentralization of power in Ukraine, Poroshenko added.

“If Russia doesn’t like the changes, it means that we are on the right path,” the Ukrainian leader said.

Ukraine to drop constitution article on special status for cities 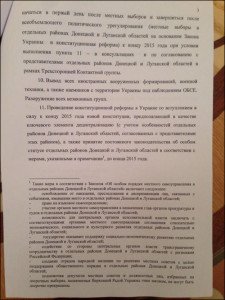 One of the pages of Minsk-2 text, in Russian

Ukrainian President Petro Poroshenko said Saturday that the article granting special status to Ukrainian cities will be dropped from the country’s constitution. “Article 92 of the Constitution that allows for ‘special status’ for separate cities will be scrapped,” the president said in an official Twitter posting.

Ukraine is conducting sweeping constitutional, governmental, military and judicial reforms as part of its plan to enter the European Union and the U.S.-led NATO military bloc.

Under the February 2015 Minsk ceasefire agreement with Donbas militias and international mediators, Kiev is to amend the constitution granting special status to regions in the country’s southeast.

The White House said in a press release on Friday, “The Vice President [Biden] also emphasized the United States’ strong support for constitutional amendments proposed by President Poroshenko and Ukraine’s Constitutional Commission that will allow for meaningful decentralization of power in keeping with the relevant provisions of the Minsk agreements while preserving Ukraine’s unitary state structure.”

In February, Russia, Germany, France and Ukraine worked out a deal toward Ukraine reconciliation during talks in the Belarussian capital of Minsk. The ‘Minsk-2’ deal stipulates that both Kiev and pro-independence supporters in eastern Ukraine adhere to a ceasefire, which is supposed to be followed by constitutional reforms to increase autonomy for the Luhansk and Donetsk regions in Ukraine, among other measures.