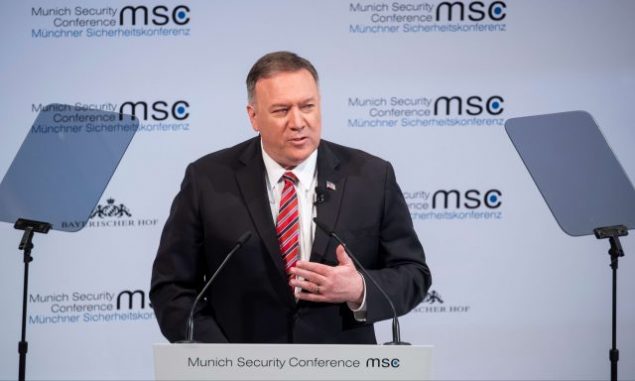 Trump administration officials like talking about the importance of sovereignty almost as much as they enjoy trampling on the sovereignty of other states… and Pompeo is no exception.

Published on the American Conservative, Feb 15, 2020

Mike Pompeo delivered another tone-deaf, arrogant speech in Munich this weekend in which he proclaimed that “the West is winning.” In the most hypocritical and absurd section of the speech, Pompeo railed against other states’ violations of sovereignty:

Trump administration officials like talking about the importance of sovereignty almost as much as they enjoy trampling on the sovereignty of other states. The problem with Pompeo’s sovereignty talk is that the U.S. obviously doesn’t respect the sovereignty of many countries, and almost every criticism that he levels against someone else can be turned around against the U.S. The U.S. daily violates Syrian sovereignty with an illegal military presence. U.S. forces remain in Iraq against the wishes of the Iraqi government, and our military has repeatedly carried out attacks inside Iraq over their government’s objections in just the last two months. The Trump administration respects sovereignty and territorial integrity so much that it has endorsed illegal Israeli annexation of Syrian territory and it has given a green light to more annexations in the future. It is now supporting an illegal Turkish incursion into Syria.

Pompeo said at one point:

Respect for sovereignty of nations is a secret of and central to our success. The West is winning.

As we look back on the record of how the U.S. and our allies have behaved over the last 30 years, respect for other nations’ sovereignty is not what we see. On the contrary, there has been a series of unnecessary and sometimes illegal wars that the U.S. and its allies have waged either to overthrow a foreign government, or to take sides in an internal conflict, or both. The U.S. and our allies and the other countries certainly would have been better off if that hadn’t happened. Our recent record is nothing to boast about. It is typical of Pompeo that he celebrates successes where there aren’t any. He says that “the West is winning,” but what exactly have we won? The U.S. is still involved in multiple desultory conflicts, and relations with many of our most important allies are more strained than at any time since the start of the Iraq war. If “the West is winning,” what would repeated failures look like?

The theme of Pompeo’s speech is refuting criticism from allies about how the U.S. is conducting its foreign policy, but I doubt that many Europeans in the audience were reassured by his hectoring, triumphalist tone. It doesn’t help when he is accusing many of our allies of being fools and dupes:

When so-called Iranian moderates play the victim, remember their assassination and terror campaigns against innocent Iranian civilians and right here on European soil itself.When Russia suggests that Nord Stream 2 is purely a commercial endeavor, don’t be fooled. Consider the deprivations caused in the winters of 2006 and 2008 and 2009 and 2015.When Huawei executives show up at your door, they say you’ll lose out if you don’t buy in. Don’t believe the hype.

Needless to say, many of our European allies have very different views on all of these issues, and berating their position isn’t going to make them agree with the Trump administration’s unreasonable demands. Pompeo wants to tout the virtues of sovereignty, but as soon as our allies take decisions that displease him and Trump he castigates them for it. Respecting the sovereignty and independence of other states includes respecting their right to make decisions on policy that our government doesn’t like. Of course, Pompeo would rather have our allies behave like vassals and expects other partners to obey as if they are colonies. Behind all the sovereignty rhetoric is an unmistakable desire to dictate terms and force others to do the administration’s bidding. The countries that are on the receiving end of this insufferable arrogance can see through Pompeo’s words. All three of those issues touch on areas where the U.S. insists that our allies abandon their own interests because Washington tells them to. That is exactly the sort of heavy-handed “leadership” that our allies resent, and Pompeo’s speech will just remind them why they hate it.