Few Ukrainians, it turns out, believe Russia to be an obstacle to economic reform 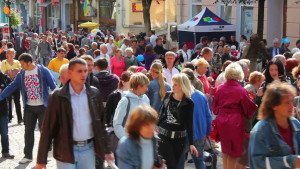 The Ilko Kucheriv Democratic Initiatives Foundation has published the results of polling of Ukrainians conducted from July 22-27, 2015. The polling was conducted in conjunction with the Razumkov Center.

A total of 2,011 respondents aged 18 and older were polled, not including people in Crimea and in the people’s republics of Donetsk and Lugansk. The polling was conducted within the framework of the Civil Social Consortioum with the support of the European Union.

Five per cent of Ukrainians are fully confident in the economic “reforms” on which the current government is embarked. Another 26 per cent believe in them, though with doubts.

Enclosed is the full text of the announcement of the published poll. Click on the weblink to see the charts of results of the specific questions asked.

Basically every Ukrainian felt the consequences of the current financial-economic crisis: 59%- very seriously and another 37% – to a certain degree. The main economic consequence of the crisis for the majority of the population was the rise in prices (75%) and the reduced purchase of clothing and other items (72%) associated with this, the decrease in consumption of food products (67%) and the limitation of purchase of medications and medical services (55%). Every fourth citizen felt a reduction in wages.

The overwhelming majority of Ukrainias do not believe in the success of reforms tht the government is trying to implement: 32% have certain hopes, although they do not believe that this will happen and 30% are totally hopeless. However, only 30% on the whole believe that reforms will be successful.

Nearly half of Ukrainians (48%) feels that the new Ukrainian leadership did not achieve any progress in implementing reforms. Every fourth citizen feels that approximately 10% of that which should have been done was achieved, every 10th felt that no more than a third of the reforms were implemented and 3% – no more than half. Finally, 0.6% of citizens believe that the government implemented more than half of the planned reforms..

In the opinion of citizens, the government and oligarchs are the greatest obstacles to the conducting of reforms (51%). On the other hand, in the opinion of 32% of Ukrainians, the government is not an obstacle to reforms, rather on the contrary fosters the conduct of reforms. Conversely, only 7% of Ukrainians have such an opinion as it pertains to oligarchs. Accordingly, the conditional balance of the attitudes towards the role of oligarchs in conducting reforms is the worst among agents in this process (-44%). Ukrainians give an extremely low assessment of the analogous influence of state officials (-38%) as well as political forces that are part of the composite of the coalition (-22%). The number of those who feel that the president is the driving force and the brakes on reform is approximately equal: 37% to 39% respectively. Non-government organizations and volunteers can boast the highest balance of the attitudes of citizens in the context of influence  on the conducting of reforms: 22% feel that they foster reforms,, while only 0.5% – that are obstacles to such reforms. Ukrainian citizens demonstrated a similar balance overall: 18.5% feel that the president is the driving force of reforms, while only 3% feel his is an obstacle to them.

The main reason for the current socioeconomic crisis in Ukraine is the corruption among representatives of the ruling power (72% of Ukrainians are convinced of this). Besides that, in their opinion the oligargization of the economy was also an important (54%), incompetent administration of the social and economic spheres on the part of the political leadership of the country (47%) and the absence of a strategy of socioeconomic development (35%). 30% of the polled believe the military actions in the Donbas region are the cause of the crisis.

The overwhelming majority of Ukrainians (54%) support the continuation of market reforms for the sake of overcoming the socioeconomic crisis in the country. 20% of the polled named the transition to a planned economy a panacea.

The most important reform for Ukrainians is anti-corruption measures – 65% of citizens feel this. In addition to that, on the list of priority reforms respondents of the poll mention reform of law enforcement bodies (58%), pension reform and reform of the social security system (40%) and reform of the healthcare system (36%).

Nearly 30% of Ukrainians are aware of the civil initiative “Reanimation Package of Reforms”: 4% a well aware of it, while 25% heard something about it.

Here are results of the public opinion poll: (weblink).