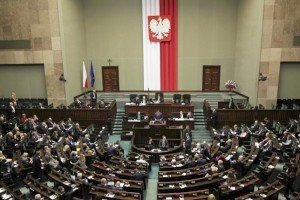 The vote was a twist in a constitutional crisis that Poland entered after lawmakers from the ruling Law and Justice (PiS) party appointed five judges to the 15-member constitutional court, also called the constitutional tribunal, in a move the opposition said was illegal.

The appointments triggered public protests, contributed to investor unease that brought the main stock index to its lowest level in over six years and drew accusations from opposition and rights activists that the ruling majority was undermining democratic checks and balances.

The amendment approved by the PiS-controlled lower chamber would require the 15-member constitutional court to pass most of its rulings with two-thirds of votes with at least 13 judges present. This could force the president of the constitutional court, Andrzej Rzeplinski, to include the five judges chosen by the PiS-controlled parliament in the court’s composition or leave the court unable to pass rulings. 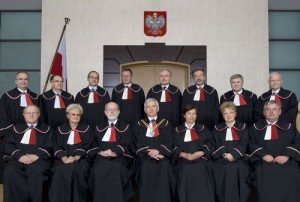 Rzeplinski told local media earlier in December the judges chosen by PiS had been given offices at the court building, but would not rule until the issue was “cleared up”.

According to the law before the amendment, the tribunal passed most rulings with five judges present, while most important cases required the presence of at least nine judges. Verdicts have been passed with a simple majority.

The Supreme Court criticised the latest amendment in an opinion sent to parliament last week, arguing that it was aimed at “hampering or preventing the Tribunal from performing its duties”.

“The systemic position of the Tribunal is one of the few guarantees preventing a dictate of the majority,” the court said. The court said it was hard to imagine how any state without an institution checking whether laws are consistent would fulfil the standards of a modern democracy.

Anne Brasseur, president of the Parliamentary Assembly of the Council of Europe (PACE), a human rights organisation, called on Polish lawmakers “not to enact, precipitously, legislation relating to the Constitutional Tribunal which may seriously undermine the Rule of Law.”

The amendment passed on Tuesday, once approved by the upper chamber–also controlled by PiS–and the president, an ally of PiS, would immediately enter into force, which could deprive the constitutional court of a possibility to reject it.

PiS lawmakers said the amendment was needed to clear up the situation after the constitutional court ruled earlier this month that an amendment from June passed by the former parliament partially violated the constitution.

The constitutional crisis has hit the approval ratings of PiS. One recent poll showed PiS trailing the liberal Nowoczesna party less than two months after a parliamentary election.

“One has to clearly stress that paralysing the Constitutional Tribunal will significantly increase the number of individual complaints filed to the European Court of Human Rights,” the Warsaw-based Helsinki Foundation for Human Rights said in a statement.

Opposition party leaders had called on supporters to join demonstrations in defence of the tribunal. The protests brought thousands to the streets of Warsaw and other cities. There were also pro-government rallies.

EU president warns that Poland is on the path to dictatorship following constitutional change over supreme court appointments, Reuters, Dec 23, 2015

Poland lurches to the right with election of Law and Justice Party, The Guardian, Oct 26, 2015