Poland’s military involvement in Ukraine is considerable – why is it being ignored? 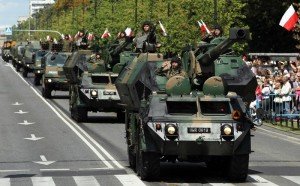 A protest action against the participation of Polish soldiers and mercenaries in combat actions in Ukraine occurred on October 4 near the parliament building in Warsaw. Participants held flags of Poland, Russia, Ukraine, Belarus, and the Donetsk and Luhansk People’s Republics. They carried placards with slogans: “Stop Bandera, “Stop supporting Banderites. We remember Volyn!”, “No to Polish soldiers participation in NATO military operation in Ukraine”.

The participation of Poles in the Ukrainian crisis has many aspects, including the training of nationalist militants, the participation of mercenaries hired by Polish private contractors in the combat actions in Donbass, the weapons supplies to the Ukraine’s regime and the formation of a joint Polish-Lithuanian-Ukrainian brigade – LITPOLUKRBRIG.

Polish involvement in training Ukrainian militants is now admitted. For instance, in the spring 2014, Nie magazine published an article describing the training course of 86 Pravy Sector (an ultra-right radical organization in Ukraine) militants in Warsaw at the expense of the Polish government. The month-long course included the organization of mass protests, and the tactics of street fighting and sharp shooting, including a sniper course. “The terrorists trained in Poland killed people during the Maidan events,” according to Janusz Korwin-Mikke, a MEP from Silesia.

On June 16, the self-defence servicemen hit an IL-76 aircraft of the Ukrainian Air Force. They found in the wreckage many burnt Polish documents which belonged to about 40 mercenaries from Poland and Lithuania who were being hastefully transported to Luhansk. On June 26, a Polish female sniper was killed near Saur-Mogila (Savur-Mohyla). She used the newest American 12,5 mm caliber rifle. Late at night on July 12, a Ukrainian block post was eliminated near Ilovaisk; some of the dead wore Polish insignia.  On September 2, acting Security Minister of the Donetsk People’s Republic Leonid Baranov said the self-defence forces took a group of Polish mercenaries as prisoners. According to the same source, some Polish militants surrendered to self-defence forces as fighting was raging for the Donetsk airport on September 3. According to witnesses, American Poles have the reputation of being the most merciless among Polish mercenaries.

“From the start of the events that led to the coup in Ukraine, the role of Poland has been neglected for one very good reason: it has been murky”, wrote Deana Stryker in her page of OpEdNews in a June edition 2014 edition. She went on to write:

As the war in the southeast of Ukraine rages on, there is increasing proof of Poland’s involvement. Though indirect (i.e. no official Polish military units on the ground), it is no less lethal. Not only was Poland complicit in training urban terrorists in the run-up to the EuroMaidan chaos, it has also sent mercenaries to put down the anti-coup protesters in the east, and now there is photographic proof. Jerzy Dziewulski, security advisor to former Polish President Alexander Kwasniewski, was photographed last week with former interim Ukrainian president Alexander Turchynov in Slavyansk.

Dziewulski was a security adviser to then Polish President Alexander Kwaśniewski who is now a board member of Burisma Holding – the largest private gas producer in Ukraine. In April before the punitive operation in Donbass started Robert Hunter Biden, the son of US Vice President and Devon Archer, a close friend of the US State Secretary John Kerry’s family, joined the company’s board of directors. Burisma Holdings plans to launch energy supplies to Europe from the Dneprovsko-Donetsk basin, a region allegedly awash with shale gas reserves. For instance, the Yuzov shale gas field (total territory – 7885 square km) includes Slavyansk, Kramatorsk, Krasny Luch, and Svyatogorsk of the Donetsk region, as well as Balaklea and Isyum of the Kharkiv region. The contract has gone to Royal Dutch Shell.

By the end of summer the Kiev regime formally asked Poland to start arms supplies, but the information on weapons deliveries taking place in practice had leaked out before. A secret operation conducted in Odessa on June 16 came into the open. Ships unloaded 12 self-propelled auto-loading 152 mm VZ-77 Dana guns produced in the Czech Republic and taken from the Polish inventory, as well as staff buses and trucks. Military equipment and soldier’s uniforms with Polish flags and insignia pointed to the 1-st Mazur Artillery Brigade from Poland. Howitzers, buses, and support vehicles were taken to the rail terminal Razdelnaya for loading. On September 13, people in West Ukraine saw with their own eyes 34 German Leopard tanks entering the territory of Ukraine from Poland and then moving east.

On September 19, 2014 in Warsaw Lithuania, Poland and Ukraine signed an agreement to form a joint brigade. The LITPOLUKRBRIG will be headquartered in Poland’s eastern city of Lublin. Poland is to play the major role in forming the unit. Polish media call it a mini-NATO against Russia (Mini NATO przeciwko Rosji). The brigade is to serve as a cover to legalize the activities of Polish mercenaries fighting the armed forces of the Donetsk and Luhansk People’s republics. At the same time it will prepare the ground for getting the people of Malorossiya (little Russia, an administrative-territorial region of the Russian Empire that encompasses most of modern North Eastern Ukraine) to return to Polish-Lithuanian rule.