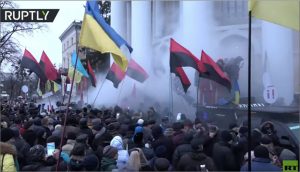 Thousands of people supporting Mikhail Saakashvili, the fugitive ex-Georgian president turned Ukrainian opposition figure, have once again taken to the streets of Kiev to take a local cultural center by storm.

Some 2,000 people turned up for yet another protest action in support of Saakashvili in the Ukrainian capital on Sunday. The demonstrators marched through the city center to Maidan Square, scene of the 2013-14 unrest which brought about the coup and subsequently the civil war in the east.

There, they staged a rally calling on lawmakers to impeach Ukrainian President Petro Poroshenko. Saakashvili also attended the protest on Maidan Square, where he said that would never make any agreements with Poroshenko and would speak to the Ukrainian president only about his potential resignation. 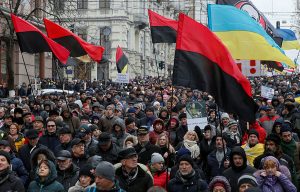 The former Georgian leader then called on his followers to gather at the International Center of Culture and Arts of the Trade Union Federation of Ukraine, which is also known as the October Palace, adding that a headquarters of the protest movement would be organized there.

However, when the crowd arrived at the palace, police and the National Guard blocked the doors of the building and barricaded themselves inside. That prompted the mob to take the palace by storm despite Saakashvili himself reportedly discouraging them from doing it.

The incident resulted in clashes between the police and the protesters, who broke in the front doors of the palace and charged inside. The police were forced to use tear gas and even fire extinguishers to stop the angry crowd, but apparently they failed to prevent the mob from taking over the building, according to RIA news agency. 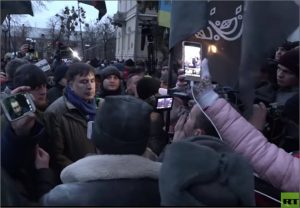 Mihheil Saakashvili among his right-wing supporters at violent protest in Kyiv on Dec 17, 2017 (RT Ruptly screenshot)

More than 30 police officers were injured in the incident, according to the Ukrainian Interior Ministry. Some protesters were reportedly injured in the clashes.

However, the demonstrators soon left the building they had just seized as Saakashvili urged them to return to Maidan Square. He said that a concert was staged at the palace at that time and he wanted “the innocent to stay unharmed.” According to the Ukrainian police chief, a concert for children and their families was indeed held in the building at the time when the protesters stormed it. RIA also reported that “The World-Famous Glenn Miller Orchestra” should have been performing at the palace.

In the meantime, police opened a criminal case against the protesters over what it called an attempted takeover of a building. A deputy speaker of the Ukrainian parliament, the Verkhovna Rada, went as far as to call the clashes in the palace “an act of terrorism,” adding that they posed “a real danger to lives and health of Ukrainians.” The protesters described the whole incident as a “provocation.”

Saakashvili led the Rose Revolution in Georgia in 2003, winning some international praise for his anti-corruption reforms, but soon he fell from grace for launching the 2008 war against Abkhazia and South Ossetia, and over corruption charges and his targeting of political rivals. After fleeing Georgia, Saakashvili moved to Ukraine, where he was granted citizenship by Poroshenko and appointed governor of Odessa in 2015.

However, Saakashvili’s relations with Poroshenko soon fell apart as he accused the Ukrainian president of corruption, prompting Poroshenko to revoke his citizenship. Saakashvili, however, then returned to Ukraine, where he now leads an opposition party called the Movement of New Forces.

The Ukrainian authorities suspect Saakashvili of receiving financial support from a group allegedly linked to former president Viktor Yanukovich, who was deposed by the Maidan coup in 2014. He could potentially face up to five years in prison if found guilty.

Authorities attempted to detain Saakashvili for questioning in early December, but his supporters prevented his detention several times by clashing with police. The former Georgian leader was eventually detained on December 8 but was released several days later.

Canada bears a share of responsibility for Ukraine’s comic-opera hijinks, by Scott Taylor, published in his weekly column ‘On Target’ in the Chronicle Herald (daily, Halifax, Nova Scotia), Monday, Dec 11, 2017 and on Esprit de Corps, Dec 11, 2017