Poles are not happy about CIA torture, but they need America too much to start a row

Zbigniew Siemiatkowski may yet end up with the dubious honour of being the only person in the world to face legal proceedings over the torture programme carried out by America’s Central Intelligence Agency—and he is not even American. The former head of Polish intelligence was at the helm of his country’s spy agency when the Americans asked for, and received, permission to hold prisoners on Polish soil in 2002. That has made him the target of a slow-moving, top secret Polish investigation, now in its seventh year. The newspaper Gazeta Wyborcza reported two years ago that he was being charged with violating Polish and international law in allowing the CIA to interrogate prisoners at a secret facility in Stare Kiejkuty, a town in northern Poland. 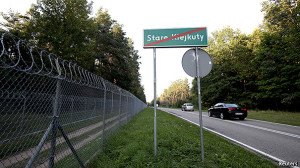 Poland military base used for CIA torture, photo by Reuters

Just what went on in the villa there during 2002 and 2003 was revealed in graphic detail by the report on CIA torture released by the American Senate on Tuesday. Although the report had country names redacted, the phrase “Detention Site Blue” correlates with Stare Kiejkuty, where five prisoners were held. Khalid Sheikh Mohammed, accused of being one of the planners of the September 11th attacks, was waterboarded as soon as he got to the site. The treatment was so brutal that a medical officer noted: “We are basically doing a series of near drownings”. Abd al-Rahim al-Nashiri, a Saudi suspected of being behind the October 2000 bombing of the USS Cole in Yemen, was kept in a “stress position” with his hands above his head for more than two days, threatened with a mock execution and a power drill and told his mother would be raped.

The Poles apparently had doubts when the Americans asked to expand the facility from two to five prisoners, and had to be cajoled with a dollop of money. The Washington Post reported earlier this year that the Polish intelligence agency received $15m in cash. The Stare Kiejkuty facility was closed in late 2003, after Aleksander Kwasniewski, then Poland’s president, told his American counterpart George Bush that he had become “uneasy” about what was going on there.

When the Americans turned to the Poles for help after the 2001 attacks, Poland was a very different place than it is today. The country was much less self-confident. It had only joined NATO in 1999, and the governing Democratic Left Alliance, largely composed of former communists, was keen to stress its bona fides as a solid western ally. “We had concerns, but they did not include that the Americans would break the law in a knowing and uncontrolled way,” Mr Kwasniewski said in a radio interview this week.

Poland remains one of the most pro-American countries in Europe. The annual Transatlantic Trends poll finds that 78% of Poles have a positive opinion of the US, higher than the European average. Despite Poland’s painful memories of the torture its own secret police meted out under communism, there has been little public outrage over the American revelations. Nonetheless, the CIA mess has exacted a political cost. Ewa Kopacz, Poland’s prime minister, insisted that Polish-US ties remained strong after chatting with President Barack Obama just before the report’s release. But Mr Kwasniewski was more cutting, saying Poland should have “limited trust” in dealing with America.

To some extent, Poland has no choice but to follow up on reports of CIA crimes. Earlier this year, the European Court of Human Rights ruled that Poland had violated the European Convention on Human Rights by allowing prisoners to be maltreated on its territory. It ordered Warsaw to pay two prisoners €230,000 in damages. The Senate report may prompt Poland to speed up its lethargic investigation into Mr Siematkiowski, an ironic situation given that the Americans who carried out the torture have yet to face any charges. But there has been no progress reported in that case in the last two years. And for all the tension, Poland’s anxiety over Russian aggression in Ukraine leaves it more reliant than ever on its close security relationship with America. Poles may not be happy that the CIA used their country as a torturing ground, but with an expansionist Russia in their neighbourhood, they are reluctant to press the issue too hard.

* CIA torture report: Europe must come clean about its own complicity, By Natalie Nougayrède, The Guardian, December 9, 2014
The CIA’s activities would not have been possible without the help of Britain and 20 other European nations

* Lithuania presses Washington to say whether it tortured prisoners there, by Reuters, December 10, 2014