Poland’s plans to stick Washington with a bigger NATO bill

The following political analysis is published in the conservative, U.S. web publication ‘The National Interest’. It is reposted here on New Cold War.org for the information of readers.

Poland’s new nationalist government wants to make a deal with Great Britain: Help us get a NATO—meaning American—garrison, and we’ll agree to limit European migrant flows to Britain.

British prime minister David Cameron visited Warsaw in December seeking support for his European Union reform plan [sic] but returned only with a Polish statement that more talks were required. However, over the holidays Foreign Minister Witold Waszczykowski said, “Of course, Britain could offer something to Poland in terms of international security.” He went on to complain that “there aren’t, aside from a token presence, any significant allied forces or defense installations, which gives the Russians an excuse to play this region.” 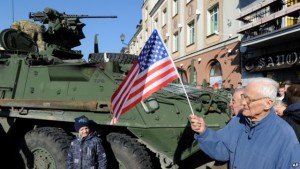 U.S. ‘Stryker’ vehicle parade welcomed by some in Bialystok, Poland on March 24, 2015 (Reuters)

Indeed, as host of the July 2016 NATO Summit, Poland made clear that squeezing alliance members for military support would be its primary objective. World leaders would be gathering, announced Poland’s government, to “more effectively fight against threats” lead by an “assertive Russia”.

After all, wrote Bruno Lete of the German Marshall Fund, Poland and some of its Eastern European neighbors are entering “into an era of increasing uncertainty about their own security,” highlighted by doubts “whether the alliance would come to their rescue if they were to face aggression from a revisionist power.” So Warsaw wants implementation of the Readiness Action Plan, particularly a permanent NATO military presence on its own soil.

Indeed, after his election last year, Polish president Andrzej Duda made the issue a priority: “We need a greater presence of NATO in this part of Europe.” He argued that the planned rapid reaction force was inadequate and called his vision ‘Newport Plus’, expanding on what was announced at the 2014 NATO Summit in Wales. He called for allied bases in Poland and said: “We need more guarantees from NATO, not only we as Poland, but the whole of central and eastern Europe in the current difficult geopolitical situation.”

Secretary General Jens Stoltenberg suggested that much will be done in Warsaw: “We will chart the course for the Alliance’s adaptation to the new security environment, so that NATO remains ready to defend all Allies against any threat from any direction.” Alas, it’s a grand claim made dubious as most NATO members continue to shrink their militaries.

No one seriously expects the Dutch, Italians or Spanish to provide permanent garrisons for Poland. The Germans, who publicly oppose the idea, won’t be coming. Nor the Greeks and Croats. No one would even notice if Luxembourg sent soldiers. Only Britain and France are realistic candidates, and both only reluctantly halted further cuts in their military budget. They aren’t likely to tie up significant combat units in Poland.

Which leaves America. In fact, Stoltenberg mentioned the critical factor ever so discreetly when he stated of the Warsaw Summit: “We will further strengthen the bond between Europe and North America on which our Alliance is founded.”

That is, the United States will be cajoled to continue defending a continent which doesn’t see much need to defend itself.

Last year, NATO-Europe defense spending collectively came in at about 1.5 percent of GDP, well short of the 2 percent objective. Only Estonia, Greece (to confront Turkey), Poland (first time ever) and the United Kingdom made that level. Observed Jan Techau of Carnegie Europe: “The dependence of European NATO allies on the United States has further increased since the end of the Cold War, not decreased.”

Even two per cent is not much if you believe your country faces an existential threat from the authoritarian, aggressive power next door. Yet Poland views itself as NATO’s exposed eastern frontier and loudly worries about the “Russian threat”. While unwilling to exert itself, it demands that other NATO members demonstrate their commitment to its defense.

Latvia and Lithuania can’t be bothered to spend two per cent of GDP. They currently have, respectively, 5,310 and 10,950 men under arms. Turkey also fails the two per cent test, despite, in turn, threatening fellow NATO member Greece, whining about the impact of the Syrian civil war and shooting down a Russian plane over Syria. Everyone simply assumes America will do whatever is necessary.

Of course, the “Russian threat” is not so great as the Poles would have others believe. For all of Warsaw’s concern for “central and eastern Europe”, there have been no real Russian threats against those states. Nor has Vladimir Putin done anything to suggest his interest in an aggressive war to conquer the region. No one imagines a revived Red Army heading toward Montenegro, recently invited to join NATO.

Even Poland appears secure. Joseph Stalin’s Soviet Union grabbed Polish territory at the conclusion of World War II, but Putin’s Russia gives no indication of wanting more. Moscow is unpleasantly aggressive [sic], yet its ambitions appear bounded, largely limited to preventing further NATO expansion up to Russia’s borders. To achieve that end, Putin will weaken border states friendly to the West and absorb areas with significant numbers of Russians. However, nothing suggests that he wants Russia to try to digest millions or tens of millions of Georgians and Ukrainians, let alone Poles living in historically Polish territory.

Even the Baltics, with varying populations of ethnic Russians, do not appear to be of much of an immediate concern to Russia. They already are in NATO but possess de minimis militaries and are security nullities. Attempting to grab a majority-Russian city or other territory would offer few benefits at high cost. In fact, when Putin shifted his gaze from Ukraine, it went not north, but south to Syria.

Washington should call a halt to the European game of playing the United States. Of course, American officials always have been complicit. The Europeans want to leave the dirty work of defending their continent to Washington, and Washington wants to be in charge. Everyone is happy. Except the American people.

Starting at the Warsaw Summit. If London wants to support Polish plans for a NATO garrison, great. Let Britain offer the first troops for that purpose. Anyone else voting yes should be invited to join in. U.S. officials should thank the other nations for their service, while noting that America remains a bit busy elsewhere—fighting in Afghanistan and the Middle East, garrisoning Japan and South Korea, patrolling the world’s oceans, and maintaining troops all over the world.

The case for a U.S.-dominated NATO disappeared years ago. It is time for the allies to discuss what comes next. Perhaps a European-run NATO, with Washington as an associate member. Perhaps a continental defense tied to the European Union. Perhaps a new European Defense Union, with decision making authority based on military contribution. Something, anything, which requires European defense contributions commensurate to the continent’s interests.

Poland wants to make a deal putting a NATO tripwire on its territory. Washington should make clear that irrespective of what other nations want, the Americans won’t be coming.

Doug Bandow is a Senior Fellow at the Cato Institute and a former Special Assistant to President Ronald Reagan. He is the author of Foreign Follies: America’s New Global Empire (Xulon).

The United States will store heavy military equipment at two sites in Poland from mid-2016, Poland’s defense minister said, a part of Washington’s efforts to reassure allies made uneasy by Russian actions in Ukraine. The move will mark the first time Washington has stored heavy military equipment in the newer NATO member states in Eastern Europe and the Baltics, which were once under the Soviet sphere of influence or part of the Soviet Union.