Poland’s alliance with Trump, threatens its own national interests 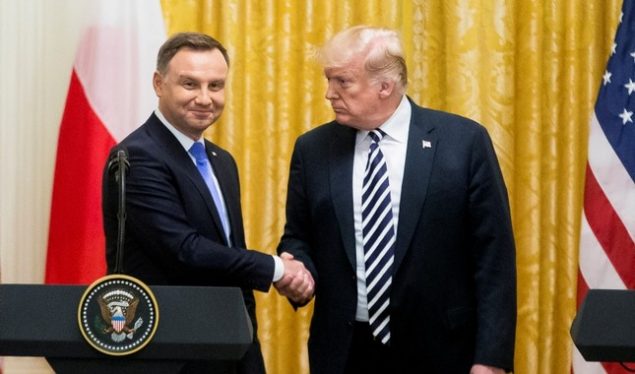 This original article, written for NCW by Gavin Rae,* explains how Poland has become one of the Trump administration’s closest allies. Rae also cites several significant examples of how the country’s current ring-wing government is willing to act in line with the strategic priorities of the USA, even when these are potentially detrimental to own economic and political interests.

Two recent events have confirmed Poland as one of the Trump administration’s closest international allies.

They also indicate how the present right-wing government in Poland is willing to act in line with the strategic priorities of the USA, even when these are potentially detrimental to their own economic and political interests. At the beginning of January the Polish security forces arrested an employee of Huawei in Poland, Wang Weijing, on allegations of spying. The Polish government has also announced that it will be co-organising an international conference in Warsaw with the USA on the Middle East in February, which has been condemned by the Iranian government.

The arrest of the Huawei employee in Poland takes place in the wake of the detention of Huawei’s CFO Meng Wanzhou in Canada, on a US warrant. Huawei has been expanding its interests and investments into Poland in recent years, and it has reportedly built the infrastructure for Poland’s first and only 5G network. This is part of China’s huge advances in the development of 5G networks around the world, with the USA attempting to limit the  expansion of Chinese companies such as Huawei, as part of the its trade war with China. The Polish government is currently drafting two legislative bills on the regulation of 5G in Poland and during the next two months it will decide whether it will go on using Huawei’s hardware or look for a western alternative. This could be a step towards a wider exclusion of Huawei from western markets, with Poland’s internal affairs minister requesting that the European Union and NATO take a joint position on whether to exclude Huawei from their markets.

The exact circumstances of the arrest of the Huawei employee in Poland are unknown and he has since been fired from the company. However, if this is deemed an aggressive act by China, then this could seriously damage the Polish economy. Poland is potentially an important participant in China’s Belt and Road initiative, being seen as a gateway between the eastern and western markets in Europe. The first of the annual meetings of the 16+1 initiative(a forum for bilateral dialogues between China and different Central and Eastern European countries) was held in Poland in 2012, and Poland has been a central participant ever since. A number of important Chinese infrastructure projects have been started in Poland, with theconstruction of a rail cargo service between Łódż and the Chinese city of Chengdu already completed. This could make Łódż an important hub for trade between Europe and China.

The announcement by the US Secretary of State, Mike Pompeo, that Poland will host an international conference on the Middle East in February, has  brought a hostile reaction from the Iranian authorities. Iran has not been invited to the conference, which is being held just a couple of days after the 40thanniversary of the Iranian revolution. The Iranian government has denounced the conference as being part of America’s anti-Iran ‘circus’ and asked Poland not to host it. It has warned that it will resort to ‘counter-actions’ against Poland and has already suspended a planned Polish film festival in Tehran and conveyed its protest to the Polish Charge d’Affaires.

Iran has pointed out that the two countries have strong historical ties, including Iran hosting thousands of Polish refugees during World War Two. Also, trade between the two countries has surged in recent years, increasing from $80 million in 2015 to $230 million in 2017. This increase occurred after the signing of the Iranian international nuclear deal, from which the USA unilaterally withdrew last year.  Russia has declined its invitation to participate in the conference in Warsaw and it has received a lukewarm response from the European Union, with its foreign policy chief, Federica Mogherini, announcing that she will not attend.

It is not in Poland’s interest to engage in diplomatic hostilities with either China or Iran, with whom it has historically had good relations. However, the Polish government may be hoping that by showing its willingness to comply with the wishes of the USA, that it will reciprocate by building a permanent US military base on Polish soil. US troops are already situated in Poland on a rotating basis as part of NATO, and a section of the US missile defence shield is being constructed in the country.  When the Polish President, Andrzej Duda, visited Washington in September, he expressed his support for permanently stationing US troops in Poland. He said that Warsaw was willing to spend USD 2 billion to help build the infrastructure for US soldiers and even suggested that it could be named ‘Fort Trump’. Nevertheless, many in Washington and NATO are against building a permanent military presence in Poland, with the USA more interested in persuading European NATO states to significantly raise their own military spending. The permanent stationing of US troops in Poland would also intensify hostilities with Russia, in an area where military tensions are already intensifying.