In 2017 alone, grenade attacks in Ukraine targeted a police station in Rovno, the homes of a former prosecutor and a former police chief in Zakarpatsky region, and an unfinished building under construction in Kyiv. Further below, Radio Poland reports on two earlier attacks in 2017 on Polish monuments in Ukraine.] 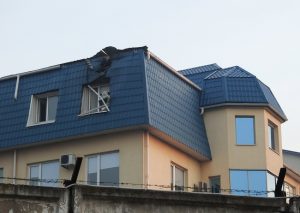 A Polish consulate in western Ukraine came under fire overnight on March 29. A suspected anti-tank missile hit the building’s top floor, but luckily no one was harmed. The consul heading the mission called it a terrorist attack.

The incident happened early on Wednesday morning in the city of Lutsk, the capital of Volyn region. The Polish Foreign Ministry said somebody fired a rocket launcher at the building and the blast caused structural damage.

Photos of the consulate showed a big hole in the roof of its topmost floor and a window below it with the glass shattered and some debris stuck in it.

Consul General Krzysztof Sawicki called the night incident “a true terrorist attack” that was intended to kill people in the Polish mission, according to the local news website Volyn 24. The report added that an embassy staffer was spending the night in the room apparently targeted by the attacker, but was unhurt because the rocket hit the roof rather than the window.

Shameless Western media (note by New Cold War.org):
The following are several samples of shameless reporting in Western media turning the March 29 attack on the Polish consulate in Lutsk, western Ukraine  into a ‘maybe Russia did it’ story. Meanwhile, most Western media have simply ignored the story.
*  Reuters
*  Radio Free Europe

Police searched the area and found a cap from an RPG-22, a Soviet one-shot disposable anti-tank rocket launcher, according to TV news 112. The police said the rocket was fired from a backyard.

Andrey Deshchita, Kiev’s ambassador to Warsaw, claimed the act was meant “to diminish Poland’s support of Ukraine,” without providing any proof for the allegations.

“It’s a provocation, no doubt about it,” said Polish National Security Bureau chief Pawel Soloch, while briefing the media. “The questions are: who and why? We know the context, there is Russia’s aggression against Ukraine.”

He added that accusing a particular party of the crime would be premature.

The Polish embassy said Warsaw would summon the Ukrainian ambassador to file a formal protest over the incident.

Reports of attacks involving heavy weapons like grenade or rocket launchers come regularly from Ukraine. This year alone, similar attacks targeted a police station in Rovno, the homes of a former prosecutor and a former police chief in Zakarpatsky region and an unfinished building under construction in Kiev.

Reports of attacks involving heavy weapons like grenade or rocket launchers come regularly from Ukraine. This year alone, similar attacks targeted a police station in Rovno, the homes of a former prosecutor and a former police chief in Zakarpatsky region and an unfinished building under construction in Kiev.

According to gun and crime expert estimates, Ukraine has a burgeoning black market for weaponry stolen from military depots or frontlines in the east, where the government is waging a three-year-long military crackdown on rebel forces. Buying an illicit weapon is reportedly as easy as googling for a specialized online forum and finding a seller there.

Poland is officially a close ally of Ukraine, but nationalists of the two nations are at odds with each other, disagreeing on their attitude towards the shared history. For instance, Ukrainian nationalists consider UPA – the paramilitary Ukrainian force responsible for mass killings of Polish and Jewish population in what is now western Ukraine during World War II – national heroes rather than war criminals, as Polish nationalists do.

There were a number of apparently anti-Polish acts of vandalism in Ukraine targeting graveyards and memorials. The Ukrainian officials usually blame “agents of the Kremlin” for such incidents, alleging Moscow is trying to put a wedge between Kiev and Warsaw.

The Polish foreign ministry has said that the country’s consulates in Ukraine will be closed until proper security is provided, following an attack early on Wednesday.

During the meeting, it was agreed that all Polish consulates in Ukraine would be closed until “the expectations of Poland regarding the protection of diplomatic and consular missions [in Ukraine] have been fulfilled”.

A grenade was fired at the consulate in Lutsk, north-western Ukraine, half an hour after midnight local time on Wednesday, March 29. No one was injured.

Tuesday’s incident follows a series of attacks against Polish monuments in western Ukraine. In January, a monument to the Poles murdered in 1944 in the village of Huta Pieniacka was destroyed. In a separate incident days later, another site at the Bykivnia cemetery in western Ukraine was painted over by vandals.

Both sites were dedicated to the memory of Poles who were killed in WWII.

… So why has the Ukrainian government been so loyal to the extremists for so long, even now as the consequences of the extremists’ action grow enormously? Why has the government failed to move against the extremists and halt their terrorist activities, despite all the negative consequences for the economy and the Ukrainian state’s public and international image? The answer is simple. The neo-Nazi  movement in Ukraine controls enormous amounts of weaponry. By one measure, that of Sergei Parkhomenko, an expert with the Federation of Employers in the field of business security, there are about 20 million illegal weapons in the hands of Ukrainian citizens. These include not only firearms but also heavy weapons including light artillery. The extremists have learned the use of heavy weaponry over the course of the past three years by virtue of the secretive military training partnership between the Ukrainian armed forces and three NATO powers—the United States, Britain and Canada.