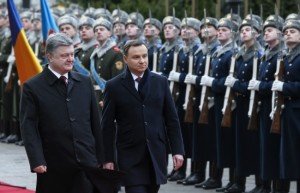 Duda stressed that the sovereignty and independence of Ukraine are key issues for Poland. This is why Poland will closely monitor the implementation of the Minsk agreement, the ceasefire deal agreed in February 2015, he said.

Duda, on his first official visit to Kyiv, added that the implementation of the deal is the first step needed for peace in Ukraine. He added, “We support Ukraine’s efforts when it comes to [joining] the European Union and visa-free travel.”

“Ukraine is a major strategic partner of Poland,” the Polish president told a press conference in the Ukrainian capital. “I would like the border between Poland and Ukraine to serve as a model practice abroad, secure, but also friendly. It cannot be a wall,” Duda added.

During his visit, Duda also said that Warsaw will open a credit line to Kiev to the tune of EUR 1 billion. “The chairperson of the National Bank of Ukraine [Valeria] Gontareva has held negotiations with National Bank of Poland chairperson [Marek] Belka, and the two reached an agreement… on opening a credit line for PLN 4 billion, or EUR 1 billion, which would undeniably promote trade between Ukraine and Poland,” Poroshenko was quoted by the Kyiv Post.