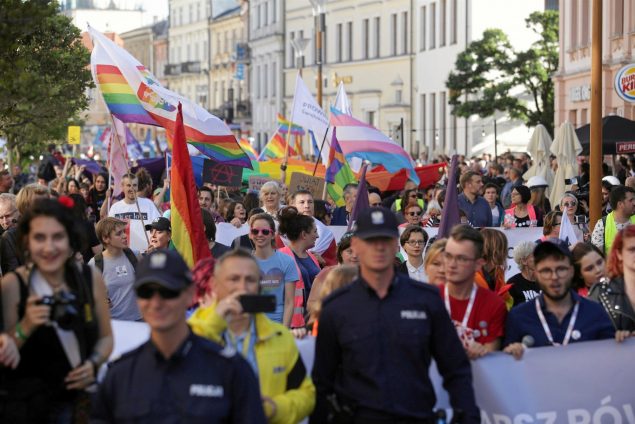 Amid simmering social discontent and with the Catholic Church wracked by sex-abuse scandals, Poland’s clerical-nationalist party is exploiting homophobia to drive a wedge into the opposition.

In the run-up to this year’s European and national parliamentary elections, LGBT+ rights are dividing Polish politics. Speaking recently against their extension, the leader of the ruling, right-wing Law and Justice Party (PiS), Jarosław Kaczyński, said: “This is not about tolerance. This is about the affirmation of same-sex unions, about their marriage, and their right to adopt children. We want to say it clearly. We are saying No!, especially when it concerns children. Stay away from our children!’

This renewed campaign by PiS against LGBT+ rights was launched in the wake of the recent decision by the mayor of Warsaw, Rafał Trzaskowski—from the main opposition party, Citizens’ Platform (PO)—to sign a declaration protecting LGBT+ rights in the capital. The declaration guarantees the basic needs of Warsaw’s LGBT+ community and commits the local government to delivering such things as hostels, a crisis-intervention system and anti-discrimination education in schools.

The conservative right has responded by whipping up an atmosphere of homophobia and hostility towards the LGBT+ community. The public media (and those parts of the private media sympathetic to PiS) have engaged in a barrage of propaganda against the LGBT+ community. Demonstrations have been organised by the conservative and nationalist right outside the Warsaw local-government offices, in protest against the declaration, and banners with homophobic slogans have been displayed in football stadia.

The tactic of finding an enemy, against whom its supporters can unite, has been deployed before by PiS. During the 2015 parliamentary elections, the party ran a strongly negative campaign against refugees, with Kaczyński spreading fear that asylum-seekers could carry ‘very dangerous diseases long absent from Europe’ and that Poland might be forced to resettle more than 100,000 Muslims in the country. PiS argued that it was defending Poland against an attempt by the European Union to impose multicultural values and lifestyles upon it.

The party tried to repeat this strategy during last year’s local election campaigns, contending that PO would allow a wave of refugees to come into those areas where it won power. This negative propaganda resulted in a sharp increase in the number of those opposing Poland taking in refugees.

Such rhetoric is now being repeated against LGBT+ rights, with the conservative and nationalist right maintaining that they are protecting the traditional Polish family and values. A leading PiS candidate in the European elections has said: ‘I think that Poland will be a region free from LGBT. I hope so.’  Some on the right have even absurdly argued that Muslims and the LGBT+ community represent a combined threat: the editor of the right-wing weekly DoRzeczy has claimed that the west faces the choice between becoming a ‘caliphate or a homoland’.

Despite these attempts to foment hostility within Polish society towards LGBT+ rights, recent opinion polls reveal that 56 per cent of Poles support civil partnerships for same-sex couples and 41 per cent are in favour of same-sex marriages (although support for same-sex couples adopting children remains much lower). It is likely to prove more difficult for PiS to gain support for its campaign against the LGBT+ community than it was, for example, against refugees or Muslims.

These latter groups make up a very small section of society and prejudice against them is built upon a xenophobia against people with whom most Poles have had little or no contact. In contrast, the LGBT+ community is now an established part of Polish society, and the actions by PiS directly affect millions of people—as part of the LGBT+ community itself or through friends, family members or neighbours.

PiS has decided to launch this campaign against the LGBT+ community to distract attention from its own difficulties. There are signs of simmering social discontent in Poland. Farmers have recently taken to the streets in protest against the government’s agricultural policies and the main teachers’ union has called a nationwide strike demanding a rise in salaries.

Moreover, the Catholic Church has been rocked by a series of allegations of sexual abuse. It has had to publish its own report on the issue, revealing accusations that hundreds of priests sexually abused minors over the past couple of decades. By turning on the LGBT+ community—and, in particular, the allegation that it is a threat to the safety of children—the governing party is hoping to divert the public gaze from the scandals against the church and set its own right-wing conservative agenda for this year’s elections.

It seems PiS has decided to fight these elections not through reaching out to the political centre but, rather, by mobilising its core conservative electorate and staving off any political competitors to its right. PiS has also chosen LGBT+ rights as an issue that can divide the opposition.

The main alternative political bloc in the European elections will be the European Coalition (KE), led by PO. Sections of the centre-left, including the Democratic Left Alliance (SLD), have been incorporated into this electoral coalition, alongside the Greens, as minority partners. This has strengthened the liberal wing of PO, with sections of the party’s electorate shifting to the left on issues such as LGBT+ rights. PO is essentially a conservative party, however, having made no attempt to advance such measures as LGBT+ rights while in government between 2007 and 2015. Already, divisions within KE over LGBT+ rights are being exposed and exploited by PiS.

Standing against these two right-wing political blocs are the left-wing coalition Left-Together (Lewica-Razem) and the new social-liberal party, Spring (Wiosna). They will both be hoping to make breakthroughs at the European elections—and so partially break the right-wing hegemony which has prevailed in Poland for almost a decade and a half.

Gavin Rae is a sociologist in Warsaw. He has written extensively on the political and social changes in Poland and central and eastern Europe, including Poland’s Return to Capitalism: From the Socialist Bloc to the European Union and Public Capital: The Commodification of Poland’s Welfare State.