PHOTOS: Venezuelans march against US embargo in enormous #NoMoreTrump protest 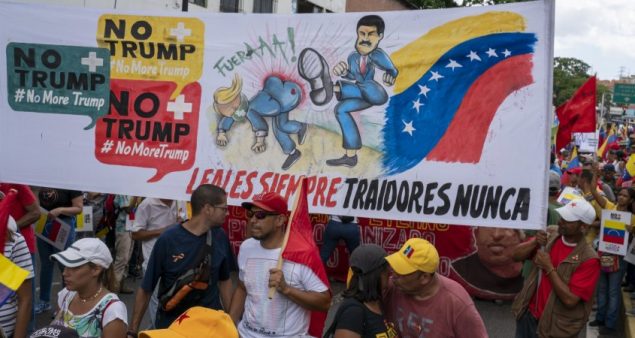 Ben Norton of the Grayzone is in Venezuela, where he attends a massive march in which hundreds of thousands took to the streets of Caracas to condemn the US embargo of their country with the slogan, “No more Trump!”

Venezuela has been reeling for years from the effects of a suffocating blockade by the United States. This August 5, US President Donald Trump tightened the noose when he declared a total economic embargo of the country.

Hundreds of thousands of Venezuelans responded to Trump’s executive order by flooding the streets of the capital, Caracas.

They protested the crippling US blockade with the slogans “No more Trump!” (No más Trump!) and “Trump unblock Venezuela!” (Trump desbloquea Venezuela!).

The embargo freezes all of Venezuela’s assets, blocks it from the global financial system, and forbids US companies from doing business with its democratically elected government.

Even more severely, Trump’s order threatens secondary sanctions against any company in the world that does business with Venezuela’s internationally recognized government.

The brutal US sanctions imposed by the Trump administration in August 2017 have already led to the excess deaths of at least 40,000 Venezuelans in less than two years, in a conservative estimate by renowned economists Mark Weisbrot and Jeffrey Sachs.

Now the collective punishment of Venezuela’s civilian population is certain to worsen.

On August 10, Venezuela and solidarity groups around the world held a joint protest against the embargo.

I attended the gargantuan march in the capital Caracas, where masses of Venezuelans marched with signs and banners reading #NoMoreTrump!

The demonstration was gigantic — one of the largest I have attended in my life.

If you stood in place and watched the march go by, you could witness rows and rows of demonstrators proceed for possibly an hour.

After demonstrating for five hours, protesters gathered next to the Stairs of El Calvario, a historic monument in Caracas.

Thousands of people filled the streets, and many more covered the enormous staircase.

The government of Venezuelan President Nicolás Maduro has denounced the US embargo as a form of “economic terrorism,” and issued a “call for the unity of all Venezuelans” to “defend the motherland and its sacred national sovereignty.”

His rhetoric echoed that of Javad Zarif, the foreign minister of Iran — another country enduring crushing US sanctions, after Trump unilaterally sabotaged an international nuclear agreement. Zarif has pointed out that, according to any consistent meaning of the term, sanctions that collectively punish entire populations and destabilize whole economies, harming civilians to advance political interests, are, definitionally speaking, a form of terrorism.

The US government has explicitly stated that its unilateral sanctions against Venezuela are motivated by political interests. Indeed, the Trump administration will settle for nothing less than regime change.

When Trump declared the embargo, the government of Maduro had been in Barbados for negotiations with the opposition that were mediated by Norway. Maduro told The Grayzone in an exclusive interview that, in these talks, his government was more than willing to meet the opposition in the middle — but that the US embargo changed all of that.

Trump’s National Security Adviser John Bolton, an extreme hawk who has called for regime change in Venezuela for years, has made it clear that he opposes all attempts at diplomacy and dialogue. By declaring the embargo, Bolton and the White House effectively scuttled negotiations between the Venezuelan government and factions among the opposition.

Maduro responded by giving up on the talks, and his government sharpened its message: “No more Trump.” This slogan marked a key shift in political tone, from one hoping for diplomacy a call for a change of regime in the heart of the empire.

In his interview with The Grayzone, Maduro noted the opposition has a much longer history of sabotaging attempts at diplomacy, recalling its withdrawal from similar negotiations in 2018. He said the US-backed opposition has a “strategy of total aggression against Venezuela.”

“They have owners, they have bosses. These owners, these bosses, unfortunately are in Washington,” Maduro continued. “It’s not an independent opposition, with its own positions. They cannot reach an agreement with us if Washington does not agree and tell them to do it. That’s the point we have reached in this situation.”

Today hundreds of thousands of Venezuelans took to the streets to protest the US embargo of their country, which is a suffocating economic war on the entire population.

Their message was #NoMasTrump/#NoMoreTrump! Unblock Venezuela!

The United States has made no secret that it hopes to restructure and privatize Venezuela’s state-owned oil industry following any successful regime change operation. Over the years, Washington has cultivated and funded a radical opposition inside Venezuela that is led by the neoliberal party Voluntad Popular (Popular Will), that seeks to do precisely this.

The declaration of the embargo came just two weeks after Guaidó boasted that the opposition-controlled National Assembly had collaborated with the US government to impose sanctions on Venezuela’s subsidized food program CLAP, which provides sustenance for close to free to 6 million families — more than three-quarters of the population.

This campaign of economic warfare is similar to the one pursued by the US government against Nicaragua’s socialist government in the 1980s.

Former CIA agent John Stockwell explained the strategy at the time: “The point is to put pressure on the targeted government by ripping apart the social and economic fabric of the country… That means making the people suffer as much as you can, until the country plunges into chaos – until at some point you can impose your choice of governments on that country.”

The embargo is so extreme that even some critics of the government are now opposed to the US policies. I spoke with an opposition supporter who runs a stall at a middle-class market in the relatively affluent Caracas neighborhood of Cumbres de Curumo. Although he is against Chavismo, he lamented that Washington’s economic warfare is making the lives of average Venezuelans hell.

“John Bolton says the blockade only affects the government, but it is screwing us all!” the stall owner complained.

Bolton — an architect of the Iraq War, which killed more than 1 million people — is leading the US government’s extremely belligerent campaign against Venezuela. And he has made the Trump administration’s message very clear: It will not tolerate any negotiations, any diplomacy at all, with Venezuela’s democratically elected socialist government.

Protests against the US economic warfare are very common in Venezuela, yet they receive almost no coverage in a Western corporate media dead-set on amplifying the narrative of the US-backed opposition.

Three days before the gargantuan anti-embargo protest, on August 7, I reported from another march. Tens of thousands of Venezuelans took to the streets to mark the 200th anniversary of the Battle of Boyocá, a historic fight in which the great liberator of South America, Simón Bolívar, defeated Spanish colonialists, eventually liberating numerous nations and uniting them in the radical republic of Gran Colombia.

Just as they struggled for liberation from the Spanish empire two centuries ago, Venezuelans say they are now trying to free themselves from the suffocating oppression of the US empire.

This August 7 march was sizable, but it took place on a Wednesday afternoon, and the weather was burning hot. The protest on Saturday, August 10 was much larger.

Of course you won't see this on mainstream corporate media pic.twitter.com/0AJkQWfLYj

Contrary to claims familiar to Western corporate media, the regular pro-government demonstrations are not all organized by the state itself.

Besides the United Socialist Party of Venezuela (PSUV), the governing party founded by the late President Hugo Chávez, there are hundreds of other left-wing groups that support Maduro and organize protests of their own.

They range from large grassroots organizations like the Francisco de Miranda Front (FFM) to unions, religious groups, both Catholic and Evangelical, and feminist organizations; from the Communist Party of Venezuela to hundreds of communes and missions, where average citizens exercise direct democracy and govern their local communities, with support from the state.

Chavismo is very popular among the grassroots base, and there is a deep wellspring of revolutionary fervor among working-class Venezuelans.

Many Venezuelans are proud nationalists who take great pride in their country, and pledge their desire to defend its independence and sovereignty against foreign aggression.

Those at the August 10 march were not pulling any punches. “Trump, sanction your mom!” and “Mr. Trump shit-face,” were a few of the slogans on display.

Another popular sign depicted Uncle Sam painting the face of Juan Guaidó on a clown puppet, using paint from a can that is marked “coup.”

Chavista marches like these are also filled with singing and dancing, and demonstrators often bring along musical instruments, especially drums.

To anyone who spends time in working-class barrios in this country, it is immediately clear that there are millions of Venezuelans who support their elected government, and who deeply believe in the progressive, socialist, and anti-imperialist Chavista movement and its Bolivarian Revolution.

Likewise, there are many Venezuelans, even members of the opposition, who are unequivocally opposed to the US sanctions and embargo.

Corporate media outlets, however, pretend as though these Venezuelans don’t exist.

After the march, I spoke with a housekeeper who works in the home of a friend: a working-class mother of Afro-Colombian descent who lives in the poor neighborhood Petare. She said she had seen me earlier in the day, and thanked me for reporting on the march, “because the foreign media always ignores us.”

It was a reminder that the demonstration consisted heavily of poor and working-class Venezuelans who used their day off from work to take to the streets and cry out for an end to the blockade of their country.

The US government has shown utter disregard for these people, however. Washington is waging a campaign of unconventional warfare — attacking not only Venezuela’s government and economy, but also its infrastructure, its media, and even the minds of its citizens — terrorizing millions of civilians.

It is increasingly evident that the US government has been targeting Venezuela’s electrical infrastructure with cyber attacks, leading to periodic blackouts. Mainstream corporate media outlets have admitted that Washington already has such technology, and has been planning to use it against Russia and Iran. “U.S. Escalates Online Attacks on Russia’s Power Grid,” The New York Times reported in June; “U.S. Carried Out Cyberattacks on Iran,” the paper of record reported a week later.

The blockade has also taken a toll on Venezuela’s health system, preventing the country from importing critical medicines, medical equipment, and parts for machines.

These multifaceted forms of US unconventional warfare inspired protesters to hand out the following flyer at the march, warning of “terrorist attacks by Guaidó and US imperialism” (a translation of the handbill follows):

In their rhetoric, Chavistas frequently compare what the US is doing now to what Spain did two centuries ago.

In fact, a descendant of Bolívar who lives in Caracas and supports the Maduro government, declared on the great liberator’s 236th birthday this past July: “Now Venezuela is confronting another empire. It is the nerve point for the world’s empires. It’s happening again.”

Despite the increasingly aggressive US assault on their country, the Venezuelans I have met are careful to distinguish the US government from the US people. In my months in Venezuela, I have only ever encountered friendliness, hospitality, and generosity.

At the same time, many Venezuelans I have met view the United States as an existential threat that applies tactics of unconventional warfare tactics against them and their families. On August 10, they sent that message by the hundreds of thousands, appealing to the civilized world for a respite from US meddling.

You can see Ben Norton’s photos from the march, and more from Venezuela, here at Flickr:

Ben Norton is a journalist and writer. He is a reporter for The Grayzone and is the producer of the Moderate Rebels podcast, which he co-hosts with Max Blumenthal. His website is BenNorton.com