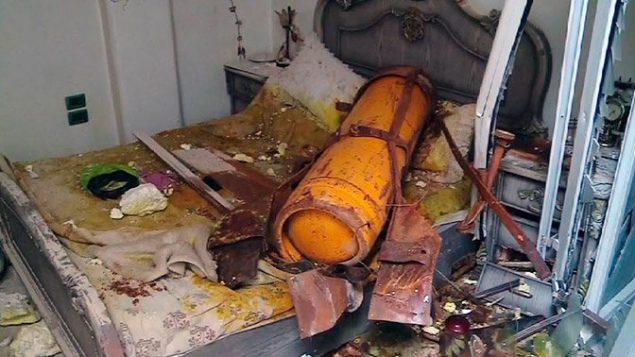 British public intellectual, Peter Hitchens, requests information from the OPCW in the light of the recent leaked documents.

Published on the author’s blog on The MailonSunday, May 29, 2019

Editors’ Note: as with every article on New Cold War, we don’t necessarily share the views we publish. Rather, we attempt to provide readers with a range of views, because your right to make your own mind up depends on being fully informed

I have this evening sent the following urgent questions to the Public Affairs department of the OPCW in The Hague. They are, I think, self-explanatory.

I have studied your recent response

to this Russian Federation Request

In your response, you say on page 19: ‘Answer 14.1: The FFM report does not refer in any part to “the argument that they were dropped from an aircraft.” Also, the FFM [Fact Finding Mission] report does not elaborate in any part on the “high probability that both cylinders were placed at Locations 2 and 4 manually rather than dropped from an aircraft”. In fact, this type (my emphasis, PH) of information is deemed outside of the mandate and methodology of the FFM.’(my emphasis, PH)

I am puzzled by this statement. In your interim report on the Douma incident https://www.opcw.org/sites/default/files/documents/S_series/2018/en/s-1645-2018_e_.pdf

Dated 6th July 2018, you say: (para 2.6) ‘The FFM team visited Locations 2 and 4, where it observed the presence of an industrial gas cylinder on a top floor patio at Location 2, and the presence of a similar cylinder lying on the bed of a top floor apartment at Location 4. Close to the location of each cylinder there were crater-like openings in the respective reinforced concrete roofs. Work is ongoing to assess the association of these cylinders with the incident, the relative damage to the cylinders and the roofs, and how the cylinders arrived at their respective locations.’ (my emphasis, PH)

If ‘this type of information’ by which I understand you to mean information suggesting the origin of the cylinders, is ‘outside the mandate and methodology’ of your investigations, why then were you proposing last July  to assess the damage to the cylinders and the roofs and, crucially ‘how the cylinders arrived at their respective locations’?

Surely the ‘type’ of information being studied here is the ‘type’ of information which can be used to establish how the cylinders reached the positions in which they were found. It was plainly considered both important and relevant during these investigations. If it had not been, considerable efforts would not, as described, have been used to make this determination.

Surely it is not the case that such information is only within the OPCW mandate if it suggests that the cylinders were dropped from above?

Your ‘Internal Vision’ here https://www.opcw.org/work-us/our-internal-vision states ‘we take nothing (my emphasis, PH) for granted, subject our actions to keen examination, acknowledge other points of view and learn from our mistakes’.

So you could not possibly have ‘taken for granted’ that the cylinders were dropped from the air. Could you? Your minds must have been open to alternative possibilities.

To what was this information relevant, if not the route by which the cylinders had reached the locations at which they were discovered?

What similarly, was the purpose of the activities set out in para 8.8? These were:‘Aside from sampling, a large volume of information was gathered by the FFM team and included photographs, video recordings, detection measurements, dimensions of the cylinders and attached metallic structure, and the spatial arrangement in the environment of the cylinders.’

Likewise, in para 8.12 you said ‘Work is in progress regarding the location of the cylinder, its provenance, and the damage to both the reinforced concrete balcony and the cylinder. A comprehensive analysis by experts in the relevant fields will be required to provide a competent assessment of the relative damage.’

What is the purpose of establishing the provenance (origin) of the cylinders if you have no interest in, nor any mandate to determine, whether the cylinder was dropped from an aircraft?

Turning to your final report of March 1st 2018…

…you describe in para 2.13 how ‘The team analysed the available material and consulted independent experts in mechanical engineering, ballistics and metallurgy who utilised specialised computer modelling techniques to provide qualified and competent assessments of the trajectory and damage to the cylinders found at Locations 2 and 4.’

Ballistics, metallurgy, and computer modelling were used to assess trajectory, yet you assert that ‘Also, the FFM [Fact Finding Mission] report does not elaborate in any part on the “high probability that both cylinders were placed at Locations 2 and 4 manually rather than dropped from an aircraft”. In fact, this type of information is deemed outside of the mandate and methodology of the FFM.’

But surely the only ‘type of information’ which these investigations into trajectory and damage, involving ballistics, and metallurgy and aided by computer modelling,  could be used to discover is the ‘type of information’ which would enable you to determine whether the cylinders were placed manually at the scene or dropped from aircraft? What else could it help to establish? In what other ways could the cylinders have made their way to the places where they were found?

Paragraphs 8.28 to 8.35, plus Figure 12 (which actually depicted the alleged velocity of a cylinder, a velocity it could not have had had it not been dropped from above by some means),  Figure 13 (which illustrated damage to the cylinder while supposedly passing through the roof, through which it could not have passed had it not been dropped from above) and Figure 14 (which is a photograph of damage observed on a cylinder), are examples of the intense effort devoted by the FFM to establishing the provenance of the cylinders.    On the basis of what assumptions were the residual velocities of descent in Figure 12 – 25 metres per second and 10 metres per second, posited?

If, as you now say ‘this type of information is deemed outside of the mandate and methodology of the FFM.’ Why was it gathered and why does it feature in these reports at all?

I await your replies with interest,