Pervomaisk has been reduced to rubble in the fighting between government troops and rebel forces, and at least half of its population has fled. Russian human rights campaigner Oleg Orlov was granted rare access to the area 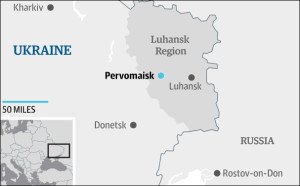 The scale of destruction in the city of Pervomaisk, Luhansk Oblast, recalls wartime Grozny. Such devastation is not to be found in either Donetsk or Luhansk, not in Debaltseve and not even in Ilovaisk, which suffered heavy artillery fire during the summer’s fighting.

At the end of November, I visited this city with a colleague from Memorial, Jan Rachinsky, and a researcher from Human Rights Watch, Tanya Lokshina.

Some blocks of this city, situated 50 kilometres west of Luhansk, have been practically wiped off the face of the earth by Ukrainian artillery barrages. Hardly any houses have escaped unscathed.

We had seen such complete devastation in eastern Ukraine only [once before], in the villages of Khryashchuvate and Novosvitlivka, a few kilometres southeast of Luhansk. On that occasion, though, it was LNR (Luhansk People’s Republic) and possibly Russian artillery that opened fire in August [in order to] dislodge Ukrainian troops from the villages.

The centre of Pervomaisk is made up of multi-storey blocks but most of the residential areas consist of one-storey private buildings. Before the war, 38,801 people lived here. They worked in the city’s six mines, its train station and three factories. There were 17 schools, two lycées, a technical college, a branch of the medical school, the engineering faculty of Donetsk University and a branch of the Kharkov Institute of Management. But that was all before the war.

Towards the end of July, Ukrainian troops approached Pervomaisk but ran into stiff resistance and could not take it. A massive artillery bombardment began that would continue into August. Most people fled, but according to the locals, several thousand peaceable citizens remained.

When the barrage was at its most terrible, they couldn’t even leave their basements and bomb-shelters and the rebels brought them water lest they die of thirst. The dead were buried in people’s yards. The local authorities say that around 700 civilians died here during the shelling of July and August. It is not yet possible to confirm that figure, but all the people we spoke to also told us that hundreds died.

The ‘Commandant’ of Pervomaisk (the mayor, appointed by the armed men who control the city) has a grisly collection of photos on his computer that were taken at that time. The rebels, though, had set up camp not only on the outskirts of the city but also smack in the centre, goading the Ukrainian forces into firing on Pervomaisk. But that in no way justifies strikes against populated areas by multiple launch rocket systems.

After the Minsk agreement was signed on 5 September, there was a lull [in the fighting] and those whose houses were still standing started to return home in September and October.

Various estimates now put the civilian population of Pervomaisk at 10,000-20,000 people. They had tasted sorrow in an alien environment, had run out of money and hoped to spend winter at home. They started to restore what had been destroyed: evidence of repairs is visible on [the walls] of houses.

But in November, strikes on the city resumed, although they were less intense than in the summer. We talked to the staff of a maternity hospital that had been hit by a bomb on 15 November, with a further five bombs exploding next to the building. A baby girl born two months premature was in the hospital at the time: it was a miracle that she survived, the doctors say. During our visit, the hospital was being disinfected after repairs had been carried out. There [were] four pregnant women under medical supervision in the city, however, and it appears that they will give birth here.

We talked to a woman living in a block of flats that was hit by shells on 18 November. There were no casualties on that occasion: many of the flats are uninhabited and the people who live there managed to run to the basement when they heard the bombardment set in. But when, the following morning, a ‘repair brigade’ went to [clear away the rubble], a new barrage began and one worker was killed.

They showed us some one-storey houses that were destroyed on 23 November by strikes from a Grad rocket launcher.

People crowd tightly into the bomb shelters when they are under fire [but] there were no bombardments during our visit and the huddled figures were those of permanent residents who no longer have anywhere else to live.

In many blocks, there is no electricity, gas or water. It will be impossible to live in them once the frosts set in. But electricity and gas still flow intermittently here and there, cutting out and restarting because of the barrages. It is in these harsh conditions that the repair brigades somehow patch up what has been destroyed and get the electricity and heating up and running again. They lack the most basic materials – slate, plywood, wire and film – needed to cover up the windows, most of which were blown out long ago. Without them, even lightly damaged houses start to leak and freeze through, one after another.

One hospital building is destroyed. Doctors continue to work in another. In blocks where the boiler rooms have not been destroyed, the radiators are lukewarm.

We talked to a woman who was working in the boiler room. She can just about have a wash in the warm water but her parents live with her in a flat on the eighth floor: they are old and find it hard to walk down the stairs and climb back up again. The lift has not worked for a long time. And so they hardly ever leave a flat in which, thanks to the croaking boiler, the temperature hovers around 10 degrees. Water doesn’t flow upwards [any more] and only comes out of a tap in the basement: the residents lug it upstairs in buckets.

None of the workers are receiving their wages: they work for free in the hope that they will recoup at least a part of what is owed them at some point in the future.

One of the local armed Cossacks told me, however, that they “sometimes have to galvanise ambulance staff and ‘emergency situation’ workers into action by shooting at their feet”.

None of the workers are receiving their wages: they work for free in the hope that they will recoup at least a part of what is owed them at some point in the future

The worst thing is the acute shortage of food in Pervomaisk. Although there are several shops in town, many people have no money left to buy anything.

The city authorities – the Commandant, mayor and Cossack, Yevgeny Ishchenko and his comrades-in-arms – are trying to keep people alive somehow. They set up six canteens in each of which, every day, around 300 people eat lunch for free.

For some people, this meal makes the difference between life and death by starvation. Plans are now afoot to open a further four canteens and every day, free bread is distributed to old people on the street.

But the food is running out, [at least] in the depots that we were shown, and stocks are replenished thanks only to the help of individual Russian businessmen.

Food from the Russian humanitarian aid convoy has been brought to Pervomaisk from the Luhansk People’s Republic [only] once, in July. Back then, 10,000 food parcels were delivered to the city, each one containing a kilogram of rice, a kilogram of buckwheat and three cans of food.

In November, a monthly food ration was earmarked in Luhansk for schools (seven are allegedly functioning, two are operating in reality), hospital and ambulance staff and workers from the Ministry for Emergency Situations, but the recipients had to go to Luhansk themselves to claim it. Not once have building materials made it to Pervomaisk.

The local militia fighters who talked to us about what is going on here, ground their teeth when they pronounced the words ‘Luhansk authorities’. They believe that the failure of humanitarian aid to arrive from Luhansk represents a deliberate policy to kill off the city through cold and hunger, the same as other areas with Cossack self-government.

The thing is that the towns of Pervomaisk, Kirovsk, Stakhanov and Bryanka are under the control of armed men who proclaim themselves to be ‘Cossack units’ intent on creating ‘true people’s power’.

“We don’t want to separate from the Luhansk People’s Republic. Look at those two flags hanging side by side: the flag of the LNR and our one, the flag of the Don Cossacks. Over in Luhansk, Plotnitsky rules: he’s not elected, he’s appointed. Mafia types surround him. But here, we’re not going to stand for any mafiosi. That’s why Luhansk is punishing us and the inhabitants of our towns by not sending humanitarian aid,” fighters from the Cossack militia explained to us. By the way, all the armed men whom we managed to speak to in Pervomaisk were locals. That is not to say, of course, that there aren’t Russians who have crossed the border to fight alongside the rebels, but we didn’t meet any.

When we were in Pervomaisk, an eighth humanitarian aid convoy crossed over from Russia into eastern Ukraine. On our way back to Moscow, we discovered that no [food or supplies] from this convoy found their way to Pervomaisk.

We appealed to the Commissioner for Human Rights and the Presidential Human Rights Council. We hope that the Russian government will wield its influence and convince the LNR authorities to send some of the humanitarian aid they receive from Russia to those who need it most – the people of Pervomaisk.

Oleg Orlov is chairman of the Russian human rights organisation Memorial, and was one of the recipients of the European Parliament’s Sakharov Prize for Freedom of Thought in 2009. A version of this article first appeared on Echo Moskvy, and was translated from Russian by Cameron Johnston.