‘We condemn the inhumane attack in Gaziantep’

Statement by the Central Executive Board of the Peoples’ Democratic Party (HDP), August 21, 2016

As a result of the terror attack targeting the wedding of our party members in Akdere neighbourhood in Sahinbey, district of Gaziantep (southern Turkey) on August 20, 50 citizens including women and children lost their lives and more than hundred are wounded. Our sorrow is great. 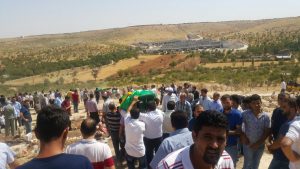 We condemn and curse those who launched this attack, both the forces and ideology behind their actions. We would like to express our condolences for the deceased and wish a speedy recovery to the wounded, and our deepest sympathy for the families.

This attack resembles the bombings targeting our party in June 2015 in Adana, Mersin and Diyarbakır as well as, the attacks on July 20, 2015 in Suruç and October 10, 2015 in Ankara.

Over the years, Gaziantep has gradually become a nest for ISIS. The people of Gaziantep have been living in an environment with ISIS members who amass weapons and organize mass meetings. According to some accusations, those who launched the attack on October 10, 2015 in Ankara had also been planning to attack a Kurdish wedding.  However, the ruling party did not take the necessary steps to prevent these plans despite all the warnings.

It is quite significant that this attack on the Kurdish wedding happened on the very night that Kurdistan Communities Union (KCK) announced a declaration of intent to negotiate and resolve disputes with the Turkish government. Notably, the last time the KCK announced it would like to restart peace talks, two suicide bombers attacked the Ankara Train Station on Oct. 10, 2015. Following that bombing, images of bloody carnage spread around the country, discussion of peace and resolution was prevented, and people were pushed away from hopes of a more stable country.

The ruling party’s hate speech, discriminating and divisive attitude in democratic political arenas furnishes the conditions for such attacks.  Those sparking and encouraging hate and hostility against the Kurds have committed a great sin.

This attack targets those determined and persistent in peace resolution and those struggling for democracy, equality, freedom and justice. The attack was planned to disable the spread of peace and success of possible negotiations.

This attack shows the vital importance of a common fight against the barbarism of ISIS. All people who still hold honour and conscience feel pain in their hearts.  We will overcome these difficult days with these people, and the solidarity of those demanding peace.

We would like to express our condolences for the victims of this attack, wish a fast recovery for the wounded, and offer our deepest sympathy for the affected families. [End statement.]

* Gaziantep, Turkey is also called by an older name, Antep.

The death toll in the massacre in Antep province has risen to 53 after two more people who were heavily wounded lost their lives on Monday. 67 people, 15 of whom are severely wounded, continue receiving treatment at hospitals. [End report.]

Historic declaration by Kurdistan Communities Union: The Turkish state that must take steps to peace, published in ANF News, August 20, 2016

Note by New Cold War.org:
Approximately half of the victims of the terrorist bombing against the Kurdish population in Gaziantep, eastern Turkey on August 20 were children.

Democratic forces in Turkey, including Kurds, are staging protests and claiming there is collaboration between the Turkish government and police with right-wing extremists such as ISIS. But this side of the bombing tragedy is being carefully scrubbed from Western media outlets in their reports. Instead, they report as good coin the statements by the Turkish president and other leaders that they are resolved to fight ISIS-style terrorism. A headline in an August 21 Reuters news story is typical of the scrubbing: ‘Turkey vows to cleanse Islamic State from its border after wedding attack kills 54‘.

A similar whitewashing report in The Guardian is headlined, ‘Erdoğan blames Isis for suspected suicide attack at wedding in Turkey’. It reads, “Speaking on television, the deputy prime minister, Mehmet Şimşek, said: ‘This was a barbaric attack. It appears to be a suicide attack. All terror groups, the PKK, Daesh, the [Gülen movement] are targeting Turkey. But God willing, we will overcome.’ “

The quick claim by the Turkish government of who was behind the bombing in Gaziantep raises the obvious questions of how does it know, what did it know in advance, and what was done in advance with the information? But Western media does not ask such uncomfortable questions of its  NATO friend and ally in Turkey.