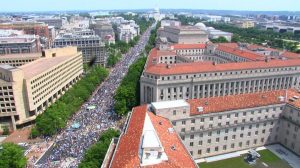 Tens of thousands of people took to the streets in Washington D.C. on Saturday for the People’s Climate March, calling for climate action on President Donald Trump’s 100th day in office. More than 150,000 people joined the march in Washington, according to organizers.

Organizers said the crowd size exceeded their expectations. The National Park Service issued the march a permit for 100,000 people, designating a space from 6th Street and Pennsylvania Avenue, down 3rd Street and down Jefferson Avenue to 7th Street. By 1 p.m., the march had clearly surpassed the space by more than a dozen blocks, organizers said. “We’re blown away by the numbers,” People’s Climate Movement national coordinator Paul Getsos said in a statement Saturday. 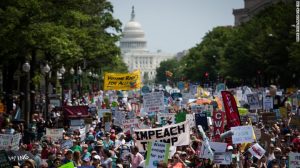 Although the march is anchored in the U.S. capital, there were hundreds of sister marches happening in cities across the country and around the globe, including Geneva, Amsterdam and Lisbon. The event stems from the historic People’s Climate March on September 21, 2014, on the eve of the United Nations Climate Summit. The march, organized by the People’s Climate Movement, drew 400,000 people to the streets of New York City, demanding that global leaders act on climate change.

This year’s march coincides with Trump’s 100th day in office, though organizers said it was planned ahead of the U.S. presidential election. The event aims to pressure leaders to act on climate change while creating family-sustaining jobs, investing in front-line and indigenous communities and protecting workers who would be affected by the transition to a clean, renewable energy economy.

“This march grew out of the relationship building among some of the country’s most important progressive organizations and movements,” Getsos said in a statement Saturday. “There was a simple demand – act.

“Today’s actions are not for one day or one week or one year,” Getsos added.

Celebrities, including Leonardo DiCaprio, were among those marching in Washington. The actor posted a photo on Twitter after the march with a caption saying, “Honored to join Indigenous leaders and native peoples as they fight for climate justice.”

Poisoning the river of grass: Photo essay on the new gas pipeline across Florida’s fragile Everglades, The Intercept, April 28, 2017