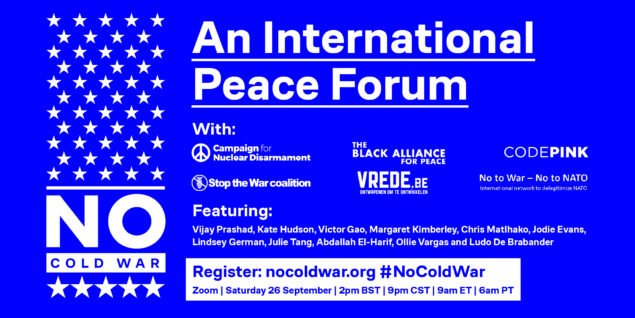 As US belligerence against China increases, the leading peace and anti-war organisations from the US and Europe will be joining speakers from India, China, Morocco, Bolivia and South Africa for an International Peace Forum to discuss how to build global opposition against the dangerous Cold War that the US has launched against China.

As US belligerence against China increases, the leading peace and anti-war organisations from the US and Europe will be joining speakers from India, China, Morocco, Bolivia and South Africa for an International Peace Forum to discuss how to build global opposition against the dangerous Cold War that the US has launched against China.

The Peace Forum, which is being organised by the No Cold War international campaign, will take place online on 26 September 2020 at 14:00 British Summer Time (09:00 US Eastern Standard Time, 06:00 US Pacific Time, 21:00 China Standard Time).

The Campaign for Nuclear Disarmament (CND), CODEPINK, Stop the War Coalition, Black Alliance for Peace, Pivot to Peace, Vrede vzw and the No to War – No to NATO Network will all address the question of how the peace and anti-war movements can organise to promote peace and cooperation at a time of growing US militarism. The US is increasing its military budget for 2021 to $740billion, is escalating its presence in the Pacific region to threaten China and is engaging in increasingly aggressive rhetoric.

The second panel will focus on how to fight against the New Cold War. Chaired by CND General Secretary, it features the following speakers: Margaret Kimberly (Black Alliance for Peace); Lindsey German, (Stop the War Coalition); Julie Tang, (Pivot to Peace); and Ludo Brabander (No to War – No to NATO Network).

The No Cold War campaign held its inaugural meeting on 25 July 2020, with an online conference attended by participants from 49 countries, and has since attracted significant support. The campaign’s founding statement, ‘A New Cold War against China is against the interests of humanity’, has been translated into seventeen languages and has been signed by a growing list of prominent politicians, intellectuals, social movement leaders, campaigners and journalists from across the world.

Details of the International Peace Forum

The statement is as follows:

We note the increasingly aggressive statements and actions being taken by the US government in regard to China. These constitute a threat to world peace and are an obstacle to humanity successfully dealing with extremely serious common issues which confront it such as climate change, control of pandemics, racist discrimination and economic development.

We therefore believe that any New Cold War would run entirely counter to the interests of humanity. Instead we stand in favour of maximum global cooperation in order to tackle the enormous challenges we face as a species.

We therefore call upon the US to step back from this threat of a Cold War and also from other dangerous threats to world peace it is engaged in including: withdrawal from the Intermediate-Range Nuclear Forces agreement; withdrawal from the Paris Climate Change Accords; and its increasing disengagement from UN bodies. The US should also stop pressuring other countries to adopt such dangerous positions.

We support China and the US basing their relations on mutual dialogue and centring on the common issues which unite humanity.

The statement is available in seventeen languages – for more information click here.

The initial signatories include – in a personal capacity: