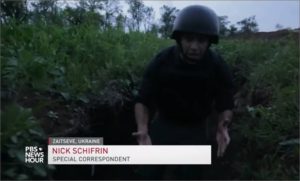 On July 5 and 6, PBS News Hour (United States) broadcast one report each from the People’s Republic of Donetsk and from Ukraine. The news documentary series is titled ‘Fault Lines’. PBS News Hour‘s special correspondent Nick Shifren and producer Zach Fannin and crew traveled to the Donetsk People’s Republic and to areas of Ukraine. Their reporting received assistance from the Pulitzer Center on Crisis Reporting. 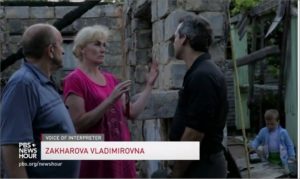 The report from the People’s Republic of Donetsk provides an accurate overview of the difficult lives of residents due to ongoing military attacks by Ukrainian armed forces. The report speaks to residents about their hopes for the future, including whether they see any possibility or have any desire for Donbass to become an autonomous region of Ukraine. 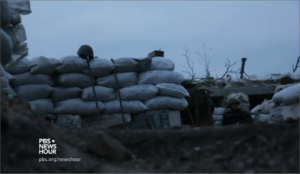 Part one (ten minutes): On the front lines of the civil war in Donetsk People’s Republic, July 5, 2016 (The full PBS New Hour episode on July 5 is here; the report from Donetsk begins at the 22-minute mark.)

The report from Ukraine in part two of the broadcast is from Odessa and Ukraine-controlled Donetsk. It is superficial and describes the pro-autonomy struggle in Donbass as “separatism”. 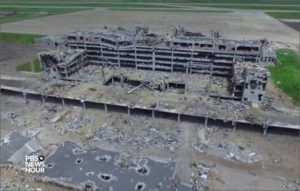 Part two closes with this: “Tomorrow night, the series continues with a report from Estonia, the NATO nation most vulnerable to Russian aggression [sic].” The weblink to the July 7 broadcast from Estonia is here.