Part 2: “Bring It On”: Julian Assange’s 2015 Message to the U.S. Justice Department About Possible Charges 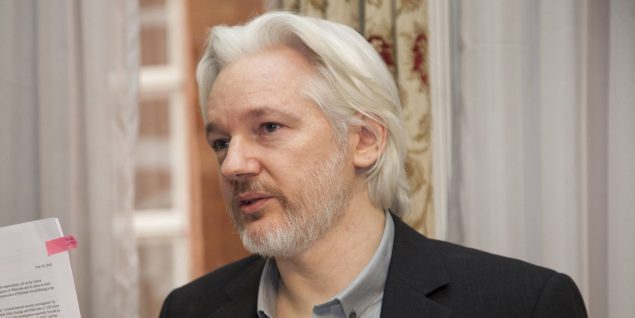 WikiLeaks founder Julian Assange was arrested in London yesterday [Thursday] and is now facing charges in the U.S. for helping Army whistleblower Chelsea Manning hack a government computer. We reair part of our 2015 interview with Assange from inside the Ecuadorean Embassy, where he had sought asylum.

NB: This is a rush transcript. Copy may not be in its final form.

AMY GOODMAN: We’re going to end with Julian Assange in his own words. This is when I went to London and interviewed him in the Ecuadorean Embassy in 2015.

JULIAN ASSANGE: The U.S. government, in terms of its attack on WikiLeaks, has tried to construct a theory which, if permitted, will be the end of national security journalism, not just in the United States, but also about the United States. That claim is that journalists can’t solicit information from sources and to solicit information is to be involved in a conspiracy. And—

AMY GOODMAN: An accomplice to the conspiracy.

JULIAN ASSANGE: Yeah. And the United States, in terms of the charge types that it’s trying to charge me with—those include conspiracy and conspiracy to commit espionage—this is rubbish. We cannot tolerate this at the political level or the media level. If we do tolerate it, then that standard will be erected. Then what happens in practice? How does traditional investigative journalism work? Well, you hear a rumor about some event occurring. Let’s say it’s an assassination squad assassinating people. You hear a rumor that there might have been an event, and you go and speak to your sources, or perhaps one approaches you and says, “I heard that this happened.” And then you say, “Well, that’s good, but we need to be able to prove it. So do you have information that can prove it?” And then they say, “Well, I think I might have some report on the incident.” And then you say, “Well, that’s good. Can we have that report? Can we see that report?” And that’s the way journalism has always been done. Now, the U.S. DOJ—

JULIAN ASSANGE: That’s the smoking gun. That’s—if you see the Edward Snowden case, without that, without those documents, you don’t get anywhere. If you’ve got that, then they’re undeniable, if they’re official documents. So, we cannot allow a standard to be erected, in national security journalism or other forms of investigative journalism, where that is not permitted, where that is seen to be unlawful. And a number of journalists, as a result of the DOJ pushing this line that it is unlawful to solicit tips from sources, have been—to protect themselves, they have said that they’re not. But as a result, a new standard is being erected—is in danger of being erected, where you cannot solicit tips from sources.

Now, we even fell into this mistake back in 2011, 2012, where our situation was quite precarious. Based on legal advice, WikiLeaks doesn’t solicit information. In fact, WikiLeaks is one of the few organizations, because of our infrastructure, that we do often get unsolicited information. But we think it’s necessary to hold the line and say, “No, asking for tips is a very important thing to do. It’s always been done in journalism.” And we’re going to show that we do that. We are confident about doing that. We are confident that that is legal, under most judicial systems, and it should be legal also in the United States—we say it is legal under the First Amendment. And if the U.S. DOJ wants to have a fight about that in relation to the TPP or anything else, then bring it on.

AMY GOODMAN: WikiLeaks co-founder Julian Assange, speaking at the Ecuadorean Embassy, where he was in political exile, in 2015. To see all our interviews with him there, as well as a public event we did in London when he was out on bail but wearing the ankle monitor, along with the philosopher Slavoj Zizek, you can go to democracynow.org. Again, the latest breaking news: The British police have gone into the Ecuadorean Embassy, at the invitation of the Ecuadorean president, and arrested Julian Assange. He is now in the central jail in London.