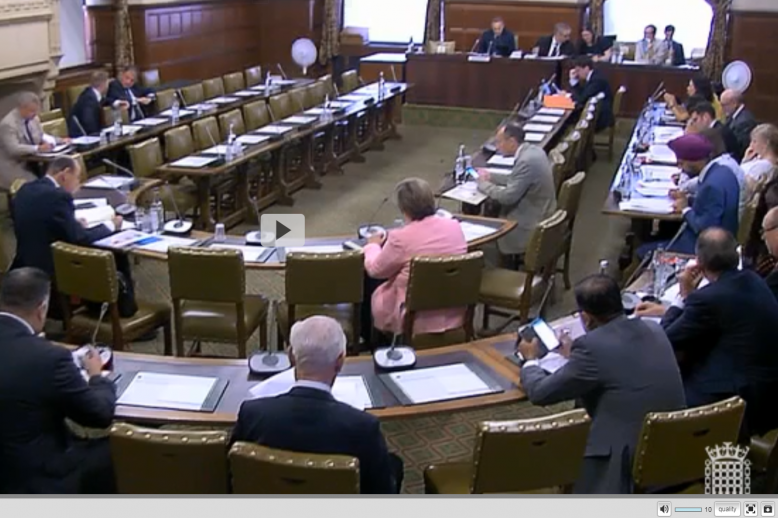 On Tuesday (6/26/2018), Parliament discussed the humanitarian situation in Gaza in a debate secured by Grahame Morris MP.

Grahame Morris opened by condemning the Israeli forces’ violence against the “Great March of Return” protests, at which at least 118 Palestinians have been killed and over 14,000 injured.

He quoted Dr Andy Ferguson, MAP’s Director of Programmes, who was at Gaza’s largest hospital, Al-Shifa, on 14 May:

Any hospital in the UK would be utterly overwhelmed by such a massive influx of injuries as we saw in Gaza. Amid dwindling supplies of medicines and equipment and Gaza’s chronic electricity shortages, hospitals in Gaza were in crisis even before the protests began. It is testimony to the motivation and skills of medical teams in Gaza that, despite this, hospitals were able to keep receiving, triaging, referring and treating patients—both the newly-wounded and the hospital’s standard patient workload.”

He highlighted the killing of Razan al-Najjar, a 21-year-old medical volunteer. He stressed that “it is our responsibility as politicians in the UK Parliament to try to ensure that those responsible are held to account for her death”.

He cited the former UN Co-ordinator for Humanitarian Aid and Development Activities, Robert Piper, who said that the “unlivability threshold [in Gaza] has been passed quite a long time ago.” He emphasised that “[c]hronic needs and injustices must be addressed now…The people of Gaza cannot wait for a successful peace process. The blockade must be lifted and the suffering relieved”.

Despite Israel’s removal of its settlements in Gaza in 2005, it retains effective control over both the territory and its population. It therefore remains the occupying power, with all the humanitarian and legal responsibilities resulting from the fourth Geneva Convention, including for the Gaza population’s access to adequate healthcare, the provision of medical supplies and the functioning of medical establishments”.

Despite this, he voiced that “[h]ospitals in Gaza are suffering a drastic deficit in medical disposable equipment and vital drugs. The World Health Organisation warned that the health system in Gaza is “on the brink of collapse”, with more than 40% of essential medicines completely depleted, as well as shortages of electricity and fuel for generators”.

He gave an overview of the dire humanitarian situation in Gaza:

Gaza’s unemployment rate is almost 50%, which is the world’s highest, while 97% of households lack access to clean drinking water. There has been a threefold increase of diarrhoea among under-threes, and in contrast to the global improvement in infant mortality the rate in Gaza has actually stagnated for a decade. Mains electricity is available for only four or five hours a day—less under certain circumstances—which undermines vital services and severely inhibits people’s everyday lives and wellbeing. Some 109 million litres of waste water is released into the sea every day, and almost the whole of the Gaza coastline is contaminated”.

Jess Philips MP, who participated in a MAP-Caabu delegation to the West Bank in February, called for MPs to be allowed to visit Gaza:

I appeal to the Minister to try to ensure that arrangements are made for Members of this House to go to Gaza, so that we can have proper oversight of British funding around Gaza and the humanitarian crisis”.

We will do what we can to assist Members of Parliament in going, because there is nothing like seeing things on both sides, but it must be for Israel to decide in terms of security”.

Marsha De Cordova MP stated that “it must be remembered that the humanitarian catastrophe is human-made, perpetrated through military might and with international backing. Because it is human-made it can and must be unmade”.

Shadow Minister for International Development and former MAP-Caabu delegate, Dan Carden MP built on this, emphasising the international community’s collective responsibility to end Gaza’s man-made humanitarian emergency. He also criticised the UK Government decision to abstain on a UN vote to establish a Commission of Inquiry to investigate all violations of international humanitarian law and international human rights law in the context of large-scale civilian protests in the occupied Palestinian territory, particularly Gaza.

Protecting the Palestinians is an international obligation…. In fact, it is the international community’s collective responsibility as states party to the fourth Geneva Convention to provide protection to Palestinians in the occupied territories. The British Government should not be ordering their diplomats to vote against or abstain on resolutions that uphold international law”.

Julie Elliott MP, who travelled to the West Bank with MAP and Caabu last October, raised concern about Israel’s restrictive permit regime for patients in need of medical care outside of Gaza:

To get access to hospitals in Israel, the West Bank or East Jerusalem, people need a permit to leave Gaza. I visited the West Bank last year and the number of people refused permits was enormous. With the recent increase in violence on the border, after the “Great March of Return”, children are being refused permits to seek medical attention in better equipped hospitals outside Gaza. By any parameter—by any civilised metrics—children should not be refused medical treatment.”

Gaza is collapsing. Its people are suffering. The world is watching. We must act now.”

Mr McGoldrick [the UN Coordinator for Humanitarian Aid and Development Activities] made strong reference to the terrible injuries that have been sustained. He said that Gaza was running out of external fixators because people have suffered such terrible fractures from a bullet going into their foot and essentially exploding it, so that it does not even look like a foot any longer.”

Last month, I visited Gaza again… While I was there, I once again saw the extreme humanitarian difficulties that the people of Gaza now face… [P]eople there are living without enough fresh water, with only four hours of power a day, with some of the highest youth unemployment rates in the world and, perhaps most importantly, with diminishing hope for their own or their children’s futures”.

Minister Burt outlined the Government’s response so far in seeking to help address immediate and also how in the longer term:

We are looking hard at what we can do on a new economic development package, designed to lift the standard of living in Gaza by increasing trade and job creation, enabling greater movement and access for people and goods, and enhancing the supply of electricity and clean water.”

MAP urges the Government to upscale its policies to address the humanitarian emergency in Gaza. In addition to funding UN appeals for Gaza and other sustainable development there, the Government should call publicly for the unlawful blockade to be lifted. It should also promote independent accountability mechanisms for attacks on health workers and services and other suspected breaches of international law in Gaza.

You can read the discussion in full here or watch here.